It's a grab bag of Bazooka this week kids!  Here's some Bazooka eye candy I think you will all enjoy.

Wesley Morse drew Bazooka Joe comics for Topps for less than a decade (1954 debut) and then they figured out how to stretch is work even more after he died in 1963-his drawings ran until 1982!  It looks like he did some other work for Topps as well, take a gander at the line work and style on this envelope:

I'm not positive but I think the 2 cents US postage metered rate ended sometime in 1958, so this looks like a mid 50's envelope.  That traffic cop looks just like an amalgamation of Sarge and Herman from Bazooka Joe,  doesn't it? 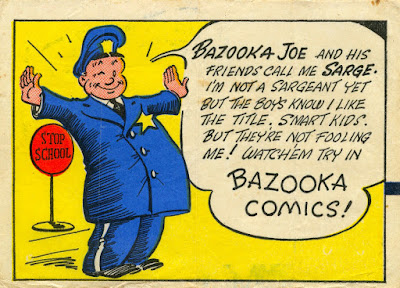 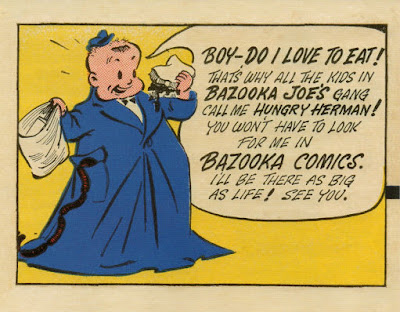 I recently found a true date attribution for the Bazooka U.S. Presidents package design set.  It was described in Woody Gelman's Card Collector as a 1962 issue and I think in the few guides that covered it over the years but it's from 1960. That makes total sense given it was a presidential election year.

In 1969 Topps experimented with a foil Bazooka wrapper on what may have been a test of a nickel roll twin-pack (dig the markdown from Grant's), harkening back to the product launch in 1947: I have no idea why they did this, nor why they brought back the sepia comics of yore: 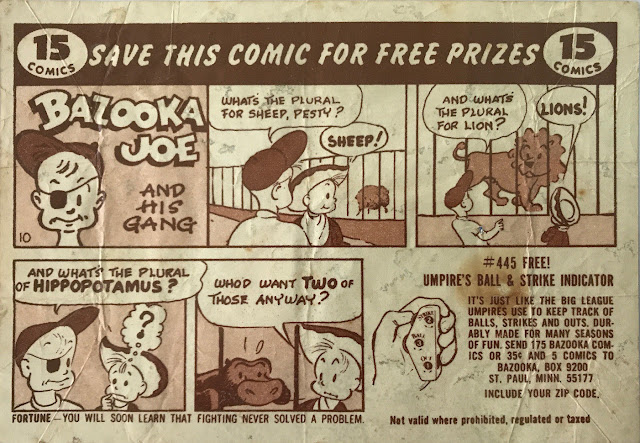 Finally, on the heels of last week's waxy insert post, I thought I'd revisit this 1973 Bazooka comic inserts showing how Topps would sometimes gyp the kids with an ad instead of Bazooka Joe and His Gang: 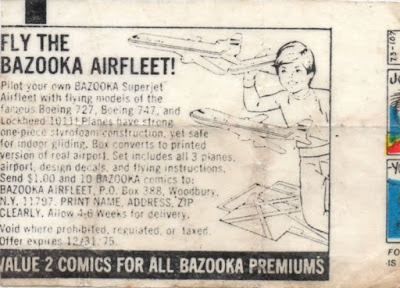 That envelope is really fantastic, with the image making it seem that this letter is an urgent priority. Thanks for sharing that.