Last October I took a look at Sam Rosen, who was Woody Galman's Stepfather and ran the concern that Woody turned into the Card Collectors Company in 1959.  I've been deep-diving Woody of late and found a few more tidbits on Rosen I thought I'd share. This was triggered by finding another matchcover featuring Sam from a 1951 convention (the previous post had a '49), at which point I thought had a pretty good post teed up.  Then a whole bunch more of these turned up all at once and I was able to piece together a much richer (and more colorful) story.

We get a prismatic and geomterically diverse set of five for the Rathkamp Matchcover Society's (RMS) 1948 do in Cleveland: 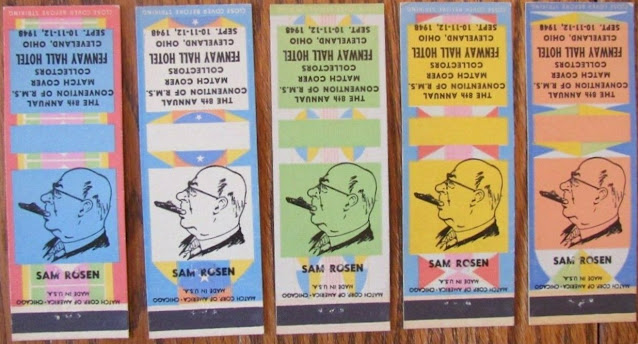 I've shown the '49 cover previously but WTH here it is again; it coincided with Sam being named the RMS Outstanding Collector of the Year, which resulted in a commemorative plaque and a bestowment of 500 matchcovers: 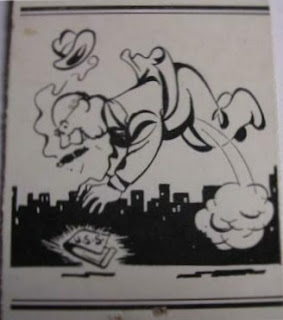 So the question is, can you find multiple colors in every year Sam had these made up?  Based upon the array from 1950, I am going with "yes, yes you can": 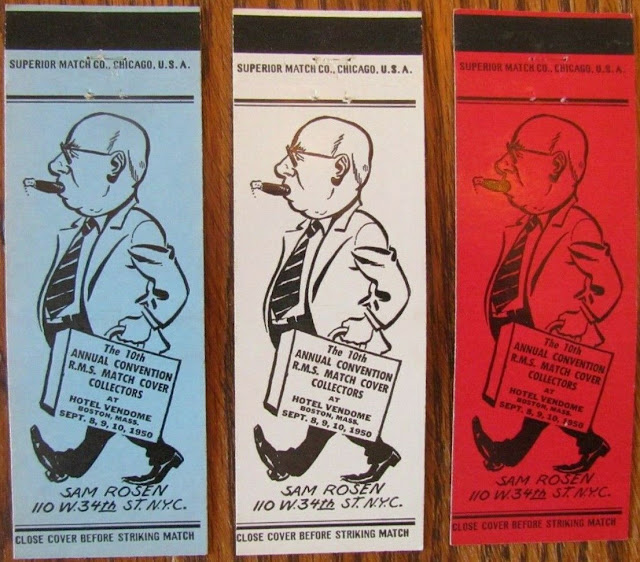 You have to hand it to Mr. Rosen, he did not spare any expense!  I'm still thinking Solomon & Gelman created the artwork for these but they do not seem to be in either Ben or Woody's hand.  1951 brings up another question, namely if there are color sets for every year, are they all complete at a count of five? Check it out: 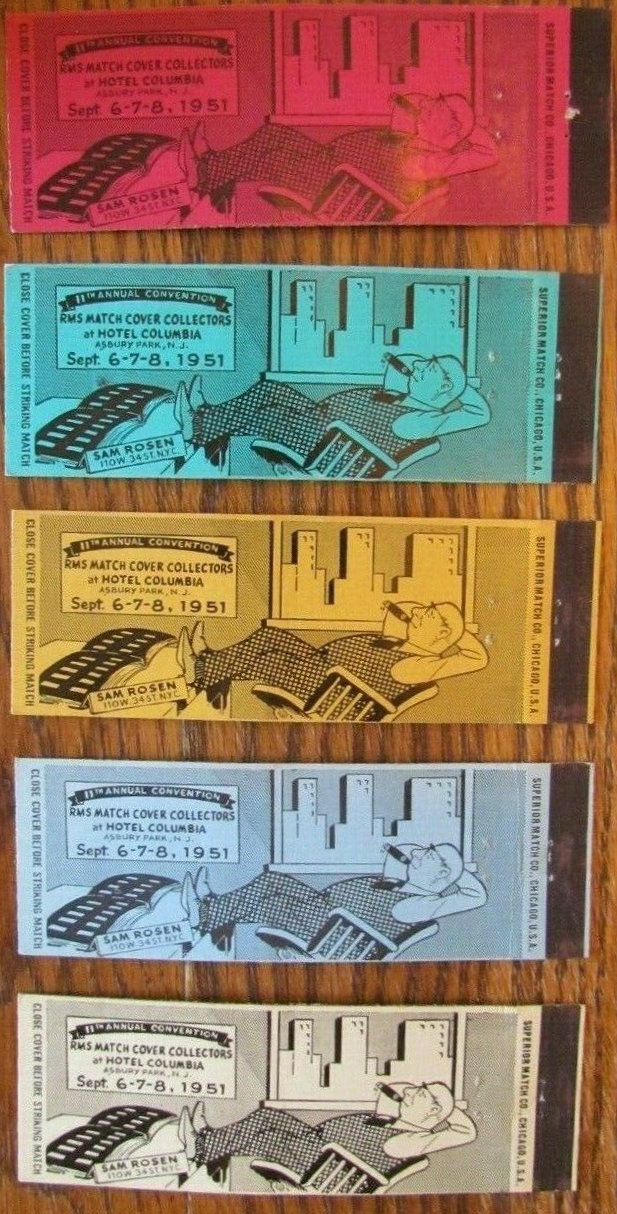 I believe by 1953 he was rolling with the after-market card business following his retirement from the garment business and he passed in 1958, so there's a fairly short post-war window of years where matchcovers of Sam could have been created. You could turn that 1951 image, featuring an album, into one for the hobby dealer known as "Sam Rosen" quite easily!
Speaking of 1952, we're not quite done.  This disappearing and repeating type of "infinity" illustration was quite in vogue at the time on the covers of comic books, which makes me think an artist from that field came up with this one: 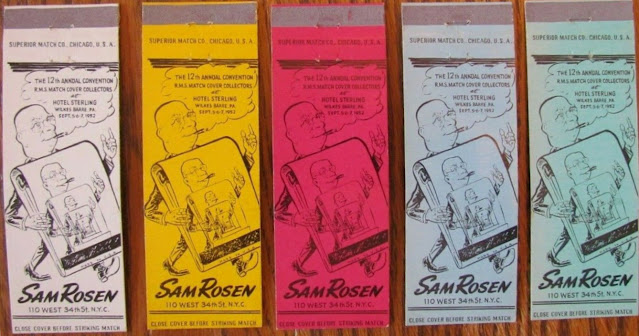 1953 is presently our end marker and I have only a single example to present.  It's outside the color palette seen previously but I'll bet more exist (four, natch, at a guess). Note the address changed from 110 West 34th St. in Manhattan to #233, which is right across the street from the present day Madison Square Garden.  Since the card business was located at #110 I'm not sure why this change of address occurred. Also, I am reminded of the Topps Funny Foldee issues given Sam's visage here:

The back of the dome on the reverse is a nice touch!

What's amazing, beyond the fact these even exist, is that Rosen became a world class collector in eight short years and that was after starting from scratch!  Check out this blurb from a 2005 RMS Bulletin (in the "Hobby History" section): 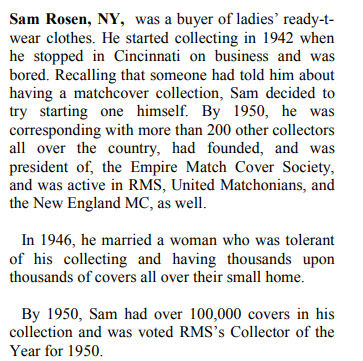 That "tolerant' woman he married was Woody's mom.  She must have been used to it by then! I have to wonder if he had covers made up for events in those other collector societies. 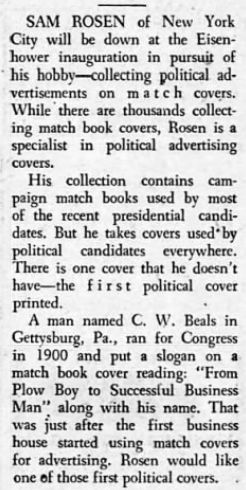 That was from what looks like a regular column in that paper, written by Otto R. Kyle, who as near as I can tell was a local Decatur historian of some national renown, so exactly where that little tidbit originated would probably make for an interesting story.

The May 24, 1956 issue of the Madera (California) Tribune ran what must have been a syndicated article about presidential matchcover collectors which noted: "Sam Rosen of New York claims the title of holding the largest number of political match books.  His presidential series runs back to William Howard Taft."

You can see how Rosen's hobby could have led Woody to think he would be a good choice to sell off extra Topps cards (and eventually those of other manufacturers) as a way to keep Sam active in retirement.

For the record, the RMS annual conventions started in 1939 and with Rosen entering the hobby in 1942, he could possibly have attended 1942's (Wilkes-Barre, PA) but I doubt he would have had matchcovers made up during the war. 1943 and 1945 saw no conventions held and sandwiched in between was one in Asbury Park, NJ.  That same shoreside resort town got the nod in 1946 and '47, so it's possible by then Rosen was doing his thing.  As you can see above, it moved around after that and with Sam dying at the very end of 1958, it's possible the following conventions got the matchcover treatment as well:

It's quite possible 1953 was the last year Sam worked in the garment business and stopped with the matchbooks.  Of course, excepting perhaps that very year, his Woody-inspired card company was run out of the same location as his garment business so who knows?

2020 saw a pandemic cancellation but the RMS has been holding a convention every year since 1946 and a handful have been thrown north of the border. 1965's was even held in London, Ontario, home of O-Pee-Chee! If Sam made up covers for other societies' gatherings it would not be surprising but the RMS annual affair was clearly the "National" for matchcover collectors and fertile ground for a splashy promo.

There are tons of RMS covers floating around, but those are older than most you see these days. I love the illustration of Rosen on the '49 cover.

Aren't they great? I happily manaaged to snag all of 'em on eBay, just await their arrival!