Here's a peek at the Topps Art Department's responsibilities circa 1977-78 that shows just how much detail went into some of the artwork used on their display boxes. The box in question housed 1978 Baseball wax packs and you probably know it on sight: 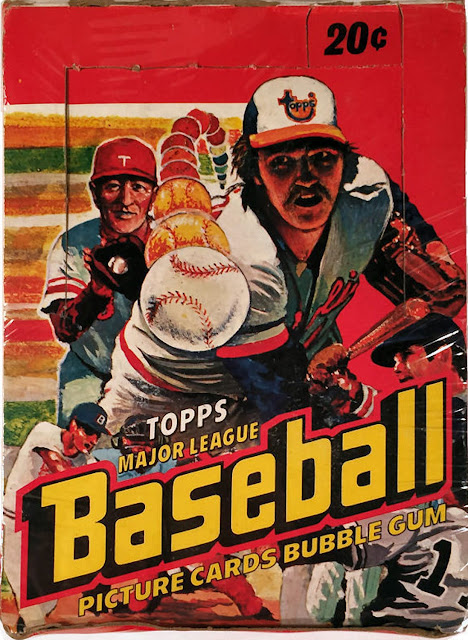 Topps was masterful at deploying images on their display pieces that almost looked like actual players. Yes, I'm looking at you "Barely Bench", "Maybe Martinez" and "Counterfeit Carl"! (NOTE: 5/11/21: The "Barely Bench" mug belongs to Joel Shorin, per an anonymous comment just received, and I have to say it's pretty darn obvious now that I look at it again!)
The side panel was a little more generic but that batter has no clue how to lay down a bunt:

What looked like a laydown by Topps though, was actually anything but. Check out this proof of that side panel art sold via REA a while back: 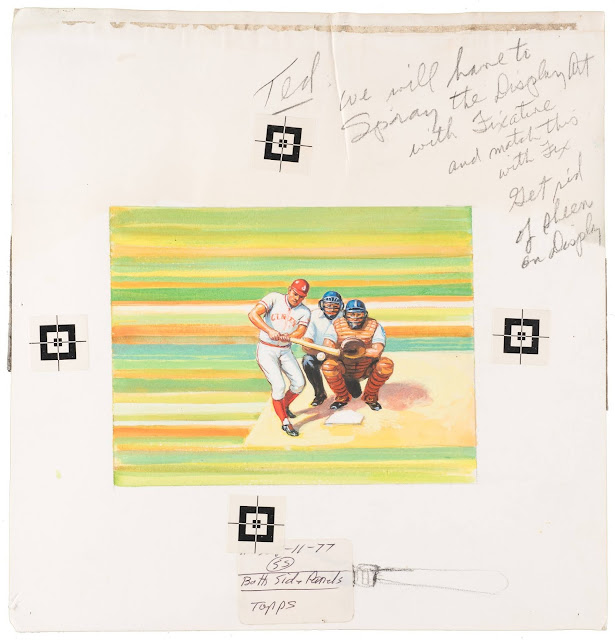 "Ted" is Ted Moskowitz, the assistant art director under Ben Solomon and that is his boss's handwriting indicating "fixative" will be needed.  Fixative spray adds a protective layer to paints and inks and it looks like the rest of the box art was essentially done at this point but an annoying sheen was still present.

The height of the original was greatly reduced in the final version above but there was certainly latitude in how much could be excised given the background striping. I'm not sure why the targets are cockeyed but imagine they've moved over the years.  The art looks like it's about ten years older than the issue date, especially compared to the box top art which certainly looks more modernized.  This almost looks like a piece created for internal mockups that eventually found its way to display boxes.

Ben Solomon essentially had his own ecosystem at Topps in terms of the art mechanicals and worked in conjunction with New Product Development (NPD) under Woody Gelman and Len Brown.  Their influence on the company's visual imprints informed about five decades worth of Topps products.

EDIT 3/28/21: A tip o'the baseball cap to Mark R. Pekrul for info on the Rivers-Morgan photo Topps hijacked for the bottom right corner of the box top and split out Joe Morgan to the upper left, making him look like a very ill Johnny Bench. Voila: 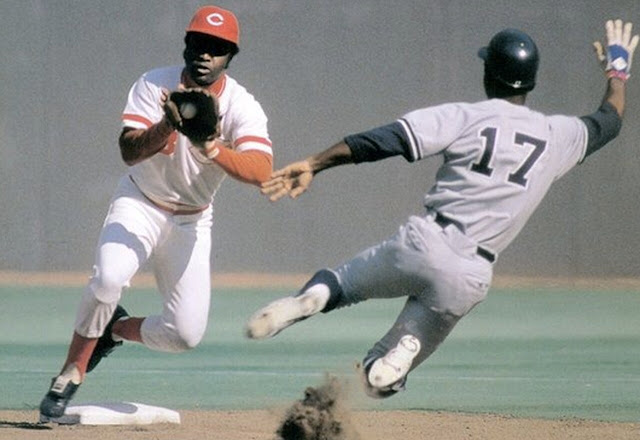 I have one of these empty beauties looking at me right now from my shelf - 1978 was my first year collecting cards. As to the image on the top lid, I knew something looked familiar and now I know what it is - take the fielder from over the pitchers right shoulder and pair him up up with the base runner in Yankee grays at the bottom right and you'll have Walter Iooss' famous pic of Mickey Rivers sliding into second against Joe Morgan from the '76 Series...I'd upload the pic but don't seem to be able to attach an image. Just Google "Joe Morgan Mickey Rivers". Thanks for this!