In support of my recent efforts to move past 1980 as my cutoff point for this blog, mainly due to a rekindled inerest in the weirder and tougher Topps baseball issues of the Post-Glut/Pre-Eisner eras, todays' post will examine an old concept made new by Topps in the late eighties.

In 1955 Topps issued a fairly famous set of cards called Double Header.  I'll not delve into them again today (for that, click back) as they are quite well known and documented in the hobby.  They essentially were inspired by a set of tobacco cards referred to as Mecca Double Folders that were issued in 1911.  I have no doubt Woody Gelman used that aboriginal set as an inspiration in designing the 1955 issue but I cannot attest as to who semi-revisited the idea 33 years later at Topps, although it could have been Len Brown I guess.  There was a twist though, as the modern sets used the idea of pairing a miniature version of a players rookie card with a mini version of their regular issue current year card in a stand up plastic frame. They also added an "s' to make ii Doubleheaders (I'll leave it up to you to determine if the 55's are two words and/or the latter version is one).

The holders measure  2 1/2" tall by 1 15/16" wide at their base (which is a little wider than the portion holding the paper "card") which also has a depth of 5/8" as it flares out from the top.  The double sided paper inserts measure out at 1 1/16" x 2 1/4" and I guess you could liberate them if you wanted to crack 'em out, or more properly slide them out the top of the holder. The most well known versions of these were issued in 1989 and 1990 but there's a test issue from 1988 that not everybody is familiar with.

In addition to the 24 player set referred to as All Stars, a similarly sized set of  Mets and Yankees was issued in 1989. They must have sold well as a 72 player release followed in 1990. But there was a test issue in 1988 that involved a set of 8 Mets and Yankees (4 from each team) and paired the rookie card with one from that year.

Here's the Mets subset, front and back, with Carter being a ginned-up image, his original being on a four player Rookie Stars card: 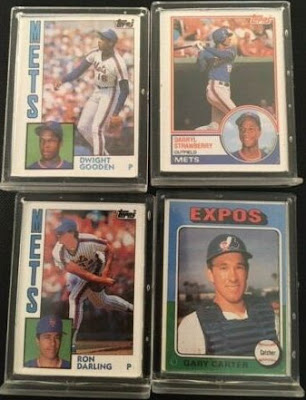 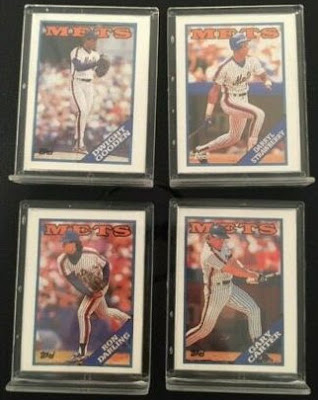 The test pack was a small and fairly attractive paper envelope.... 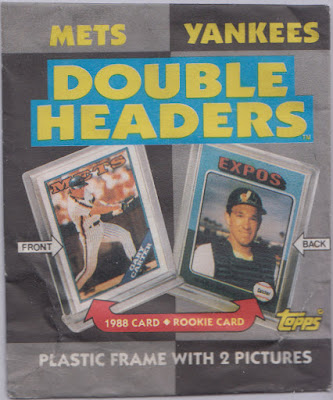 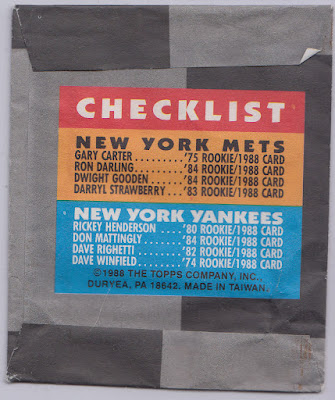 ...except when it wasn't.  Check out this scan of the full test set over at my buddy Jeff's teamsets4u website:

You can clearly (*groan*) see it's the same set and checklist.  I suspect Topps wanted to see if one wrapper outsold the other (not an uncommon move for Topps tests of the 70's and 80's) but that's pretty neat. They ended up going with the paper wrappers for 1989 and '90.
Here's a liberated Mike Greenwell from the 1989 set: 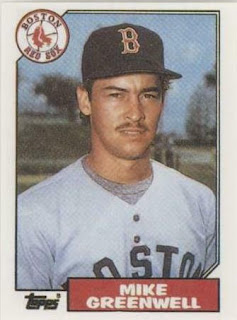 One little diff-no wood grain border on the '87!  The current 1989 reverse looks OK though: 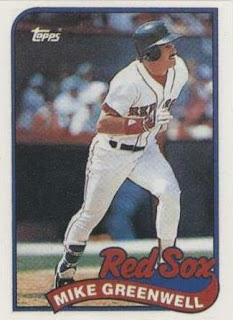 I can't see they did much to any of the other rookie cards in '89 and when 1990 rolled around, the wood was once again good: 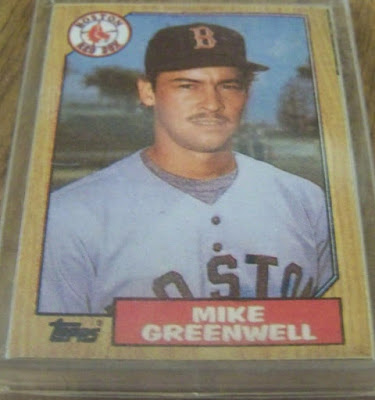 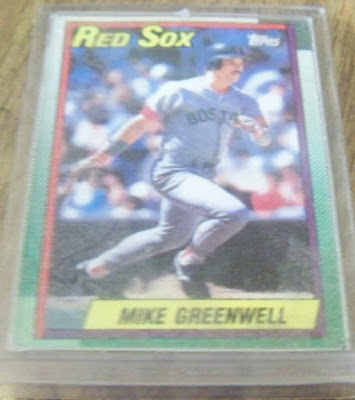 Beats me why the 1989 issued Greenie rookie side went astray.
The '89 Mets/Yankees set is the same size as the All Stars issue but the Noow Yawkers had their own checklist wrapper: 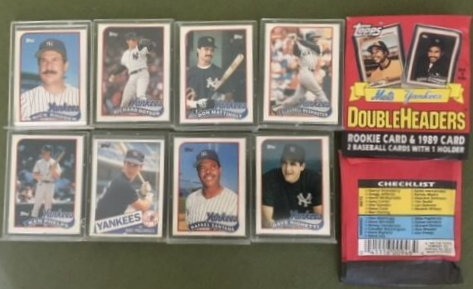 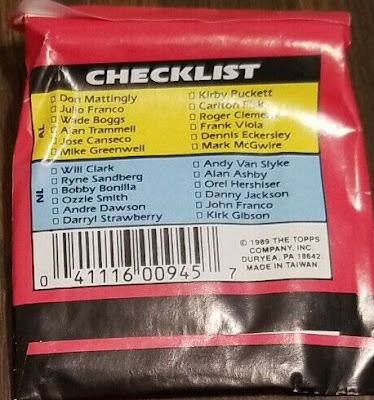 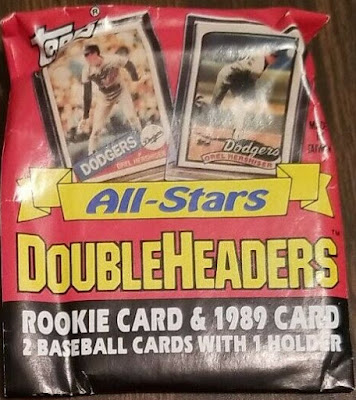 As you can imagine, with a really weird and pointy frame, the packs suffer greatly.

In 1990, with 72 subjects it took three pack backs to detail the full checklist, here's one of them: 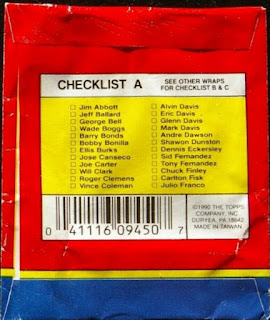 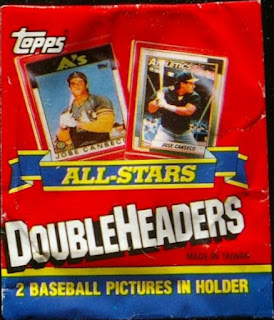 The All Star issues from 1989 and 1990 set are extremely easy to find and boxes can be bought very cheaply.  The 1989 Mets/Yankees is tougher and the 1988 tests are even more difficult and it also seems to me that the Yankees are the tougher of the two 1988 NY teams but that's hard to gauge since:

b) not too many of these are around.

The Mets/Yankees set must have tested well in 1988 -- indeed, the Mets were incandescent at the time compared to the Yankees if you lived in the NYC metro area -- but the 1989 "home team" returns must have disabused Topps of three-peating the feat in '90. Like a few other Topps oddities of the time, three seasons saw a release and then Topps moved on to something else.

Never have seen these before. I guess it would mark the second time ever that Topps started to reprint its past card. The first time was the 1952 Topps reprint set (not counting the 1974 Topps Hank AAron special, 1975 Topps MVP Etc...)

It was a huge gamble five years earlier with the 1952 Baseball Reprint and I think your observation is mostly correct but it's messy. Those Win-A-Card games notwothstanding or that weird Fun Packs hybrid issue around that time (1968-69) as well, 1967 Who Am I? "almost" reprinted the Babe Ruth card from Look' N' See, along with several other subjects (slight design change on front). In fact Ruth and some of those other subjects were also reprinted in that Fun Packs set so those might be first from Who Am I? to Fun Packs and Ruth the first Baseball subject overall. Target Moon and Hot Rods also got the treatement, with the latter being a third timer as well (came with both Win A Card and Fun Packs). And the original Tatoo issue had many designs they used 4 or 5 more times as the years progressed.

I'd have to think about more Non-Sports and if tattoos and those others don't count (we get to all make up our own rules!) I think the 1972 U.S. Presidents set would be the earliest example of this. Yes, I am being pedantic to the extreme!

Fellow Mets fan here-- love the site and have learned so much here over the years.

You note that "the two 1989 issues and the 1990 set are extremely easy to find and boxes can be bought very cheaply"-- however, I believe conventional wisdom is that the 1989 Mets/Yankees is actually a bit hard to find. (I have a well-worn partial box that hasn't aged well-- a tumble from a closet shelf a few years ago led to many scratched and cracked little holders.)

Thank you sliced tongue, I missed that and have amended. Glad you are anjoying my posts!