The Dating Game Is Afoot!

The precise dating of Topps sets and those of other issuers is, to my increasingly cluttered mind, primarily a vestige of baseball card collecting, where determining the year of a player's rookie card appeared has a massive impact on value.  Sports are, of course, determined by their seasons and for the most part an issue date for a specific set from the last 75 years can be ciphered quite easily. Peek back earlier than World War 2 though and it's not always so simple, even for baseball and football sets.  As for non-sports, for certain sets it's difficult to figure out exact issue dates well into the 1960's and even into the 70's on occasion.  Compounding things is the propensity of Topps to sell hot sets over more than a one year period or something they issued across the "New Year's Divide".

Popeye Tattoo and its two (or four-stay with me) subsquent offspring is a perfect example of both effects. The original tattoo series has been described as being issued anywhere from 1956 to 1958, with the latter date seemingly the consensus. Here is the original series wrapper:

It's not dated of course, just the King Features Syndicate and Topps copyright lines appear. However, I'm pretty sure it was a 1957 issue that was sold well into 1958.  Take a look at the box, or rather two pieces of it-rather stunning I'd say when the top graphic is blown up-but sadly the only display remnants I can find: 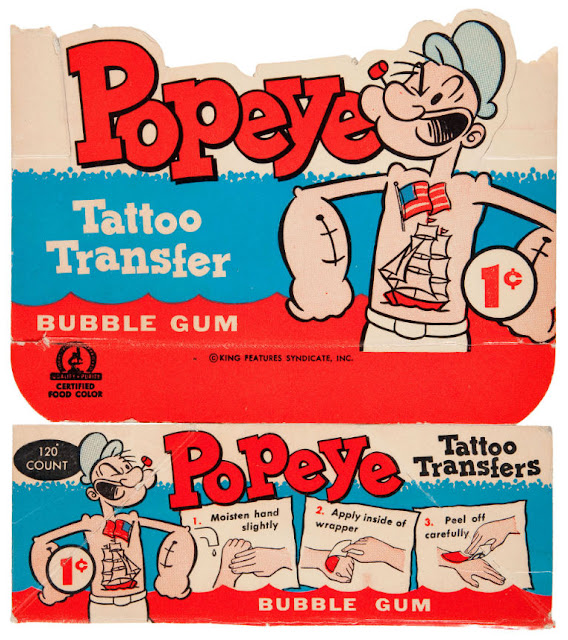 Not exactly a ton of information, although there is a solid clue. I've dug around a little and found that the Quality & Purity logo, which was featured by Topps going back to the 1940's, shows up on both the Isolation Booth ('57) and 1957 Football display boxes. I can't track it into 1958 anywhere, even on the boxes that still have the old "Atom" Bazooka penny tab wraps shown on the back panel issued in the first half of that year. So the Q&P logo appears to have been ditched by late 1957.
Could it have been issued in 1956?  Well, George W. Woolery compiled three volumes about Children's TV back in the 1980's and these books are immensely useful in determining premiere dates, series air date spans and the like. Per Woolery, Popeye premiered in syndication on September 10, 1956 in the New York City and Chicago metro areas and within a month was on the air in LA. He describes the show as a "smash hit" and it certainly was but no one in the fall of '56 really knew at the time how it would play out.  This was, after all, the first theatrical-cartoons-to-TV syndication package ot its kind when the deal was cut between the syndicator and Paramount Pictures (which owned Famous at the time).
The original cartoons in the syndication package were early, black and white ones but color TV was already available and had been since late 1953 (did you know Dragnet was the first show shot in color?), although the sets were quite expensive early on, with small screens and heavy cabinetry abounding.  It wasn't until a year later that the color Popeye cartoons, which kicked off theatrically in the middle of World War 2, were negotiated into the syndication deal cut by Paramount.  As documented here on numerous occasions, Famous and it's predecessor Fleischer Studios employed Ben Solomon and Woody Gelman for several years and the connection should not be lost on people when it came time for Topps to issue their first licensed character tattoo set. Big cities generally sold expensive electronic products first and New York, LA and Chicago perfectly fit that bill with the color shorts becoming available.

By 1960 Popeye was airing on 150 stations nationally and described as the most popular syndicated cartoon show in the country. Topps was on it before that though and I've already detailed a jobber's invoice from March of 1960 covering the "New Series" of Popeye Tattoos. 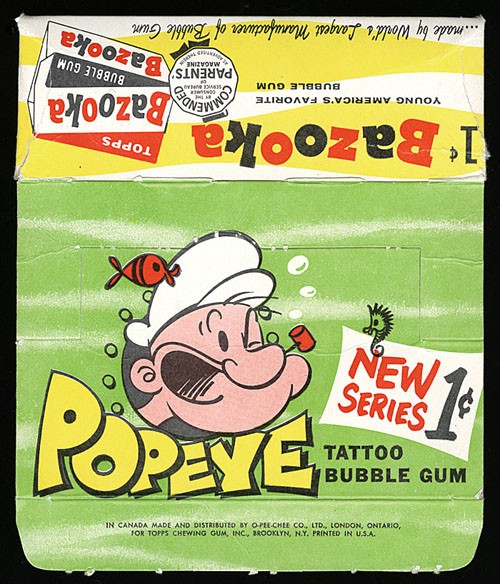 Between that and the American Card Catalog, where Gelman was an editor, giving 1959 as the year of issue, I think it's safe to say these indeed debuted that year. This all suggests a 1957-58 window for the original series and 1959-60 for the second.

Now we come to Popeye's Mystery Color Tattoos. Rights to the theatrical cartoons were controlled by Paramount but don't forget that Popeye was first a comic strip, where the rights were owned by King Features Syndicate. KFS commissioned 220 new shorts, made just for TV, to debut in the 1961-62 season. Popeye was still a hot, hot property and Topps of course wanted to remain onboard while perhaps freshening up their product a little:

I like how Topps subbed in a fish on the wrapper application graphic! That fish appears on the underside of my example, whcih I think was a salesman or promo verison as there's no production rip at the top:

Again, no date is found on the wrapper but the Third American Card Catalog Update, compiled by Buck Barker, appears in the February 1, 1962 issue of the Card Collectors Bulletin and clearly identified the mystery tats as being a 1961 issue, 13 lines down: 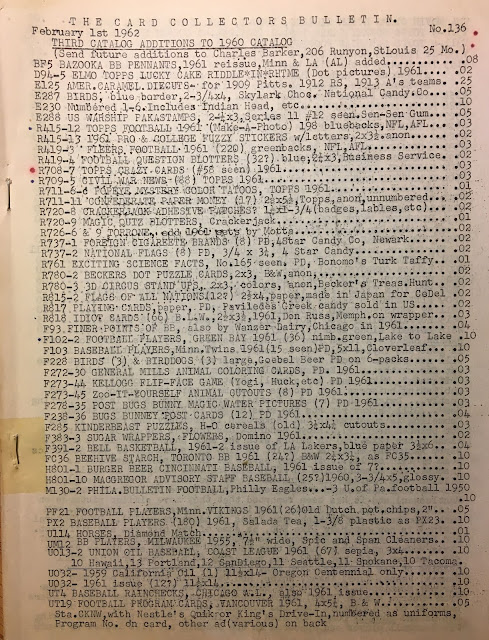 Given how the tatoo series would have been timed to the TV season, it seems logical this was a 1961-62 release.

Many thanks BTW to Friend o' the Archive David Kathman for providing definitive dating of this ACC update, which was inexplicably described as undated in Chris Benjamin's compilation pamphlet. There's another great tidbit on the page as well, namely confirmation that Civil War News (see line 14) was indeed issued in time to commemorate the 100th anniversary of the start of hostilities between the North and the South in 1861. Every source I've seen describes it as a 1962 release but clearly it was not if Barker had it pegged as a 1961 issue.

I did mention four additonal Popeye tattoo series, didn't I?  Having covered a duo, that leaves two still. Well here is one from Venezuela:

Finally, Popeye and Topps reunited in 1966 with this new/old wrapper:

It's very small and quite hard to read but the commodity code, which was still being developed in the wake of Topps moving all but their executive offices from Brooklyn to Duryea, PA in early 1966, ends in a 6, so it's a 1966 conception and an issue almost certainly designed for the 1966-67 television season.  This is a tough wrapper compared to the others, so maybe the gleam off the spinach can was fading for Topps by then.
Posted by toppcat at 8:00 AM