Are You Ready For Some Football Salesmen Samples?

I realize that Baseball Salesmen Samples get most of the attention whe it comes to such things but Topps issued these little teasers for most, it not all, of their standard card sets through 1967 or so and the 1963 and '64 Football samples below are one such example:

Pretty sweet, right?  The proportions on these "three-strips" always seem just right to me, probably due to some extension of the "golden ratio" or some similar type of aesthetically pleasing combination of length and width:
The reverse is quite wonderful:

That "special feature" may have been fun to rub off as a kid but it certainly bedevils modern day collectors!

Sometimes samples got cut up, probably by a wholesaler's or retailer's kid: 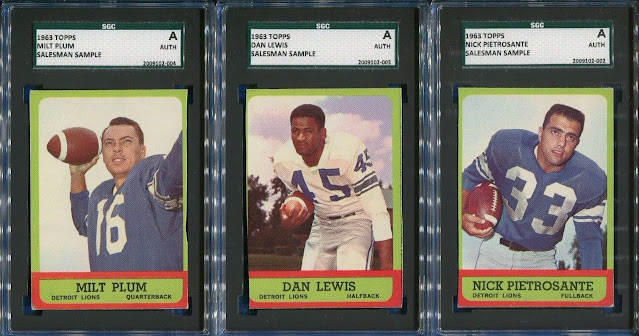 Still nice but I really prefer my strips unsullied.
1964 brought this; I have to say I'm not a fan of this design as I want to cut along the stars, which resemble dotted lines to me:

1964 was an AFL only affair for Topps, a big leap of faitth in a way but I'm betting the contractual rights were cheap.  I like the back better than the front:

Too bad these ended prior to 1969-the first series Football cards from that season would have looked stupendous given their full bleed borders-this uncut sheet certainly gives you an idea though: 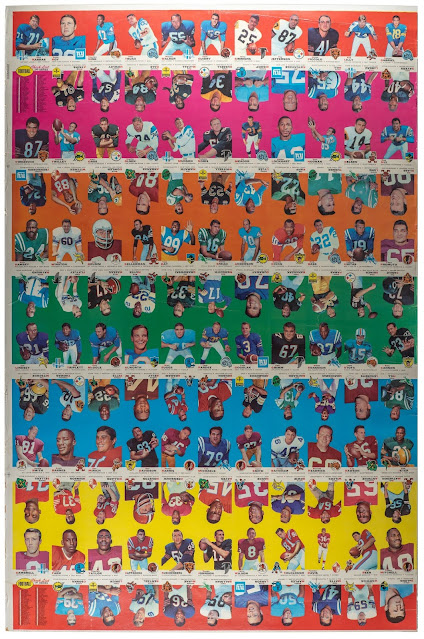 It still pains me that Topps added white borders to the second series and it seems like a real head-scratcher. Ah well.......

Even though it appears the 1969 1st series cards do not have borders, closer inspection shows that there ARE borders, the same color as the background. (Notice the players
jerseys do not extend to the card edges.)

Adding the borders to series 2 football, is one of the greatest sport cards mysteries of all time. I could only speculate it could have had something to do with the NFL logo license but I could not make any logical leap to make a connection.

Wait a minute, there's a purple variation mixed with two regular sky cards on that 1963 sample?

It would appear so.

That might throw a spanner in the works of some theories!