Last week's post about standard sized Topps sets that might have been designed with their Giant Size issues in mind has led me to the 1957 Planes set.  Seemingly unremarkable, this 120 card aviation themed issue continued a commitment by Topps to feature airplanes and other flying craft in wide-ranging sets.  They did it in all different sizes too: with Wings in 1952 (Giant Size), a Hocus Focus subset in 1955 (in two sizes, no less: OG gum tab and one never-seen-again size issued in panel form inside nickel packs at 1" x 1 9/16") before coming out with the 240 card Jets set (a "tweener"the same size as Scoop and Look 'N See) in 1956.  Jets was designed using real black and white photos --almost a Topps first barring the 1954 Baseball inset photos--that could be saved in collector albums themed to the set.

So it's unclear to me why Topps went with an illustrated set just a year after Jets had apparently sold through the roof. Perhaps they were held back, or maybe using real photos proved too costly; possibly they just didn't want another B&W avaition set but it's kind of a head-scratcher. 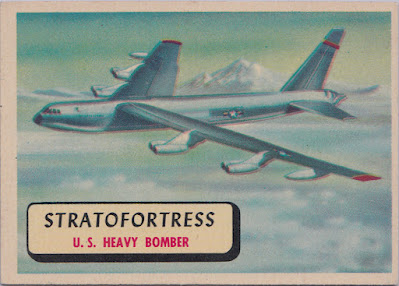 I daresay the reverse somewhat resembles that of Wings from a half-decade earlier. Here's Planes: 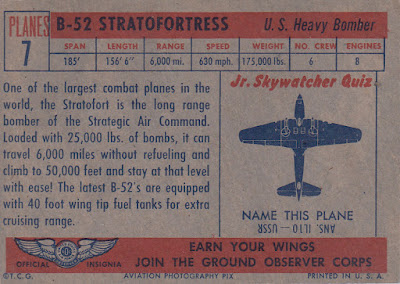 I spot checked that Aviation Photography Pix indicia and it's only on certain cards. More on that in a sec but first, here's a Wings reverse: 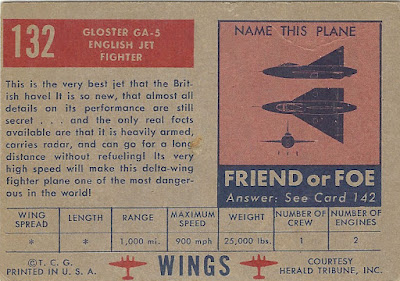 However, there is a twist as Planes was also issued with Blue Backs! 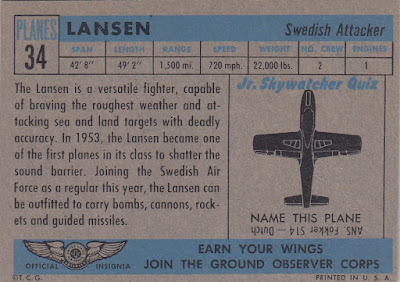 If you are keeping score, the 1951 Baseball Candy Red and Blue Backs and the 1953-54 World On Wheels set can also be found with similar red and blue reverses, although the Blue Backs are a different subset than the Red Backs in Baseball Candy. Unlike World On Wheels, the Planes blue does not match up with that of the 1955 All American set's reverse inking (another Topps mega-mystery).  And that Aviation Photogaphy Pix indicia does not only appear on one color or the other but it definitely was sporadic. I'm not sure why other than Topps possibly ripped off the other images from various Jane's books on aviation like they did with Wings (hat tip to Pete L'uhosch and John Stupek and a few other folks for that little bit of info).
The story on Planes is that it was printed in two 60 card series and that cards 9 and 65 were arrayed on the "wrong" sheets.  This was a common ploy Topps used for early sets with an issued checklist, which were still a novelty in 1957 and just like what they pulled with Jets (inside back cover of the album held the list) a year earlier to keep kids looking for a "hole" that didn't yet exist.  Todd Riley, who knows as much about such things as anybody, believes #9, which is considered to be a "scarce" card, is only as scarce as other cards from the second series 2.
Here is the Planes checklist card, which was "pushed" into the packs as it was printed separately, as was the Topps method at the time. You can tell as the card stock isn't gray like the issued set it chronicles. 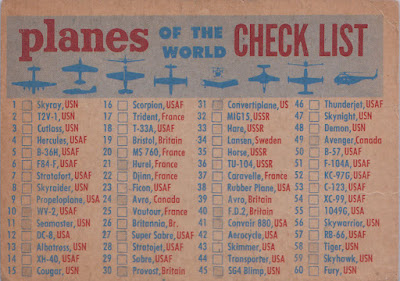 Here's one of the two checklist backs: 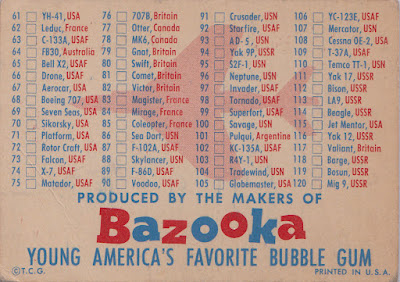 As they were also wont to do at the time, a Big Blony checklist back also exists: 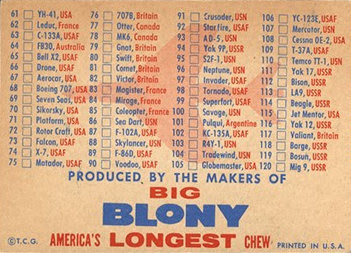 There's no value difference on the checklists but red backed Planes cards are 2-3 times tougher than the blues. No one knows why both colors were used, although some speculation among hobbyists back in the day intimated Topps was testing Bowman's printing facilities with one of the colors.  I highly doubt that but it must have been intentional if the set was indeed issued in two series, as all cards from 1-120 can be found with either color.
In 1963 Topps licensed the second series to Stani of Argentina, a long running South American business partner for a set dubbed Aviones.  Stani cards are renumbered from 1-60 but follow the exact order of the second series of Planes, with one notable exception as #65 is not in sequence as #5 in the set but it is replaced by...#9!
Check out a Stani reverse: 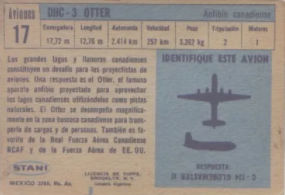 The blue on the Stani card above is washed out due to the scan, it's a little darker than it shows but not as dark as the US blue. Note that, in additon to the differences in language, some other subtle differences also crop up: 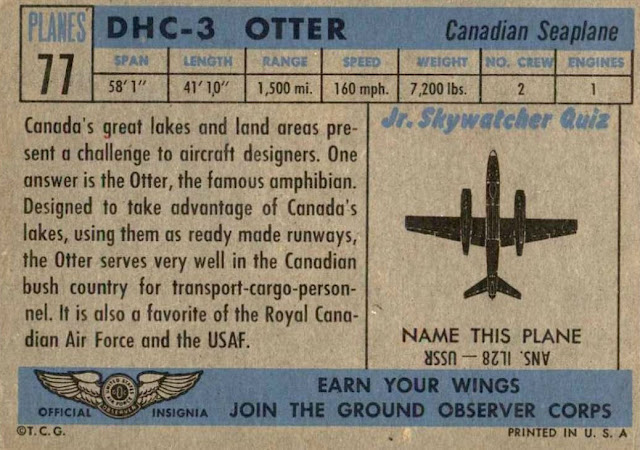 I don't believe a checklist card was issued with the Stani set, nor were any red backs. The Stani cards may also have been retailed in Mexico.
Posted by toppcat at 8:00 AM

1957 Planes is the coolest set I never heard of before. I think AG may have had a subset like this. Love the stats on the back. If I was a kid in 1957, I would have been collecting these.