1957 was the first year since 1951 where Topps didn't issue any cards in their formerly ubiquitous "Giant Size" format of 2 5/8" x 3 3/4".  Instead, "Standard Size" cards measuring the still-familiar-to-this-day 2 1/2" x 3 1/2".  However, it seems this decision to shrink the card size by a smidge over 11%--and the corresponding increase from a 110 card half sheet (arrayed 11 rows x 10 columns if measured the long way top to bottom) to one with 132 impressions (arrayed 12 rows x 11 columns measured in the same manner)--resulted in 11 being the eventual "divisor" for many sets, variations and short prints.  It took Topps a little while though to sort this out and while they were operating in an 11 column environment after the switch, it seems they were still often designing sets in a 10 column framework some time into 1957.

Elvis Presley was, of course, the first standard sized set and it managed to clock in at 66 cards, neatly fitting into the new order.  Considering every card set Topps issued in 1957 was standard sized, it's odd that they managed to issue four that were still designed in "base 10" after Elvis hit the streets.  These were:

Planes (two series, in theory, of 60 cards each)

So what happened?  Well for the Goofy Series Postcards and Planes sets, since both used illustrations and not photographs, the design and numbering had likely been locked in place prior to Elvis Presley being issued.  But what of Robin Hood and the Basketball sets? Well as it turns out, the NBA had eight teams in place for the 1957 season and each could sport a ten man roster.  If you look at the distribution of players in the set, each team gets 10! So that one is no mystery.

Now Robin Hood was not limited by roster size but it may have been impacted by Maid Marian being played by a new actress for its final two seasons (and which I note, was a British TV show that was rebroadcast in the US).  Bernadette O'Farrell bowed out of the role and Patricia Driscoll then took over until the series concluded.  Check out this card, #37 in the set: 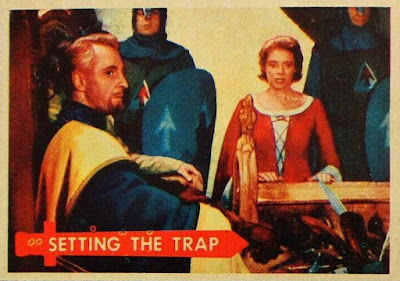 I believe that is Ms. O'Farrell... 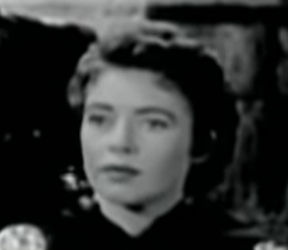 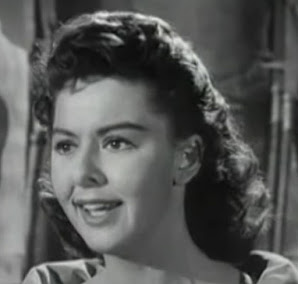 Here's the gist, then. A lot of Topps TV-themed sets were understandably tuned to the normal September start of the annual season but I don't necessarily think this one was.  Given the show was an already established import and the new Maid Marian would have debuted in September of 1957 in the US, the set could have been released while the 1956-57 season was being broadcast with O'Farrell still in the role and Topps still dividing by ten.  Could this have impacted the set total?  Possibly, but we will never know.

We can't even look to 1958 for help.  The reissue of Space Cards as Target: Moon was 88 cards, as was the Zorro set while T.V. Westerns, a bizarre mish-mash of shows and stars, totaled a clearly truncated and extremely odd 71 subjects, likely impacted by threats of lawsuits or the inability of Topps to secure certain rights.  There was no Basketball set in '59 and the three other major sports all were firmly in step with a "base 11" setup so that was that.

With Topps, always expect the unexpected, even if expected! Speaking of which, stay tuned for next week's look at Planes...