This week's entry in the 1952 Bowman Phantom biographies is not a player but rather a coach. Yes, Bowman included a handful of managers and coaches in the set, as they had in 1951 but by no means did all 16 teams get their field staff represented on a card.  Four coaches and three managers made the cut and Lavagetto would have upped the coach count to five but his appearance in the 1952 Topps high numbers (#365) looks like it precluded that.

I'll dispense with the reproductions from BHN now and henceforth, so here is Cookie in all his 1952 glory, as reproduced thirty years later: As noted on the reverse, he broke up Bill Beven's no hit bid in the 1947 World Series with a pinch hit double that plated two and won game four but the Dodgers ended up losing to the Yankees in seven, the second installment of a World Series skid against the Bombers that would reach five Fall Classic losses before they finally prevailed in 1955. If not for Cookie's smash, it would have been one of the ugliest no hitters in baseball history, although that would have been overshadowed by it being the first ever in the postseason.  Bevens walked 10 Dodgers but obviously had massive movement on his pitches. He did give up a run prior to Lavagetto's double, so it would not even have been a "no hit, no run game" but I am being pedantic. 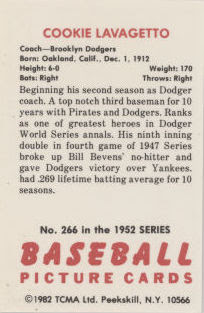 He sure seems like he enjoyed having his picture taken: 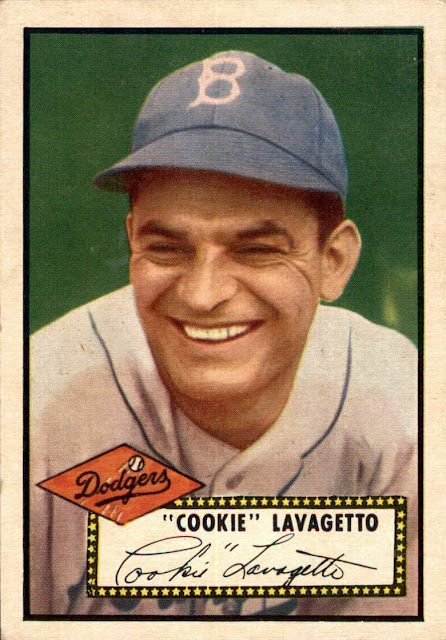 Cookie was originally named Enrico, then when a teacher told him that translated to Henry or Harry, Lavagetto liked the Anglicized version so much eventually had it legally changed to the latter.  The son of an Oakland trash hauler, he got a seemingly late start in pro ball when he signed with the Oakland Oaks of the PCL in 1933 after a disastrous tryout with the San Francisco Seals was redeemed by a big pinch hit (hmmm....) off former big leaguer Pudgy Gould in an ad hoc charity game of semi-pros and professionals.  He ended up having an excellent season and was known as the protege of "Cookie" DiVencenzi, the owner of the Oaks after he signed, shaving a couple of years off his age in the process.  The sobriquet "Cookie's Boy" got shortened to plain old "Cookie" pretty quickly.

The Pirates picked him up for cash and a player to be named later in mid-September but remained with the Oaks until the 1933 PCL season wound down in early October. The Bucs were probably surprised to learn he had shaved not two but three years off his age; before that got revealed during spring training, some thought he was still a teenager. Primarily a Second Baseman who played a little Third, he got off to a quick start with Pittsburgh in 1934 then faded by midseason after an early June illness spelled him for a week.  He was a part-time player for the rest of the season and his final two years in Pittsburgh but was shifting to full time play at Third as Pie Traynor seemingly lost it overnight at the end of the 1935 season.

The Dodgers picked him up after the 1936 season in a trade that involved a couple other players, neither of whom distinguished himself for his new team.  The pungent Brooklyn air proved to be exactly what Cookie needed.  Moving back to Second, Lavagetto had a solid 1937 season for the Bums and then, after shifting to Third again in '38 made four straight All Star teams. Along the way he picked up his pilot's license, much to the displeasure of the Dodger's brass and skipper Leo Durocher as well.

The Dodgers won the NL pennant in 1941 but for Cookie the next four years were spent in the Navy, where he enlisted and put his flying skills to use in service of his country as a aviation machinist's mate. He spent the war years in California, first in Alameda and then Oakland and played a lot of Navy baseball. He was transferred to Pearl Harbor just after war ended and managed a Navy team there that featured one Stanley Frank Musial.

After his discharge he returned to Brooklyn for two part-time seasons, having lost the balance of his prime years to World War 2.  The Dodgers released him after his World Series heroics but not until early May of 1948, suggesting a possible injury. He returned to the PCL for three more seasons, playing under Casey Stengel (it seems as part of an early platoon experiment) and Charlie Dressen, no doubt soaking up their wellspring of managerial wisdom. He returned to the Dodgers as a coach when Dressen was named manager in 1951 and quit when Chuck was bounced in favor of Walter Alston after the Dodgers lost the 1953 World Series. 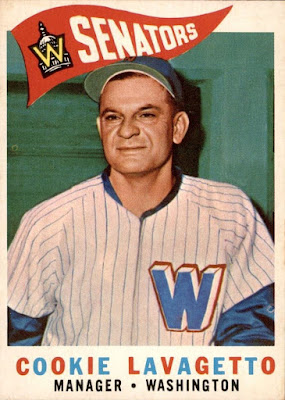 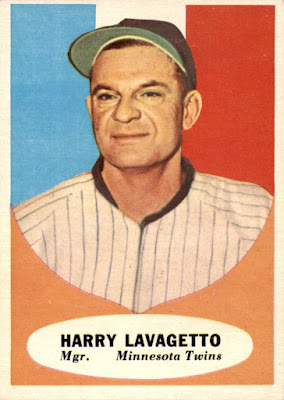 Twins owner Calvin Griffith then had Cookie take a sabbatical (possibly due to mental strain) in early June then fired him after another few weeks once he had returned.  Sam Mele managed the games Lavagetto didn't and there must be a good story there but I can't suss it out.

He was a Mets coach under Casey Stengel in 1962-63 and then headed back to the West Coast after a health scare in early 1964 and coached for the Giants until 1967 before retiring from the game.  He passed away in 1990.