Back the to 1952 Bowman Phantoms today campers, as we look at another obscure player in this set that never was, Jack Merson. Born in 1922 in Elkridge, Maryland, Merson would ultimately become an unlikely big league player even after being a stellar all around high school athlete, earning 15 varsity letters.  An infielder in the majors, he made a name for himself as a pitcher in high school but preferred playing the field. Showing  prowess in a semi-pro game in 1940 against a US Navy team (likely from nearby Bainbridge Naval Training Center) he was spotted by a Senators scout and signed with them.  He made it into 12 nondescript games with their Newport, Tennessee D-level club, hitting a paltry Ray Oyler-esque .135 to close out the season.  He wouldn't sniff another professional game until 1947, presumably being released after his low output debut.

Returning home he found a job in Elkridge, joined the local fire department and then enlisted in the U.S. Army in 1944. After completing basic training he was home on leave when he accidentally shot himself in the knee. He recovered from that and after his 1945 Army discharge found himself in semi-pro ball again for 1946 at the age of 24, although he shaved two years off and was thought of as a 22 year old.

The Pirates liked what they saw and signed him; he debuted with their Class C Uniontown, Pennsylvania Middle Atlantic League team for 1947, playing Second and knocking the cover off the ball to the tune of .388 for the year. He remained in PA for the 1948 season, toiling for York in the Class B Interstate League and hitting a respectable .321 albeit with minimal power.

1949 saw him join New Orleans in the Southern Association but his average dipped 74 points and he may have suffered an injury that affected his swing. He was stellar in the field though and played some Third and Short as the Bucs tried to make him into a useful utility man. It seems to have worked as he was added to the Pirates 40 man roster in 1950 but he remained in New Orleans the entire year, getting his stroke back and hitting .290.

Triple A beckoned in 1951 and he spent most of the year with the Indianapolis squad in the American Association and quite puzzlingly, played only Second Base before being called up to Pittsburgh and debuting on September 14th.  He was 29 years old at the time but made the most of things by hitting a quite impressive .360 over 50 at bats.

The verbiage on the back of his 1982 TCMA card was sparse: 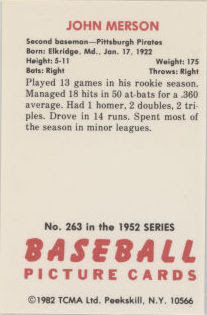 He made the 1952 Pirates as their starting Second Baseman, occasionally playing Third and he was on the ball early in the year but came back down to earth as the season wore on. He was hitting .246 when an errant pitch broke his right wrist in mid-August and was done for the year.  As you can imagine, this did not help his career but he was playing well enough (and more importantly was a warm body) to earn a spot with Topps, appearing in the high number "second series" that year, which must have spiked his Bowman card: 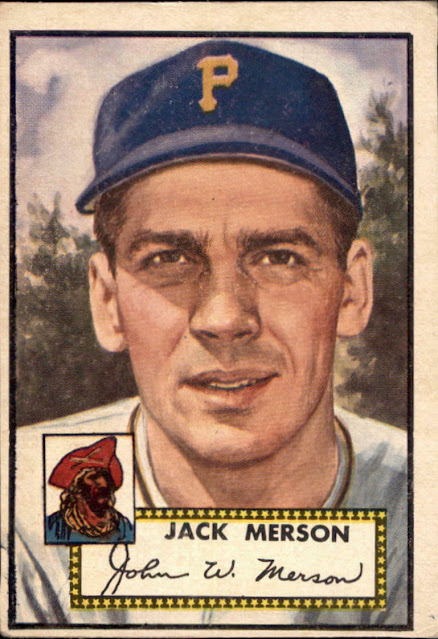 I swear, those trees and sky got the Bob Ross treatment and his even image looks painted to me, although likely over a B&W photo with some Flexichrome: 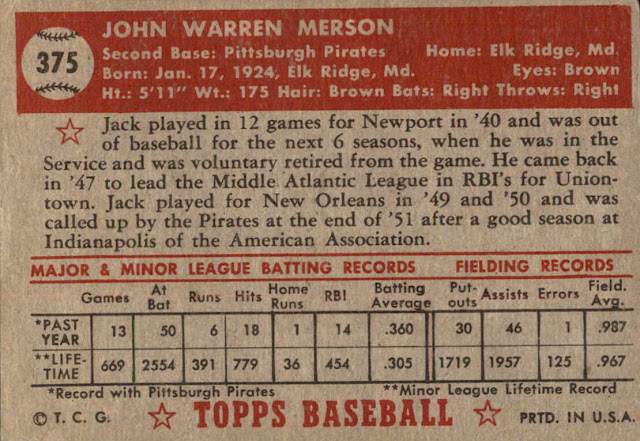 His fudged birthdate got by the Topps fact checkers, no surprise!
The Pirates traded him to the Hollywood Stars in the Pacific Coast League after the season but the PCL was subject to a major league draft and the Red Sox selected him. After playing exactly one game for Boston in 1953 he was optioned to back to the PCL, joining the San Diego Padres. He played there until he hung up his spikes after the 1956 season, earning a championship ring with their 1954 squad.
Merson returned to Elkridge thereafter and started up a couple of local businesses before becoming a prison guard. He died in his hometown in 2000.
With baseball back, I'll probably pause these profiles until the hot stove picks up again.
Posted by toppcat at 8:00 AM