I'm on a bit of a Bowman kick of late and it seems to be centered upon unissued items.  Of particular noteworthy item is what's described as a 1948 proof issue that was meant for a five or possibly ten cent piece of Blony bubble gum featuring a comic strip called Roger The Rookie Dodger. As near as I can tell, the first indication this set ever existed was when a sample proof wrapper popped up for the first time in a now thirty year old REA auction: 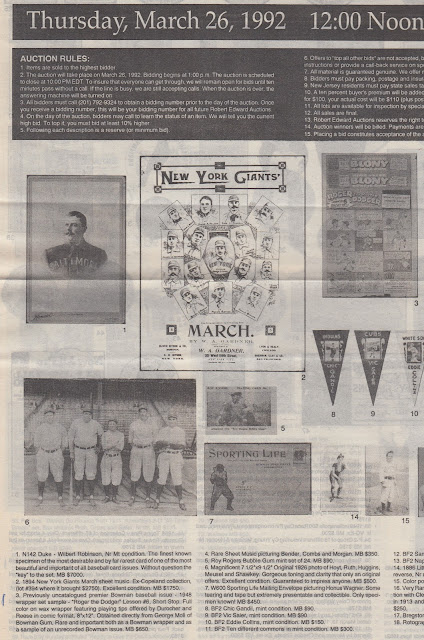 Here is a blowup of the blurb:

Leo Durocher and, as it turned out, his coaching staff (Jake Pitler, Ray Blades and Clyde Sukeforth). plus some players, would present tips for the younger ballplaying crowd to enjoy as they chewed away on potentially monstrous piece of bubble gum dubbed King Size Blony. As you can see Pee Wee Reese was also helping demonstrate the nuances of playing shortstop, although Durocher was no slouch at the position.  Indeed, he was Brooklyn's starter at the position in 1938 and 1939, before it was claimed by Reese!

The wrappers, which are flat as they were never folded, measure around 7" x 12" and would seem to have been intended as a loud retort to Bazooka's five cent roll, which had launched nationally during the summer of 1947.  The sheer size has me leaning toward a ten cent chew as that's a massive amount of real estate for a nickel gum wrapper.

However, the choice of Durocher was a curious one as he was coming off a year's suspension from Major League Baseball and whether or not that had an impact, the set never saw the light of day.  The REA description also indicates a planned series of Yankees-oriented comic instruction was being planned and it would be very interesting to know what they planned to dub it.   Presumably it would have been presented by the Bombers manager in 1948, Bucky Harris, and his coaching staff, which included Charlie Dressen, who later went on to manage in Brooklyn.

The 1992 example is almost impossible to make out but thankfully a larger stash of a complete set of 10 was consigned to REA for their Spring 2014 auction: The originally auctioned single wrapper matches the one at the bottom left of the frame (and the one at left, below) but more than one example of it exists as the 2014 description seems to paint it as not being in a flattened, or proof, state. The proof wrappers (and the wrinkly single) don't seem to have been part of the Topps purchase of Bowman in early 1956 but rather are described as coming from the archives of George Moll, whose agency prepared Bowman's many sets over the years. 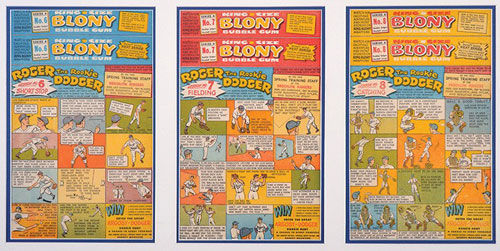 Too bad these never saw the light of day, they look fairly appealing and while the artwork appears a bit basic, they are colorful and there is a multiple Hall of Famer lineup; presumably other Dodgers players were used as demonstrators (it's not possible to tell from the scans) and their roster was well stocked in terms of Cooperstown enshrinees, so more HOF power seems quite likely.
As for the presenters (I think it says "Spring Training Staff" actually) and their cards from the years before 1948, Durocher of course is pictured on numerous cards from both his playing and managing days and Blades made a few sets as well.  Pitler and Sukeforth had some appearances in picture packs and the like but none of the four were in the 1948 Bowman Baseball issue.