Flame On! And On!

I've touched upon Philadelphia businessman John Connelly here previously and have been looking into his background in deeper detail as I slowly work on the second edition of my 2013 guide to the early days of Topps. I've got an almost ridiculous amount of updates and corrections to make to the book and work continues slowly apace. But I digress.

To refresh your collective memories, Connelly Containers produced the corrugated cardboard shipping cartons used by Bowman (essentially renamed Haelan Laboratories in 1952 with the old brand names retained). It's possible they produced their retail box flats as well but I've not been able to corroborate that yet.  In connection with this, BFF o'the Archive Jeff Shepherd passed along, a long, long time ago, a piece (recently rediscovered by moi) from the March 23, 1953 issue of Life magazine and indicated Connelly was about to join the Haelan board when the article came out but I've got it in my head (and book) that he did so in 1952. I need to do more research obviously, despite the dates being relatively close, but no matter for the purposes of today's post.

Early in the morning of January 24, 1953, a watchman noted a fire burning at the brand new, and still not-quite-finished Connelly Containers plant, located between 51st and 53rd Streets at Botanic Avenue in the heart of a greater-Philadelphia industrial neighborhood.  The blaze quickly engulfed the two blocks long building - no surprise given all the paper pulp and cardboard stored there - then spread to several adjacent business (including a Firestone tire factory).  Thanks to a stiff wind blowing in from the Schuylkill River that day, the fire quickly jumped some railroad tracks and engulfed four tank cars, getting perilously close to a fuel depot after an explosion took down a firewall and almost lit up a nearby ammo dump (!).  News reports described a "spectacular" fire that took took hours to get under control.  Amid suspicions of arson the FBI was called in due to Connelly doing some production work under a government contract but it ultimately turned out a vapor leak from the fuel depot had sparked the fire. It seems that absent the massive firefighter response (it was an 8 alarm fire) the entire lower part of the heavily industrialized neighborhood would have been consumed.

A huge rainstorm hit the area just after the fire was controlled (bad timing, that) and made a quagmire out of the now former factory and environs. According to several news reports, the only thing saved was a picture of Connelly's wife (I think a massive PR spin happened here!) but later that day he had already set up a temporary headquarters across the river at a local hotel and was receiving offers from heavy equipment manufacturers for replacement machinery.  Local competitors allowed already their ordered machinery to be diverted and also manufactured cartons for Connelly as he regrouped. The "all hands" response was inspiring but perhaps no surprise given John Connelly's philanthropic efforts and community support in the city over the years.

Here's some pictures of the carnage: 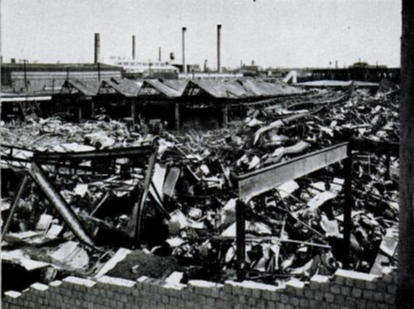 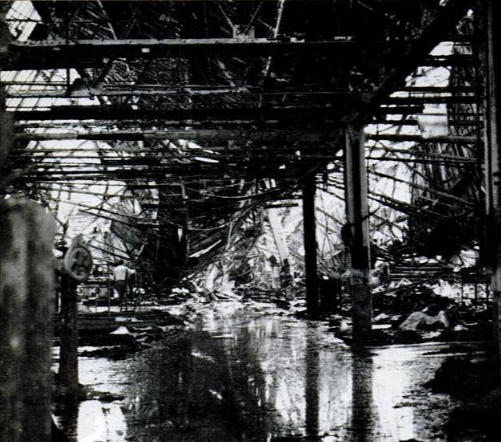 Despite all the water from fighting the fire and the storm that hit later, there were still smoldering pockets scattered throughout the area that required an around the clock fire watch for weeks-yikes! Damages to Connelly's plant and equipment were ultimately determined to be $3,000,000.

John Connelly, unhesitatingly, quickly bought an old Carnegie Steel plant, known locally as the Pencoyd Iron Works, at the foot of Righters Ferry Road for $500,000, several miles north of the old location. Quite impressively, it was up and running on March 3rd, less than two months after the fire.  Connelly though, wasn't to stay there long.  Following his acquisition of Haelan Laboratories in 1955 he moved his company from the Pencoyd works, heading further north to Bala Cynwyd, a suburb of Philadelphia and all the remaining Bowman and Haelan Labs manufacturing and packaging equipment soon followed from their old Stenton Avenue factory.

Bowman's plant was only a mile or so away from Bala Cynwyd but the move had a lot more to it than convenience. Connelly had big plans and some Haelan products aligned with his larger vision that resulted in him ultimately taking over Crown Cork & Seal (now Crown Holdings). Prior to this he sold Bowman's remains to Topps in early 1956 while retaining a good chunk of Haelan Labs and making several interesting and inter-related business moves. He sure seems like he was a titan of industry, old school division.

As for the Pencoyd Iron Works, it is no longer old school and looks pretty swank now-check it out!


Dave you're really inching in on that history spectrum, some of your best research yet, and not even Topps. Gotta dig into the hardrives to find you more Bowman info...ps, I think the article was from Candy Industry, not Life.

Hey Shep-that article actually ran in Life 3/23/53, maybe it was reprinted in Candy Industry (or vice-versa)?