I love stumbling across various bits of Topps ephemera on my computer (or should I say cloud?). You can sometimes get a sense of how the company was promoting certain brands or distributing products.

Here's three different bits o'paper from a long time ago, recently rediscovered and sent to me by Jeff Shepherd. First up is an order form for a trade association that managed shipments for The National Association of Variety Stores.  This is quite similar in nature to a form used by the  Consolidated Merchants Syndicate. 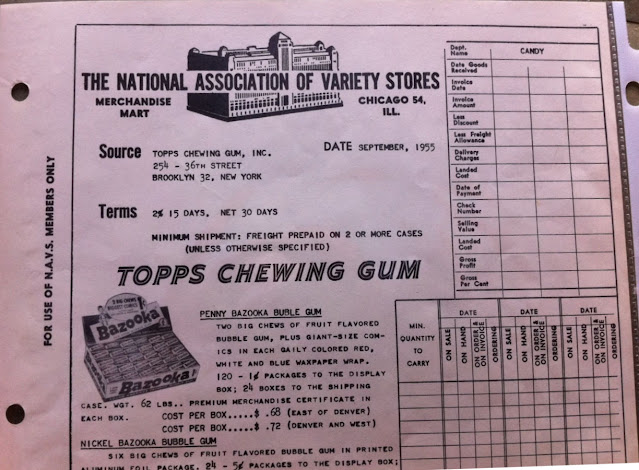 So 2,880 pieces (tabs in the vernacular) of Bazooka was $16.32 east of the Rockies and $17.28 out west, as long as you bought two cases minimum.  Pricing seems to be the same as wholesale for the time so the cost to a trade association was the same as that offered to any other jobber or wholesaler buyer.  NAVS  members each had their own exclusive territory, although non-members could have as many stores as they wanted of course. I wish the rest of the form was visible!
Speaking of jobbers, Ventura County Tobacco Co. appears to be one; note the pricing for 1957 Football matches the Bazooka pricing above for the west coast (60% of retail).  Bazooka proper was the same price from two years earlier to boot: 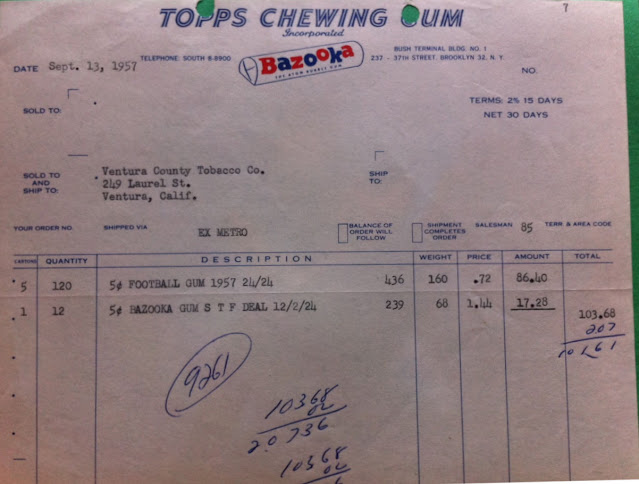 The handwritten calculations indicate the jobber was working out the "2% net" prompt payment discount.
Finally, we get what looks like an "extension bonus" payment to Frank Howard. He seems to have preferred cash to merch!

Stamping and mutilation (what, no folding?)-that's a long way from snapping two images on your phone to deposit a check!

First National City Bank, now known as Citibank. No bank at that location now. Maybe it was where the Dunkin Donuts is now.

The price may not have changed from 1955 to 1957, but it does appear that Topps moved a block (or just acquired more space). I'm new to the blog, so that might have been covered before?

Welcome! Yes, they had two buildings across an alley from each other for a few years, which ended around 1966. I've got some old posts covering the locations (and some others), you can backtrack too from them: http://www.thetoppsarchives.com/search/label/Topps%20Bush%20Terminal