These Go To Eleven - Then Go Crazy!

Today we continue the saga of the 1970 Flags Of The World set. I've taken a couple peeks under the hood previously, with the most comprehensive look being made here back in 2017.  Some new and frankly, puzzling, developments have recently occurred with research about the set and its related insert, which I've dubbed Money of the World, after the name given it by Topps on the test wrapper. Check it out: Ignore that penciled numbering, a long time ago a dealer used this to store cards from what was likely the first test of the 1970 series.  The best part about that is Friend o'the Archive Lonnie Cummins advises they were just reprinted 56's (or even actual 56's; no one can tell apparently, although he's trying)! Except for the splash panel hawking the insert for 1970, the wrapper art is from 1956 too.  Said dealer could do this as the test pack was actually an envelope: 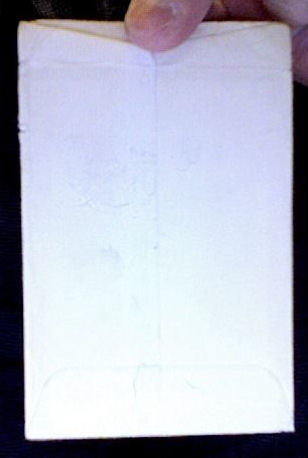 An envelope was needed as the 1956 cards were in the original Giant Size (one of the last to boot), too tall for what we now call a standard sized pack.  The envelope test pack concept was seldom used by Topps; they only did it a handful of times from what I've seen, usually when non-standard size cards or inserts were in the mix.

The set as issued for retail consumption consisted of 82 stickers (yes, although they look more like cards): 77 Flags and 5 Dictionary "cards" made up the subject release.  The Dictionary cards were  stickers really stickers though, and each showed four phrases or words in English converted into phonetics approximating the featured language.  All 82 stickers required moisture to be applied to allow them to stick, just like 1967's inaugural Wacky Packages set. We'll get to why the Dictionary stickers were called cards in a minute; here are two of them: 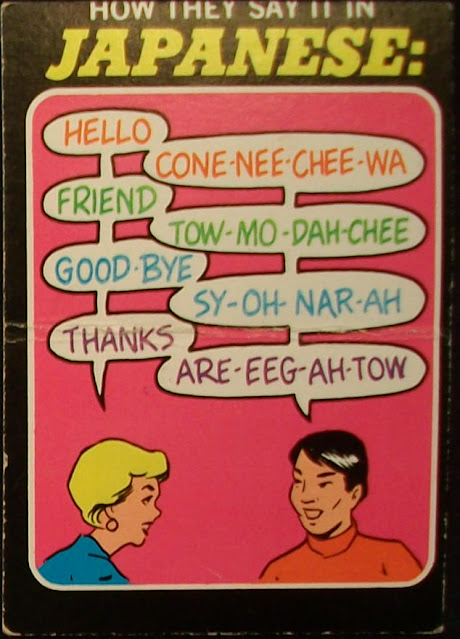 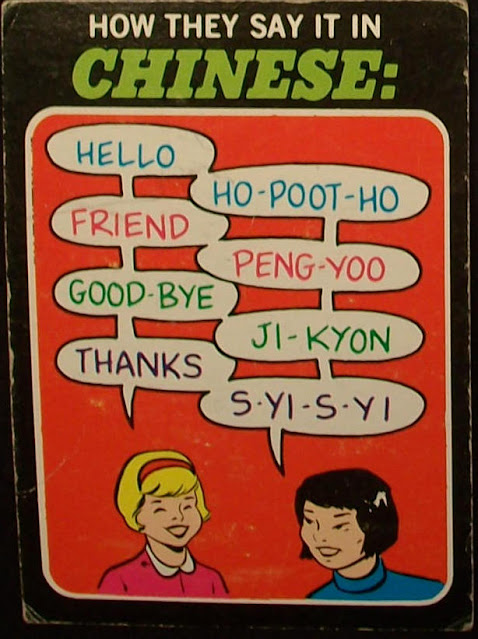 The original images sent to me by another Friend o'the Archive, Michael Branigan, and while those two are a bit oblique as snapped, you can easily see from the Japanese example that the factory cuts were often abysmal. I used these as exemplars since they show a key difference between the test and retail releases. This is the reverse of a regular issue sticker for Japanese, No. 3 of 5 in the sub-series and handily doing double duty as it shows why these were, in fact, stickers: 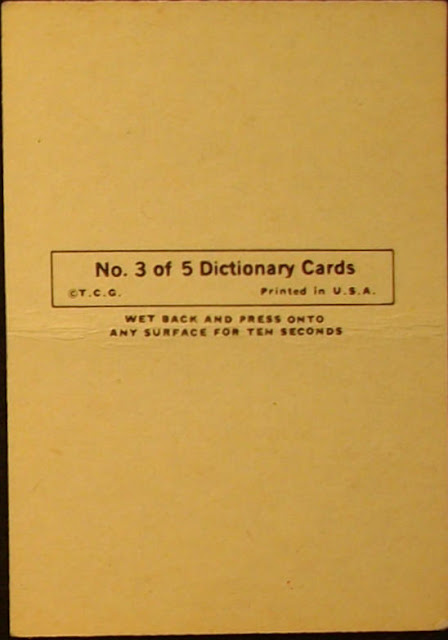 But look at the back of this card for Chinese: 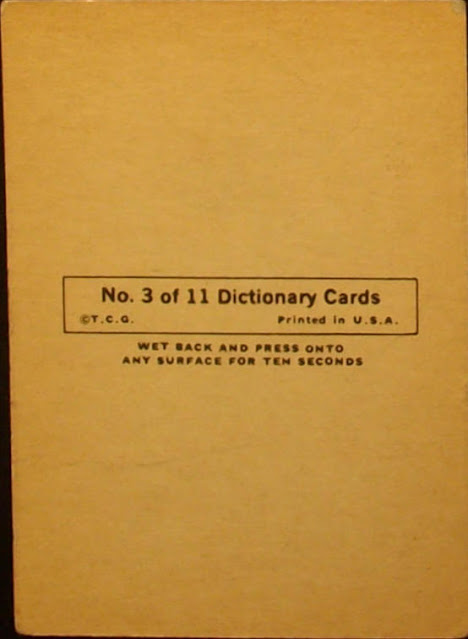 Yes, it goes to eleven!  Not only that, Chinese was sticker No. 4 of 5 in what now turns out to be its retail version, so clearly some rejiggering of the final sheet occurred.  Thing is, I'm not sure why as 77 Flags and 11 Dictionary stickers would be a classic Topps 88 array, with three full sets printed across the 264 count press sheet.

Lonnie sent me some 66 sticker finished half-slit proofs shots from 1970 that may shed a little light. Here is the front: 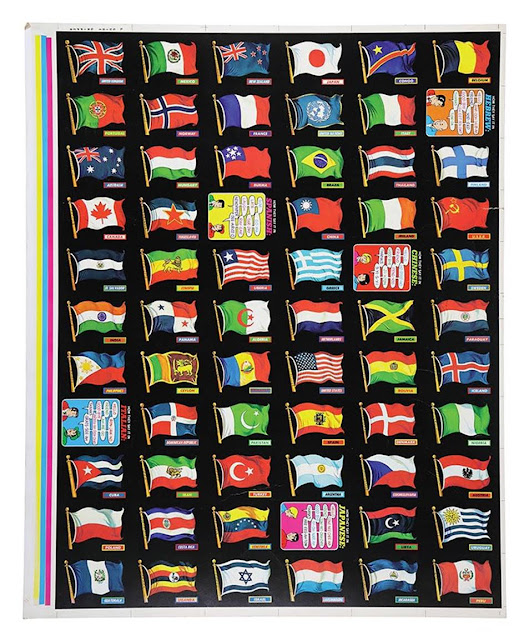 Right away you can see the five Dictionary stickers are scattered throughout the array.  Two more columns should get us to the 88 sticker impressions we need for 77 Flags plus 5 Dictionary stickers, with 6 stickers being extra prints.  However, the reverse of the sheet muddies things considerably: 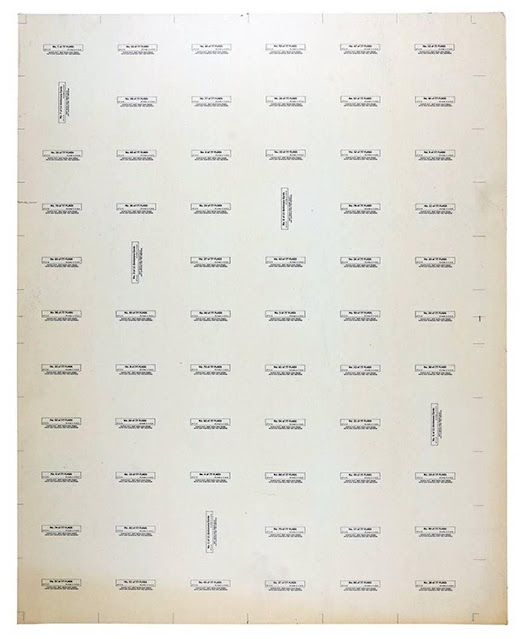 It's hard to make out detail so here's a partial also from Lonnie: 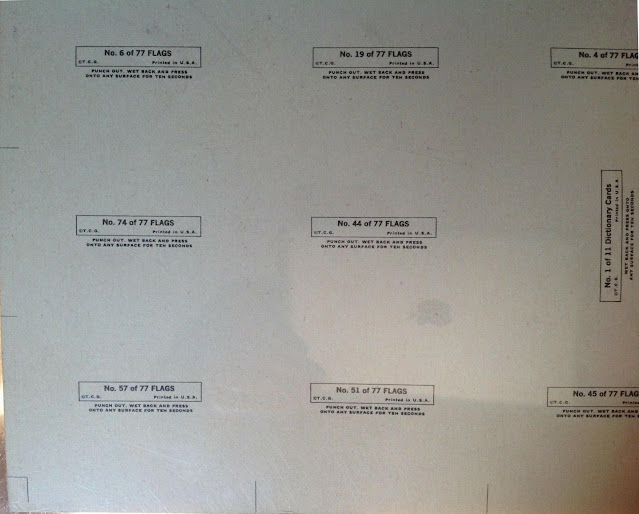 The five Dictionary stickers are all "x of 11" while the Flags are "x of 77" (solve for "x" LOL) which means only 61 Flags are represented. This is not unusual as 22 card/sticker proof arrays split off form the larger ones were quite common with Topps.  Often (but certainly not always) that's because the two rows they encompass were designed to be extra prints.  If you extrapolate this 66 card proof to an 88 card version, it's clear you would need the two extra columns to get enough Flags into the count of 77, 16 to be exact.  Add in 6 more Dictionary stickers and the math works out perfectly for an 88 sticker set (77+5+6).  So what happened?
Well, I am guessing that the set was indeed planned to be 88 subjects in length, using both flavors of sticker to get to that marker but with 6 more countries added to the Flags. Then after the test marketing was done and work commenced on the larger retail set, a mistake occurred that "corrected" the regular issue and nobody at Topps HQ figured out they were off by 6 until it was too late. Lonnie's sheet's reverse math is plainly obvious: 77 +11 to equal 88 once the full array was composed makes a ton of sense. From what I know of it, Topps printed the backs of their cards (stickers here) first so when they were shipped out and then later matched to the fronts, someone must have noticed the numbering mismatch at some very late stage in the proofing ("whaddya mean there's not 11 Dictionary stickers?!"). There was some renumbering of the Dictionary stickers of course to compensate obviously but it's a lot easier to correct five reverses than seventy-seven.
One of the central questions for test issues of this era is how do you tell the test from the regular issue?  Most 60's and 70's issues have some type of slight difference if a full release followed a successful test.  Topps would sometimes take two rows, or columns (of 11) - depending upon the orientation but you get the idea - from a proposed sheet array, which often resulted in skip-numbering of a test issue, as they used two rows for the test printing.  These, for reasons that I've never really understood, were not necessarily the cards or stickers from the commonly-encountered two "extra print" rows. Generally the minor difference in was that the indicia on the card's reverse would be changed (from T.C.G. for the test to Topps Chewing Gum for example) but in the case of Flags of The World, T.C.G. remained onboard.
So as for the Dictionary stickers, no one has ever seen any languages beyond the five shown here. Which means you can only ID the test stickers if they have the "x of 11" numbering, i.e. the difference is on the Dictionary stickers only. There were only 77 Flags designed it would seem, and Topps just went with six double prints to fill the Dictionary gap, which I'll get to below.
That should be the end of it, right?  Well, no.....as there was also a more "cloth-like" version of the stickers tested in 1973!  I actually have one, but it's in the Topps capsule used for their online Vault sales, although close examination does reveal some slight fuzziness (and die cutting): 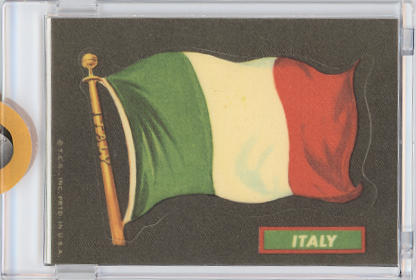 Note the front indicia that was added for '73.  The reverse is just blank cardboard, numbering be damned! It's T-5 in the test numbering scheme used by Topps at the time which, thanks to Lonnie's research, we know was chronological and covers at least 126 tested products, not all of them cards or stickers.  These range from T-1 in 1973 (Emergency! - Adam 12) through T-126 in 1980 (a Baseball blister pack). Topps got their own dating wrong on their COA  (not uncommon) as below, with apologies for the cock-eyed scan (my cert is presently MIA) but the sheet used to produce these has a date on it of July 31, 1973. 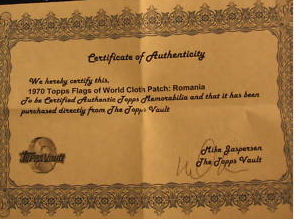 Here's the 1973 sheet, which is has 44 Flags and is flimsy since it was probably sticker stock: 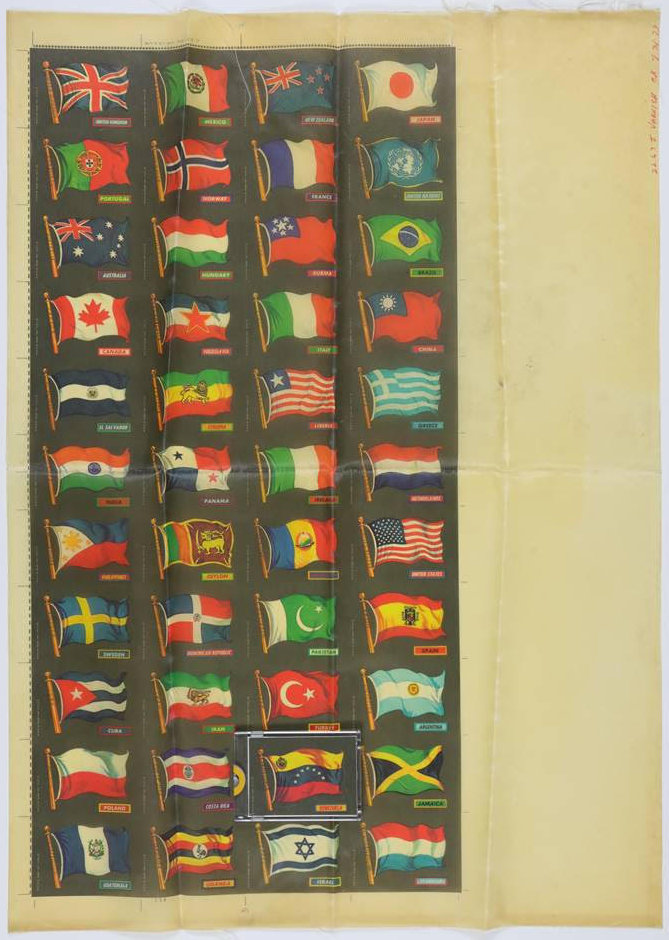 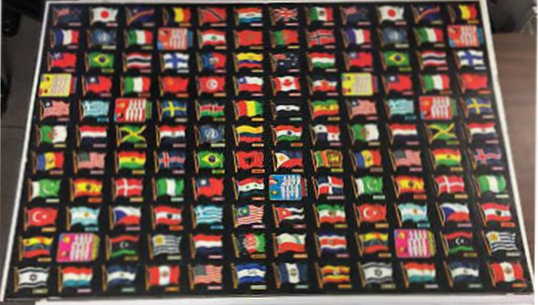 Switching gears, here's the dating and test code from the 1973 sheet:

I'm not sure the 1973 cloth test stickers ever hit retail, although Lonnie thinks the presence of a T-Code means it probably did.  Maybe someone out there can show me one that was found in the wild but I've only seen them as proofs from the Topps Vault, which means they are always encapsulated by the time I eyeball them.
Topps was very much experimenting with stock and textures at this time, so who knows what they were thinking with the 1973's? The materials may not have melded properly (a common problem for their cloth and sticker experiments in the early and mid-70's) or perhaps the juggernaut 1973 Wacky Packages issue just overwhelmed any thought of putting these out.  Or the test could simply have failed.
At some point reasonably soon I'll tackle the currency inserts, which are yet another tangled web courtesy of Topps!
Posted by toppcat at 8:00 AM