Topps Rails & Sails, a 1955 issue that ranks as one of the crowning achievements of the Giant Size era, may have begun life as two distinct sets that were eventually blended together for retail.  Their schizophrenic fronts have Rails cards with borders and Sails cards with full bleeds while the backs also differ in composition as the Sails cards feature a grayed in back over about 75% of their surface area with a full bottom bleed.  A couple of uncut sheets surfaced this week on Ebay that illustrate this: 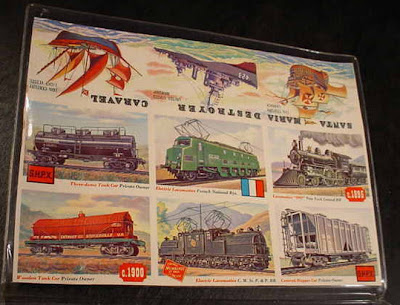 The Sails portion of the sheet is upside down in relation to the Rails cards.  The next row of sails would have the same orientation as the Rails cards as the gray would be printed as a big block of color on the reverse of the uncut sheet: 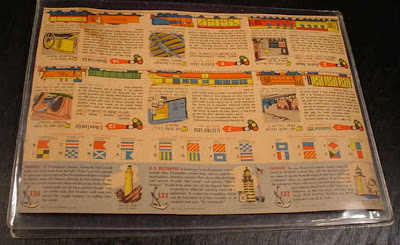 Each card back has a distinct drawing or two-the amount of detail is amazing!  As is often the case I can't find a sheet back showing both orientations but I have something better-a sheet of Rails & Sails Stamps: 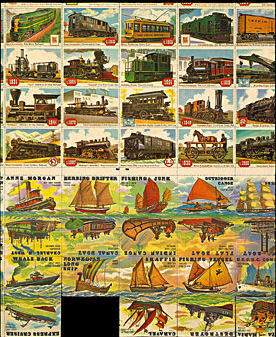 Sold in a 2004 Mastro auction, the gutter separating the Rails and Sails stamps differs from the way the cards were printed as there was no separation of genres.  These would be related to the just-as-rare Topps baseball stamps from 1955, unblogged upon here at present.  I've never seen any other examples of the stamps!  Their existence though, helps show the flip-flop orientation of the Sails rows.  Some partial stamps are also present, a tantalizing hint of a larger sheet.

I am not certain if the set was printed in a 100  or 110 card configuration, although I slightly suspect the latter as the baseball cards from that years were arrayed 11 x 10 on each half sheet, for a 220 card full sheet.  The cards though, are also printed schizophrenically as #1-80 (all Rails) and 131-150 (all Sails) were printed together in a first series that would probably have three groupings of the 20 Sails and two of the 80 Rails (or one less grouping of Sails if a 100 card array was used).  This type of series breakage was used for the 1954 baseball cards so a 100 card array is certainly possible.

The second series was printed in significantly lesser quantities and features the opposite chunks o'cards: #81-130 for the Rails and #151-200 for the Sails.  100 cards per half sheet would work out neatly but the stamp configuration makes it seem like a row of Sails could have been slipped in between the Rails and Sails, meaning a likely extra row of Rails and one of Sails for a 110 half/220 card full sheet.  Whew!

The box and wax packs are magnificent: 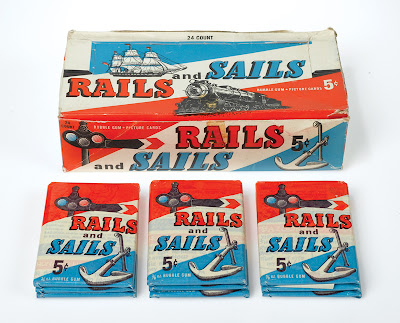