On the rare occasions that I decide to plumb the depths of my hard drive looking for stray scans that have been misfiled, possibly due to various degrees of being overserved or underfed, something pretty cool usually turns up.  Tonight is no exception as this little guy magically appeared as I was looking for some long lost documents somewhere to the right of what used to be the C:/ prompt: 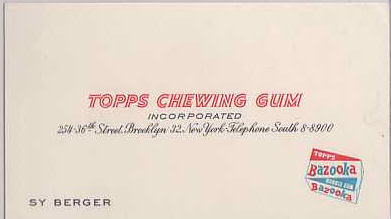 Don't bother calling, the number has been long disconnected from the Topps switchboard.

A couple of clues can help us date this card.  First off, Topps started using the "Topps" name on their Bazooka penny packs in mid-1958; before that it said "The Atom", as in "The Atom Bubble Gum". With nuclear annihilation a lot more probable once Sputnik let out its sonorous, orbital beep, Topps probably felt it was a good time to split from the atom.  Our second clue is the "Brooklyn 32" postal code.  Two digit city codes we replaced in 1963 by the now ubiquitous ZIP code. So this business card dates from sometime in the 1959-62 time frame.  The old "SOuth" telephone exchange could have been in used after 1963 but makes me feel quite ancient as the use of such phrasing slowly faded away as I was growing up.

While Sy was well known enough to the point of not needing to share such mundane things as his job title, the simplicty of his card pales when compared to that of Ted Rehm, a Louisville agent or sales rep for Topps: 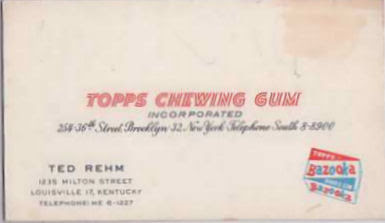 The Berger card places him in Bush Terminal, the corporate home of Topps at the time. Mr. Rehm's places him in a residential area, so he was quite possibly operating out of his house. Ted's card is from the same era as Sy's.
Posted by toppcat at 7:24 PM