As luck would have it, I was perusing some old NYC/Brooklyn books yesterday and spotted, in plain view, a picture of the building that housed Morris Shorin's American Leaf Tobacco Company in Williamsburg, Brooklyn.  That's the good news. The bad?  It's a low-res shot and it was taken a little before ALTC would have moved in.

Morris Shorin (Chigorinsky at the time), I am 99% convinced at this point, was making and selling cigars and other tobacco products in partnership with a man named Metz (or Melz) from at least 1905-07 before obtaining a loan and starting the American Leaf Tobacco Company in 1908, possibly reviving the name of a firm that had probably shut down a couple of years earlier.  I would really like to get the story of the whole ALTC history firmed up but need access to some information that itself needs to be tracked down.

Chigorinsky and Metz operated out of a building at 140 Throop Avenue on the bustling Williamsburg, Bedford-Stuyvesant border (and which was possibly the prior location of ALTC in the 1890's). This would have been an ideal spot for a tobacconist's shop and was located quite close to where the family lived at the time. What is known is that sometime between 1908 and the summer of 1917 (probably much closer to the former rather than latter date) the ALTC moved to 7 Debevoise St in Williamsburg, just a couple of blocks away from 140 Throop Avenue.  This too would have been prime retail territory but the building would also have facilitated a second story business; possible retail and wholesale operations were undertaken at the same time.  Two stories of apartments comprised the 3rd and 4th floors.

Located down the street from a huge vaudeville theater and next to a cafe, 7 Debevoise St was captured in a Brooklyn Daily Eagle Post Card around 1906.  I found the shot in a great book by Richard L. Dutton called Brooklyn:  The Brooklyn Daily Eagle Postcards 1905-07 and have cropped out the building to show here (twice, as I have tried to enhance the picture). I am not sure if that second story sign (which I cannot yet decipher but might say Can Can) was for #7 or #9 (building to the right of this one).  While not quite an ALTC shot, I'm getting closer!

Here is the wide angle shot reproduced in the book-it has more detail when not blown up: 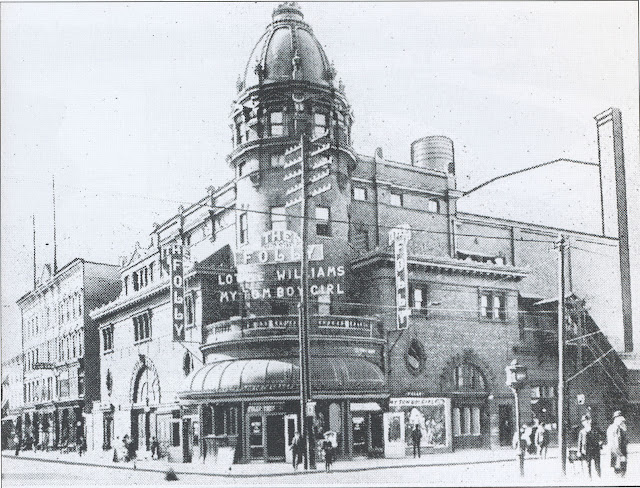