The advertising materials used by Topps in the early days of card and novelty production were quite varied.  Television was not yet entrenched in homes when the first Topps sets started coming out in 1948, so radio and print ads were really the two biggest methods available. Topps would provide their jobbers with advertising materials to be passed on to the retailers to help sell product and the earliest example I can find comes from 1949-a window display for Flip-O-Vision: 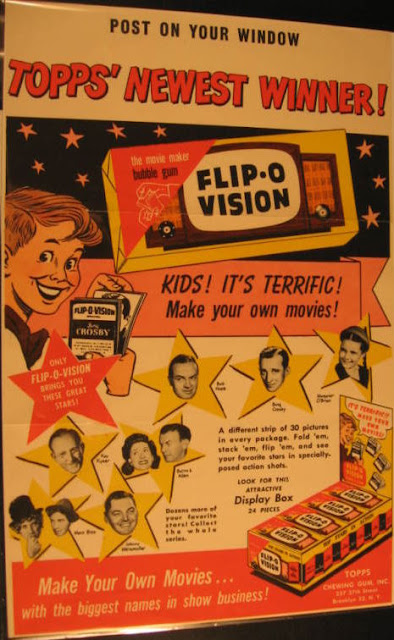 There are some big stars used to entice the kiddies to spend their nickels: The Marx Brothers, Bob Hope and Bing Crosby are still well-known today and Burns & Allen, Johnny Weismuller and Margaret O'Brien would not be far behind.  Kay Kyser though, the bespectacled middle aged gentleman above Harpo and Chico, would not be a name known to many.  Kyser was a bandleader in the swing era who had a TV show that was enjoying some popularity in 1949 but just a year after this set came out, he walked away, never to return.  He eventually ended up becoming President of the Worldwide Church of Christian Science.

Four years later Topps had taken the muted tones of 1949 and turned them into the bright colors of 1953: 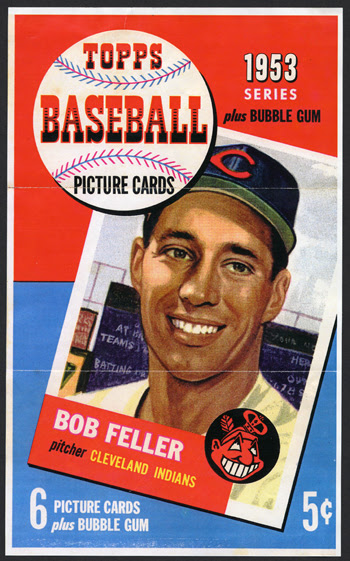 Color movies had started to appear more frequently by 1950 so bold colors were showing up more and more in Topps packaging and ads.  This took another 22 years to reach its logical conclusion, when the crazy quilt 1975 Baseball window display was unleashed on an unsuspecting public: 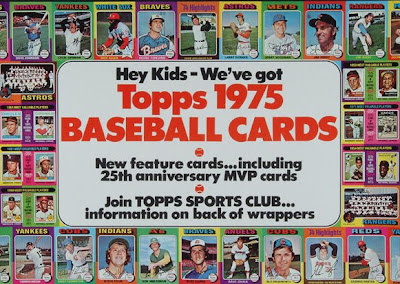 The Topps Sports Club has been covered here previously but the use of the window display to push yet another Topps product is a little brash, no?
Posted by toppcat at 7:08 PM