One of the early sales and marketing strategies employed by Topps centered on vending machines, or "automatic merchandising" as referred to in the trade.  Some of us would know of such machines from the glorious times of our misspent youth at the arcade (and I don't mean the video game arcade) or buying gumballs at the grocery store when Mom got her change at the checkout.

The use of coin operated vending machines to sell low cost merchandise dates back to Victorian times (the first one sold postcards) and in a more familiar way, the first gumball machine was introduced in 1907.  The use of such devices really took off following the invention of the cigarette vending machine in 1926 as this had the effect of allowing the large, established network of tobacco jobbers (wholesalers) in the US to branch out and distribute anything that could be sold where cigarettes were vended unattended.  For a company such as Topps, which had longstanding ties to the tobacco jobbers from the American Leaf Tobacco Company days, this was a boon to business as their gum could be sold alongside cigarettes in taverns and lunch counters by wholesalers they were familiar and comfortable with.

Topps sold their gum in non-automated displays as well but were players in the vending field as well before the war intervened.  After the war though, they fully embraced the use of such machines and in 1947 appointed Charles Zubrin, a key figure in their history, as supervisor of their vending program.  By 1949 they had created an entire Automatic Merchandising Division and named Zubrin as its Director of Sales and a year later he was the Merchandising Director of the division.  Soon thereafter Topps announced they had greatly expanded their distribution chain, adding many additional automatic merchandising jobbers to their already bulging roster.

The vending machines would initially sell Topps Gum tabs and Bozo gumballs but once Topps started making cards they also sold these on their own.  Amazingly, an old vending box from 1949 surfaced recently, as uncovered by Mickey's Sportscards.  This plain, unmarked box, held 500 tiny X Ray Roundup cards:

The above box, or more properly, sleeve held 500 cards and there were six in a larger carton, described as the same size as a cigarette carton.  That actually makes a lot of sense if Topps was trying to use a packaging form familiar to the tobacco jobbers.  The collation on these was quite poor; only about 30 different cards per sleeve and, oddly, over the entire "six pack" as well.  Yes, 3000 cards yielded about 100 of each example! I would estimate the above box would be the earliest form of vending packaging used by Topps as only a couple of sets predate X Ray Roundup.

There was an earlier vending find of these a few years ago, albeit without any boxes being mentioned and a sampling is shown below: 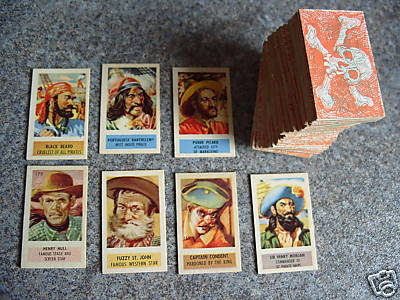 The more familiar form of packaging for these cards was a Pixie gum pack:

It looks to me that the red "X Ray developing paper" used to decode the back of the card is packaged on top of the card proper.  The inner wax wrapper holding the gum was dark green on the examples I have seen; the outer wrapper is plain paper: 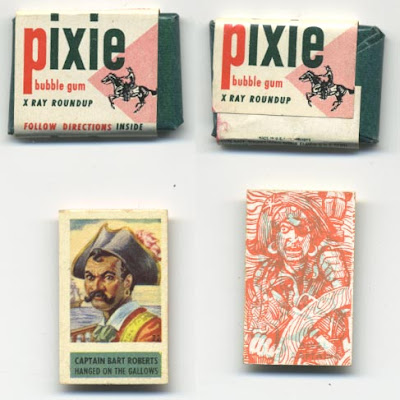 X Ray Roundup sold well but a final print run may have led to overproduction after the marketplace was saturated and probably led to a number of vending sleeve returns. Comic book ads from 1949 touted the fact you could purchase small groups of these cards from Topps for fifteen cents, which came with a small plastic viewer to decipher the back. The original developer, as you may have surmised, was flimsy cellophane, as evidenced by this ad: 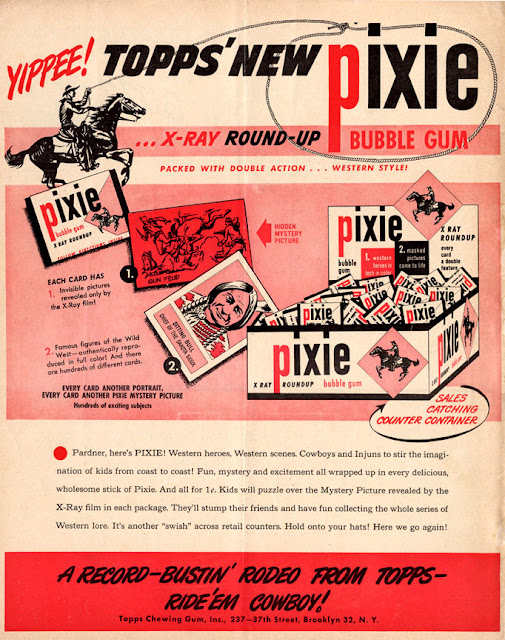 There is a related set of stamps, which will be commented upon separately, as therein hangs a tale.....