Further to my previous post on the murky origins of the American Leaf Tobacco Company, one of the predecessor companies to Topps owned by the Shorin Family, I obtained from Carol Jablow last year a clipping from a February 1968 tobacco trade journal that speaks for itself, although I will offer some detail after you all take a gander: 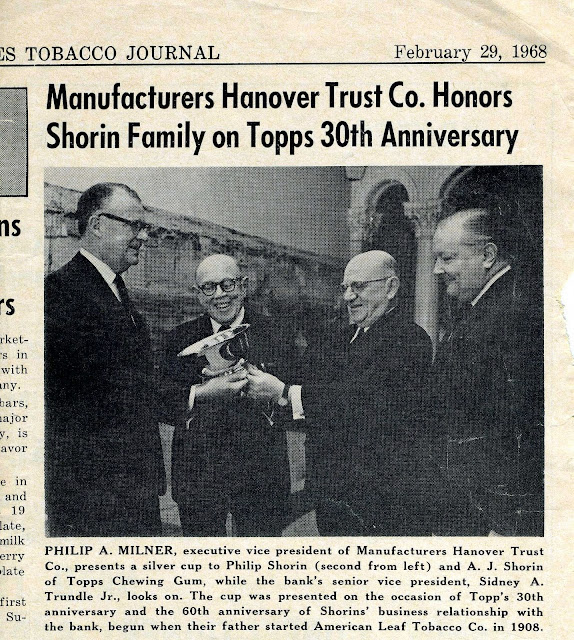 This seals the deal for me date-wise as far as the Shorin family (actually, the Chigorinsky family at the time) and the founding of the ALTC. Whatever involvement Morris Shorin had with the earlier ALTC (circa 1890-91) , as owned by the Salomon family and, perhaps, in an even different configuration from circa 1897-1904, by a separate group, it seems the version started by him dates from 1908.  The 1890 "official date" always given out by Topps predates Morris's arrival in the US and as described in the caption, does not seem to correlate with the facts as understood by Manny-Hanny's loan department.

So why did Topps insist that the ALTC was founded by Morris Shorin in 1890?  It does not seem to make a lot of sense as that part of the narrative started in the late 50's or early 60's, well after the ALTC had been dissolved and a good dozen or more years after the death of its founder.  Like so many questions involving the history of the company and the family, the answers are slow in revealing themselves.
Posted by toppcat at 4:16 PM