Can You Tell Me How To Get To Stufflestreet?

Trick question as I already know the answer.

One of my old online buddies, Chris Stufflestreet, has started a new blog (his fourth!) called Vintage Sportscards. Chris has been writing about cards for a good while now and had an online newsletter that ran close to 60 issues before he shut it down. Unlike your blogmeister, Chris touches on way more then Topps cards. Click the link, you'll see!

Chris has also made some comments on recent posts here and rather than make you dig them out I'll just linky-dink them within his comments.

In Back In Black, I showed a Topps Presentation Board covering an Empire Strikes Back mockup with a collectors box. Well, Chris actually bought one of the darn things and had this to say about it:

"There was a collectors' file box included with some early releases of ESB Series 1 product. Though 30 years' worth of intervening time has made things a little hazy, my first purchase of those cards was something like a cello/rack pack and a little red box with Darth Vader's image (like the one on the Series 1 checklist card) was included with it. I think the box only held maybe 50 cards. I remember thinking it was useless to have a box that couldn't hold the complete series."

I have to confess I had never realized the box was an issued product, although as we get closer to the 1976-1980 my attention span tends to shrink.

Concerning my Berger Boss post Chris has shared this about the 1977 Lou Piniella card:

"Steinbrenner was really pissed after the game...George loves Lou and hates it when he doesn't play. Lou is also George's son's idol. Last year when Burger King put out a set of baseball cards with the pictures of the Yankee players on them, they forgot to include Piniella, and Geroge called them up, reamed their ass, and made them print a special Piniella card to add to the set." "

And finally, Chris proves that a good pair of eyes beats a bad pair any day, when he pointed out the 1948 Magic Photo card of Connie Mack discussed in Presto! did indeed display his name on the front.

"The letters are certainly present in Mack's card...look at his legs and you'll see parts of the letters "C" and "A." "

Sure enough, Chris is right; I'm just too contrast-challenged to have seen it. So much like a politician on the wrong side of the polling, I'll go negative to show you what I mean: 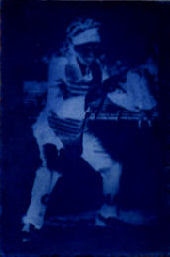 It's even more noticeable on this close-up neg:

Well, two mysteries solved and an amplification of a loud Steinbrenner nugget; not a bad day Chris!
Posted by toppcat at 3:25 PM