Well campers, sometimes things are not as they seem. A few clicks ago guesses were made as to the identity of Woody Gelman on a 1970 Topps vanity issue. Well, it was all so horribly wrong!

First of all, it turns out Woody Gelman, while he may have been the Art Director at one time, was head of the Product Development Dept. and not the Art Dept. when these cards were made and was for the Non-Sports side of things. The Art Department was a separate group that worked under Ben Solomon and toiled on the baseball sets (and presumably other sports as well). Mr. Solomon was responsible for final proofing and packaging of cards.

Second, that means Woody is not depicted on the Art Dept. card. Well, rats!

Third, we do have some detail on two denizens of the Art Dept. Here is a numbered scan: 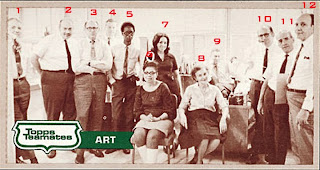 The prior guess was that #9 was Woody Gelman. Not so, obviously and he remains a mystery. Ben Solomon is #12 according to his daughter and # 3 might be a fellow named Ted Moskowitz, who like Mr. Solomon looks to have been an animator before he came to Topps. If anyone has other ideas or some guesses as to who's who, let me know.

As it turns out, the Product Development and Art Departments remained behind in Brooklyn after the move of production facilities to Duryea in 1965. There were clear reasons for Topps to do so, both from a talent persepctive (starving artists did not live in Duryea, PA in the numbers needed by Topps) and business one (connections to Major League Baseball and presumably other sports leagues, Wall St., media and ad outlets).

I am starting to find a connection between the worlds of animation, golden age comics, MAD magazine, underground comics and Topps that all comes to a nexus at the behest of one man: Woody Gelman. More to come on this as the picture develops.
Posted by toppcat at 8:14 AM