Back across the pond today lads, as we look at a couple of Cricket issues issued by the eventual Topps subsidiary A&BC Gum. 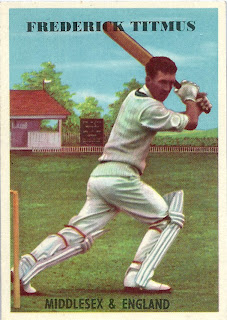 The colors are stunning and remind me of nothing less than the N162 Goodwin Champions set from 1888. The backs are more workmanlike: 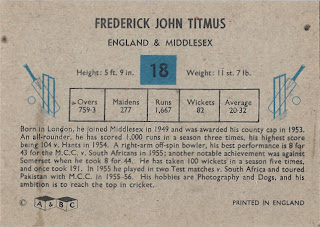 A stone is 14 pounds (or about 6.35 kilograms) in case you are weighing along at home. I am searching for a wrapper image but can't find one at the moment and suspect they are scarce.

After skipping a year,A&BC returned with another 48 card set in 1961. I had to nick these and the rest of the scans below from Ebay but so it goes: 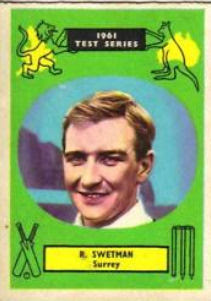 Colorful alright but not nearly as charming as the 59's. A Test Series is essentially the long form of Cricket, which takes days to play. The backs are off kilter for some reason, which seems intentional: 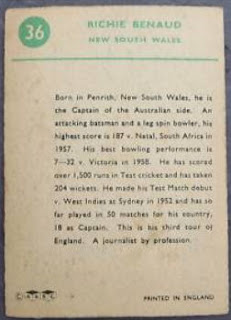 After 1961 A&BC produced no further Cricket series. For that reason I assume they did not sell well which may also explain the lack of a wrapper scan again.

The first A&BC Cricket cards though were issued in 1954 as part of a set called All Sport,which was exactly that; a set of 120 multi-sport, blank backed black and white cards that were designed to be pasted into an album:

I wanted to show a Cricketer but that scan is rough. Here is another scan from the set of a Cycle Speedway Star: 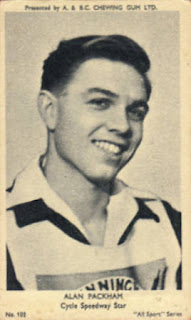 The cards measure 47 x 76 mm (about 1.85 by 2.99 inches) and come with either glossy or matte fronts. Surprisingly, I was able to find a wrapper scan for these: 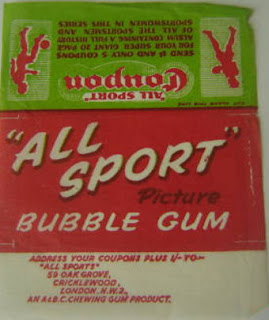 The coupon was how you got the album:

The album is proving elusive at the moment.

A&BC had only produced two sets previously, both in 1953 so this is one of their earlier efforts. For more on this great company you can go to Nigel's Webspace and bone up.

For the record, Blogger will not let me put an & in the Labels-sorry, I had to compromise!
Posted by toppcat at 7:23 PM