This is no April Fool's joke, kids-today we take a solid look at Duryea, PA home of Topps Chewing Gum for about 30 years commencing in 1965, after the move of most production of cards and confections from their Brooklyn base at Bush Terminal, although some corporate presence would remain behind.

"The Topps Gum Plant in Duryea was to be dedicated on May 18 of 1965. Some 500 people indicated they planned to attend the ceremony including then Governor William Scranton and Attorney William Shea, the man responsible for the construction of Shea Stadium for the New York Mets. Rumors swirled about Topps bringing in workers from their Brooklyn plant, but a major part of the labor force was to be recruited from this region."

The Shea connection is intriguing as he was one of the prime movers in bringing National league baseball back to New York in 1962. This also gives us a timeline for pruduction in Duryea and it sure looks like the first major sports set produced there would have been the '65 "tall boy" Football. Pittston, by the way, is essentially the next town west of Duryea.

In addition to the football set, I show the following sets produced in '65:


To that list you can probably add Bewitched and Flash Gordon, both essentially proof sets. The Bonanza and Daniel Boone cards above are very hard to find and as I have stated before, I believe Bonanza to be the toughest of any Topps set, issued or not. I am working on a unifying theory for most of these style of B&W cards (there are others as well) but need to do more work in the lab.

That is a big increase from the 1964 issues, which understandably enough centered around Beatlemania and was indicative of Topps' production big push going into 1966. But I digress.

Topps built their facility at 401 York Avenue in Duryea:

You can click away the balloon and see the bird's eye view in all its glory. I beleive Topps leased some space in the plant even from the beginning. Now, we have lucked out here today as Jeff Shepherd, a Friend o'the Archive if there ever was one, was able to snap some pictures there in 1999: 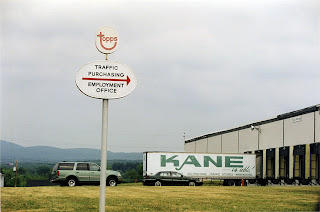 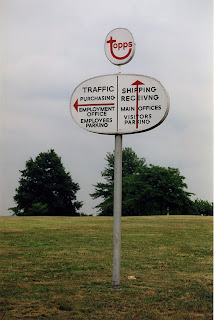 Jeff also shot the Topps entrance but cautions it looked completely different than it had on his first visit in the 80's: 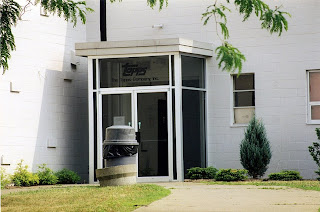 I'll delve into this subject more deeply but Topps' diminished presence was likely the result of their selling the plant in the mid-90's and then leasing back less space than they had previously used. This had to do with a lot of things but they moved their HQ back to New York City around this time ,leasing floors at One Whitehall Street in Manhattan, where they reside to this day.

Much more to come on the inner workings of Topps, stay tuned!
Posted by toppcat at 8:29 AM

Email ThisBlogThis!Share to TwitterShare to FacebookShare to Pinterest
Labels: Duryea