Well, Chris Stufflestreet has come through again. Our man of the hour last time out has been able to track down scans of the 1980 Empire Strikes Back Collecting Box. You will recall this was previously featured as part of a Topps Presentation Board for this set. 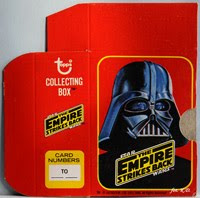 C3PO gets the reverse: 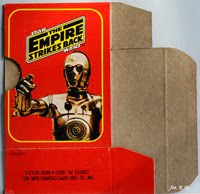 Here is the box assembled:

Chris actually bought one of these at retail at the time of issue in 1980 and recalled they only held 50 cards or so. These may not be scarce but you don't see too many out in the world these days. 1980 was when Topps was trying different packaging combinations in earnest that included a "kicker" that included things like this box. The 1980 Baseball Scratch Off Game is another example of this.

The Star Wars Series was a huge smash for Topps in 1977 and TESB followed suit three years later. Stay tuned for a look at another stellar set featuring the 1980 movie soon.
Posted by toppcat at 8:27 AM

Email ThisBlogThis!Share to TwitterShare to FacebookShare to Pinterest
Labels: 1980 Topps The Empire Strikes Back