Back to a subject I like a lot: 1951 Baseball Candy. In past posts I have written probably far too much about the five loosely connected sets that comprise this issue but Friend o' the Archive John Moran sent along some old ad poster scans that are worth showing and also help to shed some more light on the issue most commonly known for its Red and Blue Backs. Here's one that likely was a point of sale poster: 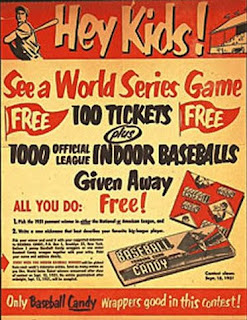 It's a little hard to read but you had to send either five penny wrappers or one nickel wrapper plus your picks to win the pennant in each league to Topps no later than September 14, 1951. I have to assume the thinking was the Series would be in New York in '51 (indeed it was, in the year of the Miracle at Coogan's Bluff; or, The Art of Sign Stealing), since it had been every year but one since '47 as that seems a pretty thin time frame to sort through and contact all the grand prize winners as the first game was scheduled for October 4th.

Clearly, this shows Topps intended for the cards to sell through the end of the season, a mistake they would repeat in 1952 as they were still learning how to read the market. I have a sneaking suspicion Topps may have tried to sell a last run of cards almost exclusively in New York City those two years.

Another interesting thing is that it shows the nickel and penny packs advertised together, something I have not seen before.

John sent another neat piece, a subway or bus ad, echoing the nickel packaging that exhorted kids to "Collect A Whole Deck", something I am close to doing almost sixty years later in both flavors. Those pesky blue backs still have me searching though: 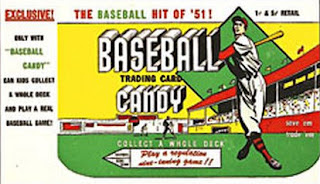