In my last post I showed a rare bird that is described as a 1952 high number blue and red wrapper. I'll show it again: 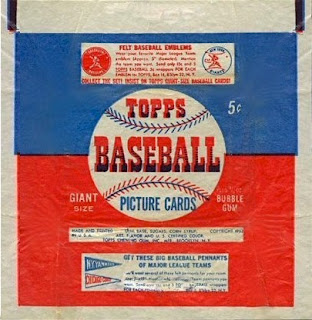 The above scan is from 1952toppsbaseballcard.com, a pretty cool site. They describe it as coming out late in the print run, likely just for the high numbers. Compare it to the normal wrapper, which is all Christmasy: 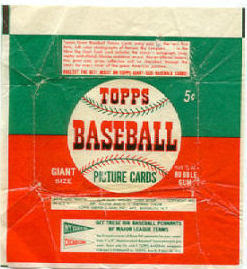 The site also notes the 5 inch felt emblem ad shown on the high number wrapper also appeared on the first series (#1-80) nickel wrapper as well, in the top white rectangle (which would fold over to become the back of the pack when sold). Just click the link above and you will see an example of this, along with some other '52 eye candy. You can find the green and red versions pretty easily; not so with the blue bird.

Inside the nickel pack, Topps used an inner gum wrapper:

Topps held back a number of major stars until the bitter end in '52 but they definitely had a New York tilt to the ads when advertising the high numbers: 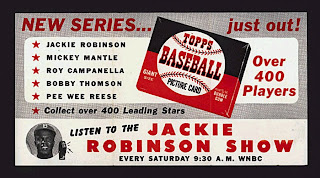 Topps had a major bus and subway advertising program to kick of the 1952 baseball cards but until Friend o'the Archive John Moran sent that along, I never realized they had overtly advertised the high numbers. That is a killer piece, I love the Jackie Robinson ad! No way to tell what the top color on the pack was to have been but it sure looks darker than green, even with the muted tones of the ad.

1952 Topps is one of those iconic sets I find endlessly fascinating, like T206. I hope to get more details on the high number wrapper this weekend at the National and will post any new findings when I get back.
Posted by toppcat at 7:01 PM

Interesting that Topps used a similar color scheme that would be used in '53. Is it possible these blue packs were used later on when Topps was trying to figure out what they would do with the overstock from the final '52 series?

Or...perhaps they were getting a prototype for the '53 wax wrappers and decided to use them once the orange/green wrappers were used?

The 3rd Beckett Guide has a picture of a '53 wrapper that is horizontal like the 52 but with the blue/red scheme. What I find when searching online is a vertically oriented blue/red '53 wrapper. I think it's possible that the horizontal blue/red wrapper may have been from the mythic sale of 52 high numbers in 53 packs but I need to get a bit more research done.