About a year and a half ago I posted on the 1967 Topps Giant Stand-ups. Well, a few things have happened since then that make this set worthy of revisiting.

The first thing that happened was that I managed to get ahold of an example for my slowly expanding Topps type collection. The next thing to happen was that an empty display box was found and auctioned last week at the National by Legendary Auctions and is purported to be the only one in existence: 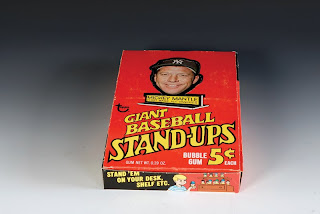 Yes, that is the Mick! Here is a side view: 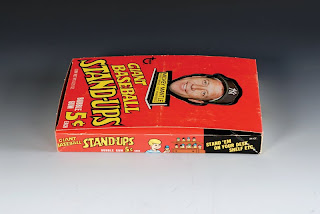 The other side is the same (like the bottom of the side) but the top if the side is different: 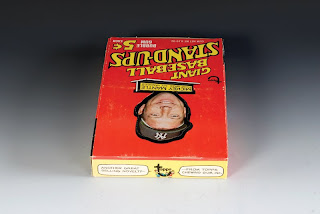 The back has the full ingredient list, Topps and copyright information and a product code, which brings us to the third newly learned thing: 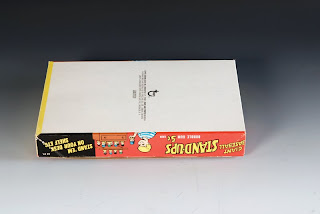 The auction description indicates the code has an "8" suffix so these were a 1968 issue (or were intended to be one) and not a '67! Something clearly went wrong as these are very, very hard cards to come by. I would rate them as harder than the 1968 3-D cards (of which more anon) but about as tough as the 1967 Discs, albeit in a photo finish. The 1968 Discs would be rarer by a fairly large margin though.

The box went for over ten grand-wow!
Posted by toppcat at 6:32 PM

The box was empty?, where did the cards go?. But if that is one of a kind now, it will have a high value. The box itself seems a card already lol pretty and informative.