Topps has a long history of issuing tattoos. One of their first issues was a tatoo set of general subjects that was issued in 1948-49 and reissued in 1953, simply called Tatoo Bubble Gum, aka Carnival on the display box. They followed this with numerous sets primarily based upon comic characters in the 50's and 60's before adding sports themed vegetable dyes to the mix. They continued into the 70's and 80's with these sets and for all I know still issue them today. I'll delve into the non-sports and non-baseball tattoos at a (much) later date as they have a convoluted history date-wise to say the least. Today I want to take a peek at the one cent baseball tattoos of the 1960's.

As their retail war with Fleer raged, Topps started issuing more and more sets as their coffers filled with the pennies and nickels of the baby boomers. 1960 really marks the beginning of a competitive period with Fleer and a few other confectioners such as Swell and Donruss that would last about a dozen years. The first stand-alone baseball set to be issued in four years by Topps was a series of 96 rather generic looking tattoos that sold for a penny.

There are fifty five players, sixteen team logos, ten autographs and fifteen plays depicted in muted colors, sold in a rather nice pack:

The tattoo itself was on the inner wrapper:

Here is a detailed, mirrored image to give you an idea of how it would look on your forearm, albeit blurry and washed out like we all remember: 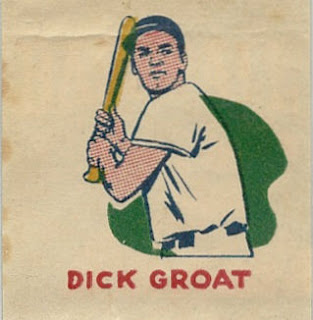 O-Pee-Chee, Topps' Canadian marketing partner, also issued the Tattoos in '60. Here is a sealed pack that will give you and idea of how these looked at retail: 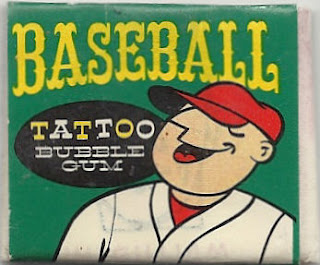 That's Jim Gilliam bleeding through by the way. The back was almost identical, with one small difference I will highlight in second: 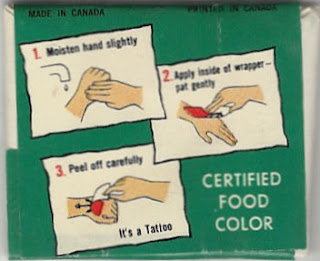 You can clearly see the Made in Canada and Printed in Canada declarations but here is a closeup:

Compare that to the US version:

It is said the OPC set mirrors the US one but I have never seen an actual checklist for the Canadian issue. Some information is available here on a fabulous O-Pee-Chee baseball site (click around and to-and-fro, there is a lot there) but there is no separate listing shown either so I'll believe it when I see it, as they say.

Topps issued another set (Baseball Photo Tatoo) in 1964 that featured much more realistic looking players. 55 players (with four variations as well) and 20 team logos make up a shorter but better looking set:

I'll post about the variations down the road as I need to assemble scans but Killebrew, Koufax, Mantle and Mays can be found two ways each. The tatoo has a lot more detail than four years prior:

Mirrored, you get this: 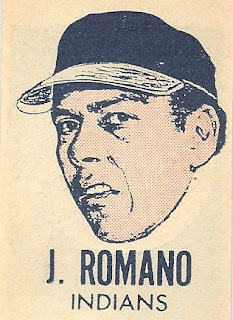 Some were a little more colorful:

That color is where the variations come in by the way and is tied in to the print runs, which vary depending upon the color of the wrapper. There are red and yellow wrappers in addition to the blue and players are not available in all colors from what I have seen, although some can be found with two. There was no corresponding Canadian issue in 1964.

The 1960 OPC's are by far the hardest to find and exist at a small fraction compared to the US version, which is also not easy. The 64's are the easiest to find in comparison. More on tattoos someday folks but a thorough review of the color schemes is in order first! I'll also have a pice on the 1971 Baseball Tattoos down the road as well but those are a different beast than these penny pack sets.
Posted by toppcat at 12:30 PM

I'm guessing the use of "Tatoo" instead of "Tattoo" was a way to differentiate between the two Topps issues...but that incorrect spelling of the 1964 set always seems worng to me.

I think in '64 it was to keep the word count the same as COLOR on the wrapper. They seem to have used the two spellings with no rhyme or reason for a pretty long stretch.