I was paging through the new Mile High Auction catalog last night and among the many droolworthy lots within, one of the most simple jumped out at me immediately. The subject of my focus? A mere empty Trading Card Guild box: 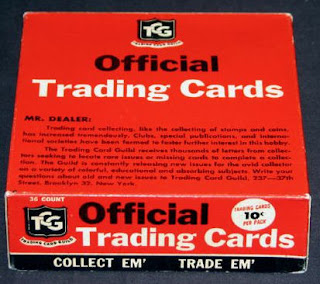 The auction detail indicates Topps Jets packs lurked within back in the day and while that is good and useful information, I was more taken in my the fact I could now legibly read the wording on the box top, to wit.

Trading card collecting, like the collecting of stamps and coins, has increased tremendously. Clubs, special publications and international societies have been formed to foster further interest in this hobby.

The Trading Card Guild receives thousands of letters from collectors seeking to locate rare issues or missing cards to complete a collection. The Guild is constant releasing new issues for the avid collector on a variety of colorful, educational and absorbing subjects. Write your questions about old an new issues to Trading Card Guild 237-37th Street, Brooklyn 32, New York.

Previous posts here on the Guild have detailed the ten cent price point used for its offerings. The boxes would contain cello type clear (or mostly) packaging, although dimensions and card counts per pack would vary issue-by-issue. Since ten cents was high for the day, Topps seems to have been inviting solicitations to purchase cards from them in the wording above from more affluent purchasers. This makes sense from a logical and financial standpoint If you had dimes to spend instead of pennies, you probably had more disposable income than the penny pack crowd. Bigger packs would also be an indicator of purchases intended to complete the set.

Now, the big question in all of this is: how did Topps plan to fill any orders for "odds", to use the international society vernacular, from those "thousands" of correspondents? Could this all be a precursor to Woody Gelman's Card Collector's Company? That is one intriguing question I hope to answer someday.
Posted by toppcat at 7:10 PM