Just got an e-mail from Jon over at the Fleer Sticker Project, the long-running comprehensive blog of Fleer oddities and the inspiration for my twice-weekly ruminations here. Jon was able to identify some additional poses in the 1960 Topps Football Tattoos that I wrote on a little while back. One was right under my nose actually (Colts), on a four tattoo strip I included as a scan originally: 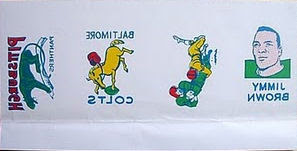 Jon has a lot of other cool scans and makes a compelling argument the football set count could be 96, which would match the number in the corresponding Baseball Tattoos from the same year. I won't rehash it here as his post is well worth a read (or two) and even better he has uncovered two proof sheet scans that have some unlisted poses and subjects but also show groupings of 32 tattoos per sheet. I think the 96 set count is likely but as with anything Topps, not with 100% conficence until the third proof sheet is found.

I say this because in the 1964 Baseball Tattoos there only 79 subjects are known (or at least checklisted), including four variations and the tatoos are the same size as those from 1960 and no changes have been noted to the checklist in years. 96 slots does not always equal 96 poses with Topps but Jon's argument is sound and I suspect he is correct.
Posted by toppcat at 1:57 PM