Friend o'the Archive Jeff Shepherd just passed along a link to a neat little item, namely a sash from a beauty contest that crowned "Miss Bazooka" he just won on the 'bay:

A little goggling reveals that Cindy Adams, an original gossip girl, once was crowned Miss Bazooka. Beauty contests were quite popular in the metro New York area (and pretty much any city) back when the Topps was ascendant and would have been a great publicity vehicle. One popular one in New York was Miss Rheingold: 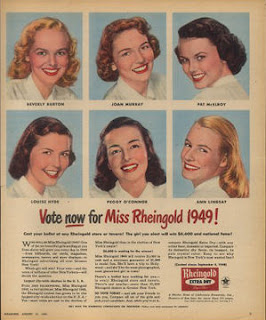 Ads for contests and pageants were often the subject of subway and bus ads back in the fab forties and fifties, not to mention the swingin' sixties. Ballots could appear in the local newspapers and maybe some magazines and of course at the counter of your favorite beverage supply shop in the case of Miss Rheingold. After some spirited voting a winner would be crowned and bestowed with a sash. I suspect the sash above comes from such an event, possibly in the sixties by the look and vibrancy of the fabric.
Posted by toppcat at 6:52 PM