Intermission time in a way today kids. A few of the mid 60's B&W TV sets do not fully fit into the somewhat generic template Topps was working from at the time. A couple of these sets share the default Topps block print with the Daniel Boone/Superman/Flash Gordon et al lineage but are not notoriously difficult or test issues. One however, is devilishly difficult. They also serve to show the big dividing line between the old and new Topps that is drawn between 1965 and 1966.

1965 is the year Topps moved its packaging and distribution to Duryea, Pennsylvania from their old Bush Terminal environs. While corporate offices would remain in Brooklyn and printing of virtually all sets was being done by Zabel Brothers of Philadelphia, the move to Duryea brought together farflung confectionery, packaging and shipping operations. Once Topps get settled in to their new digs it also seemed to free up the corporate imagination that led to a huge burst of innovative sets from 1966-71, far removed from the simple black and white TV stylings discussed in my last post. As the broadcast, cinematic and print worlds moved to color wholesale in 1966, so did Topps.

I'll go back in time a little form the end of the last post, to 1965's Gilligan's Island set: 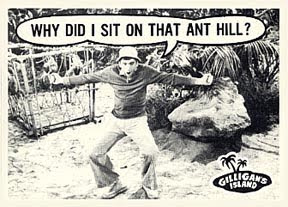 You can see some some of the basic "ready made" B&W TV elements are present: the little logo and the default block print. The style of the set though is very much in the You'll Die Laughing vein, where humorous captions are added to a production still. Gilligan was a full retail set, hard to find it top notch condition today due to the backs and it probably did not sell through its print run, but it was and is readily available. 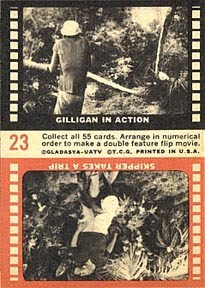 Designed to be fanned to show flip movies, these cards are often found creased in the middle today. As you can see though, the back is nothing like the ready made issues.

Another sold at retail set that also looks like it did not sell through is 1966's Lost In Space issue: 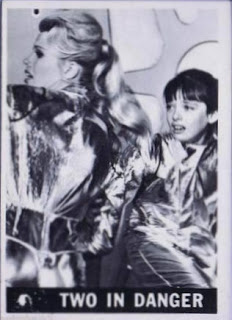 We have logo, black bar and inverted color default block print. The back is very much like the ready mades but with some really nice detail: 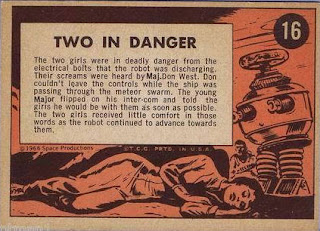 Looks like one of those lurid pulp magazine covers! Lost In Space's first season, 1965-66 was shot and shown in black and white, it went to color thereafter. I am of two minds on this set sometimes but it seems to follow the logical progression of the B&W TV sets.

Fear not, curiosity seekers, there is still an ultra tough test issue out there that falls back on some of the ready made template, the extremely tough 1966 Flipper test set: 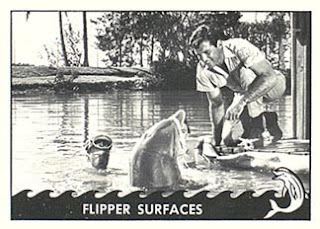 Unlike our other entries here, Flipper was always filmed in color, so we have a reverse of the Beverly Hillbillies situation! The reverse though, is more Gilligan-y: 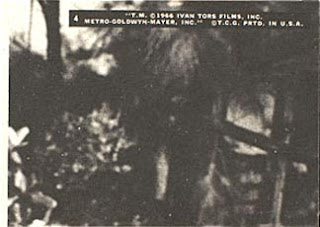 Flipper, a scant 30 cards in number, is an almost impossible set - up there with the rarest Topps cards and I question if it was even tested. It was likely abandoned in the final stages and a product called Flipper's Magic Fish, originally slated as an insert for the Flipper cards as shown by this box proof, was jury-rigged to stand in its place: 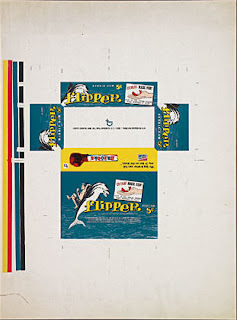 The Magic Fish were "wigglies" and should be considered toys as issued; had they been inserts then they would be considered "cards" I imagine. I cannot find any good scans of these elsuive fish and will save an in depth look at them (and indeed any of the sets discussed in this series of posts) at a later date.

1966 also saw a Topps set that perfectly married the old and the new in promoting Get Smart, a very popular show that exploited the James Bond craze. The cards were actually small, almost square and sold as panels of two: 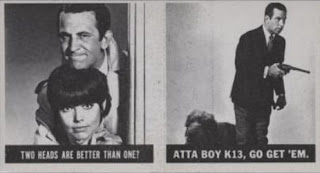 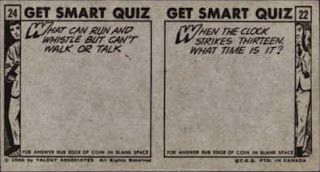 The big surprise with the Get Smart set though, was the inclusion of an insert, still something of a rarity with Topps' non sports cards. Sixteen Secret Agent Kits were issued in the packs as well, all in glorious color: 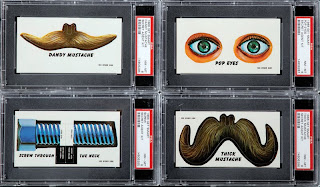 Topps was starting to face pressure from Fleer, Philadelphia Gum, Donruss and even Leaf in the TV show licensing game during the mid 60's and they turned to the tried and true gimmick of the insert card. Only the pilot episode of the show, which aired on September 18, 1965 was shot in B&W so Topps may have felt they needed a big splash of color on the Secret Agent Kits to compensate.

Some very strange sets remain to be looked before the decade is rounded out-stay tuned!
Posted by toppcat at 11:42 AM