The first modern inserts in baseball packs came not from Topps but rather from their arch rival Fleer, in 1960, although the Fleer issue that contained them was not contemporary but consisted of all time greats and the like. Topps did follow suit later that year by including a series of metallic looking football stickers in the fall's football card packs (see also the the Fleer Sticker Project's overview here) but it wasn't until 1961 that they issued their first baseball insert sets.

The 1960 Fleer effort (cards and inserts both) was somewhat austere and only included team logos for the sixteen extant teams that year. A year later Topps had two different inserts: an elaborate series of 208 drab stamps and a fun, colorful 36 subject ruboff insert. The stamps will be addressed here at a later date; today's quarry is the fun one.

Since they were ruboffs, the image on the paper thin, serrated insert was reversed: 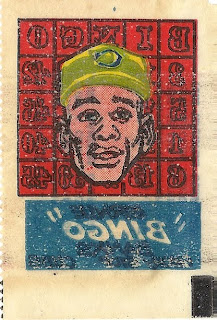 Here is a mirrored image of Banks: 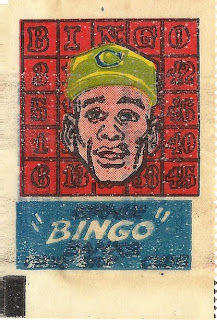 You can see the nickname of Bingo, which illustrates the main theme of the set: amusing nicknames. Of the 18 players included (one per team), all but one had a nickname inserted between his first and last name. The odd man out was Yogi Berra, who apparently was so well known by this time that his given name of Lawrence was ignored. I'll bet they could have ignored his last name too!

Those little black blocks I believe were used by an optical, semi-automated cutting machine. The machine was imperfect, sometimes wildly so.

The instructions on the reverse were to the point: 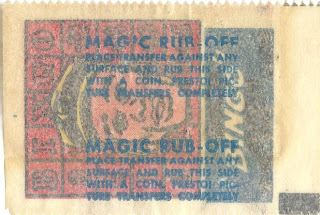 The team ruboffs had stylized designs, as you can see here despite the out-of-register blue process dye: 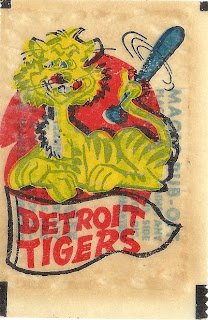 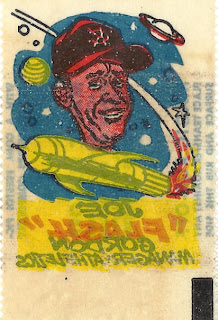 As you can see above, miscuts were common. I see however, the graceful hand of Jack Davis in some of the artwork. He did some projects for Topps in the 60's and the illustrations mostly look like his work to my eyes.

The wrapper in 1961 came two ways, one type advertised the stamps: 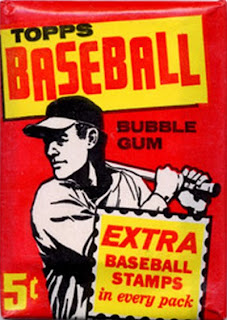 The other flavor of wrapper was non-specific about the ruboff that lurked within: 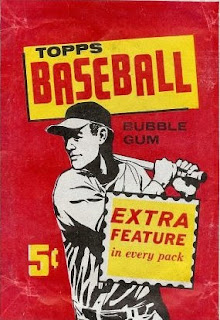 Penny packs were immune from inserts and it appears not even the cellos had an insert inside in '61. I believe the stamps were issued first based upon such a timeline in 1962, when another stamp set was issued. The ruboffs likely started around series four.

They are a neat little set that, based upon what is happening to my little pieces of paper, look like they might disintegrate someday, alas!
Posted by toppcat at 6:12 PM