I'm going to try and post a midweek entry every Wednesday for the duration of our Spring of Discontent. Everybody can use a little distraction I'm sure.

Topps went all out in 1964 with the Major League All Star Game being played at brand spanking new Shea Stadium, right next door to the World's Fair (which I attended as a wee lad). In addition to innovative bright red packaging for the ten cent cello Baseball packs (with two coins no less) in '64, they issued two extensive and well thought out "extra" sets: Baseball Stand Ups and Giant-Size Baseball All-Stars (the latter colloquially referred to in the hobby as Giants), the latter of which came out after and referenced events from the All Star Game which was held on July 7. The Giants had three players per team represented within, some of whom were not necessarily participants in any All Star Game ever but Topps has always made some curious choices with their secondary sets. There was also a Photo Tattoo offering in '64, which was standard fare and likely not issued due to the local presence of the ASG.

The Giants are one of the nicest sets ever issued by Topps in my opinion and I know a lot of hobbyists concur. They are also available to this day in abundance.  There was a massive 70's west coast find of these and I believe a couple of notable east coast dealers had hoards as well.  I have read of attempted sales of these at several ballparks (Dodger Stadium sold packs of 25 through the mid 70's) and imagine the World's Fair concessionaires got a crack at them too but the set came out sometime in August and just didn't sell. Topps did a massive overstock dump for sure and I've seen reference to colossal amounts of these being essentially given away by them for what amounted to freight costs.

Here's a Baseball Card News article from January 1986 that succinctly sums up the state of play at the time: 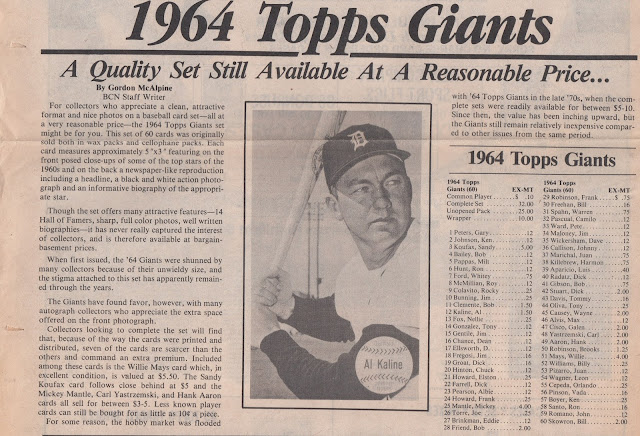 You will note the mention of seven short prints that are seemingly not as abundant as the other 53 subjects:

All well and good I suppose but here is an uncut sheet (likely complete despite appearances to the contrary) from an old Huggins & Scott auction and it has 49 short prints out of 72 slots on the array: 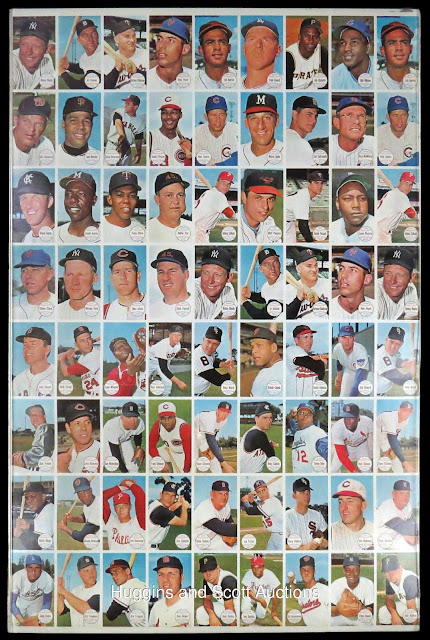 Yes, there are three Mantle's visible and that is important because if you look at the other seven cards below him on the left edge of the sheet, they represent the "short printed" subjects,which are no lesser in printed number than 42 other players.  They are instead "edge" prints and with three Mantles on the sheet, he doesn't feature as an SP. Topps must have had major issues with that left side edge when cutting these. The Koufax is a toughie in nice shape but based upon the PSA population report he is not the hardest subject in top grade-that would be Bill Skowron.  Check out these PSA 9 and 10 numbers for the SP's:

UPDATE 5/29/20: I just realized I left out a whole paragraph on the Double Prints-yikes:


The fifth and ninth columns repeat as do the players in the three slots to the right of the Mantle cards in the first and fifth columns. So the Double Prints are as follows:

Friend o'the Archive Roy Carlson (you will be seeing quite a bit of stuff from him going forward on these Wednesday posts) sent along this key bit of Topps internal messaging that shows the dire sales of the set: 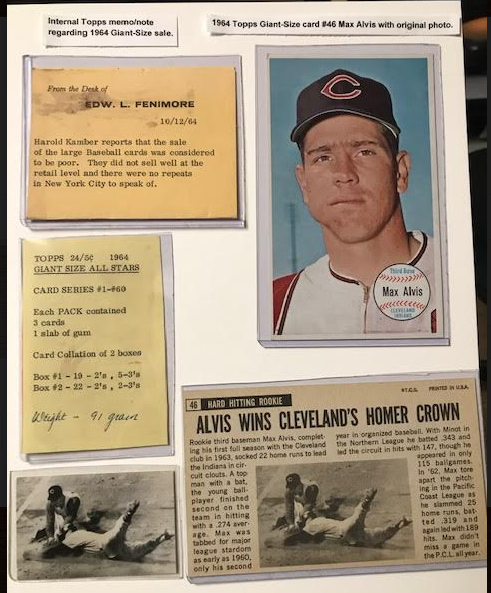 The collation summary above was for five cent packs; a ten cent cello version may also have been configured but I can't really find anything on that and I think there may have instead been a cello version of the five cent pack. I would have to think vending boxes were made up as well, maybe to suck up whatever oxygen was left by the last gasp of the Exhibit Supply Company.

Look at this, a Heritage Auctions offering of a wax pack first, then a shot of a slight variant from the Lifetime Topps Project blog: 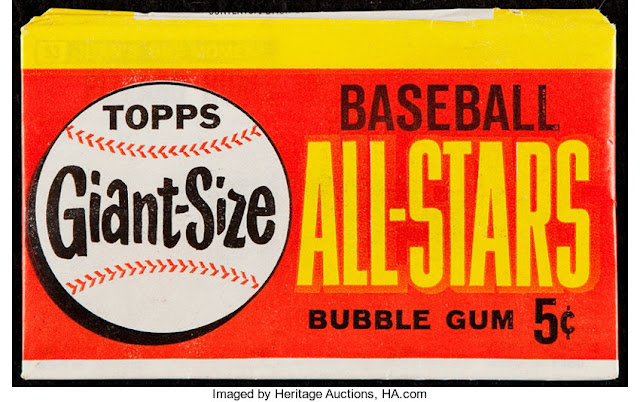 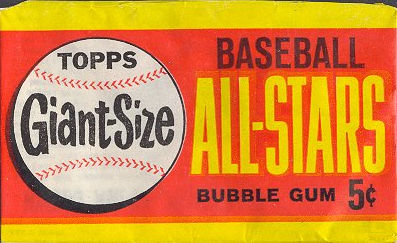 It does not seem like cello packs exist and Anthony Nex, a pack guru of utmost repute, has never seen one. Here is a regular 64 cello, not sure if it ever got mistaken as a Giant Size pack: 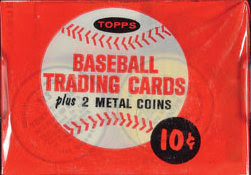 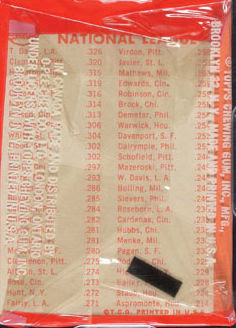 Two boxes of Giants did not come close to yielding a full set of 60 according to their own notes, no surprise as this was typical Topps collation at the time for most of their sets and you only got three of these big boys at a clip.  Great set, lousy sales!
Posted by toppcat at 8:00 PM

In the mid 70"s I picked up two sets from a hobby dealer and don't think they were any more than five bucks a set. Seemed very plentiful and cheap until the 80"s card boom.

Yeah, even in the 80s I was able to pick up a bunch of these including Mantle and other HOFers at very reasonable prices. One of my favorite sets.

Great post, thanks for the info. I recently decided to work towards a set of these. I was able to pick up a lot of just over half of them from a guy on Facebook. I still need the 7 SPs and just under 20 others. I think it is a beautiful set and I am looking forward to building it.