Happy Hump Day folks!  Today's midweek peek features the 1974 Topps Baseball set-- and I do mean "set" --as Sleuth o'the Archive Roy Carlson has sent along his findings after a neat bit of detective work involving two players who were traded for each other on November 7, 1973: Glenn Beckert and Jerry Morales.

This Cubs-Padres trade was, I'm sure, quite a big deal in Chicago and certainly less so in San Diego. Beckert was the Keystone part of a longstanding Double Play combo with Shortstop Don Kessinger for the Baby Bruins, although he was at the tail end of his career at the time the trade was made. Morales was more of an up-and-comer for the Padres, a corner outfielder with enough speed to sometimes get the nod in center but essentially a replacement level ballplayer as it turned out.

As we all know, 1974 brought some uncertainty to the Padres franchise and a planned sale and move to the nation's capital began a slow and tortured path in April of '73, as DC area supermarket mogul and prospective Owner Joseph Danzansky became embroiled in various lawsuits, ultimately resulting in Ray Kroc--of McDonald's infamy--becoming the new owner on January 25, 1974 and allowing the team to stay in America's Finest City after coughing up what was then a whopping $12 Million.

Things got so far as a potential new name: the Stars, although Nationals (a keeper methinks) and Pandas also were being bandied, the latter due to the recent arrival at the National Zoo of Hsing-Hsing and Ling-Ling, two Giant Pandas sent by China as a thank you gift to the United States as the result of a diplomatic thaw.  I was a ten year old lad when they arrived on our shores in 1972 and can tell you they were a major story and attraction at the time and for several years thereafter.  A prototype Stars road uniform was even created and modeled by Pitcher Dave Freisleben (he of the three variations in the '74 set) and you can get the vibe from the cap: 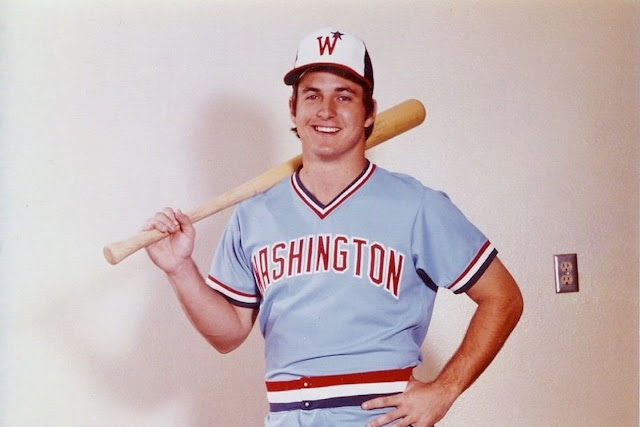 Nothing says class like having an electrical outlet in your promo shot, but I digress. Topps, of course, printed up about half the 1974 set with Washington "Nat'l Lea." showing as the team name for Washington before correcting things back to the San Diego Padres and allowing 15 variations to live on as a result (16 if you count the two varieties of the aforementioned Freisleben rookie card's font variation on the Padres version of card #599). Considering the NL Owners had approved the DC move on December 6, 1973 and Kroc ended up buying the team a mere six weeks later, you can see how Topps would have been embroiled with the Padres/Washington NL card changes. 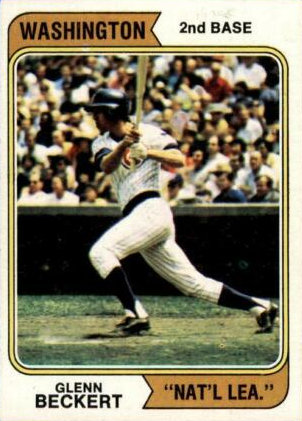 You will note that despite the rewrite of the franchise information, Beckert is still in his Cubs togs on the corrected card: 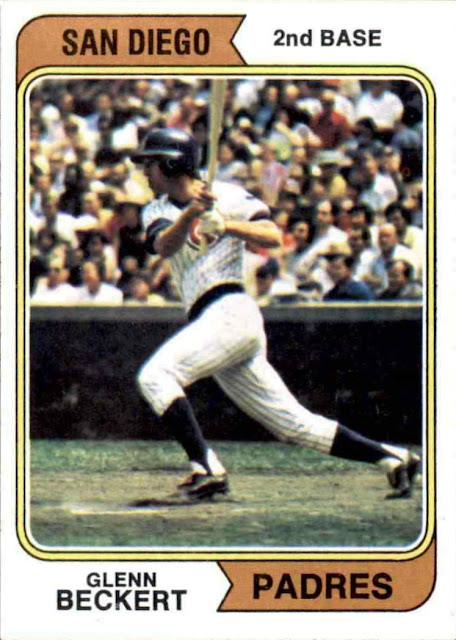 It was easier to change text than a photo but putting that aside, unless they had a good head shot on file, there's no way they could have gotten a picture of Beckert in a Padres uniform in time to further update the corrected card.

Morales had a similar name/uniform mismatch in the other direction: 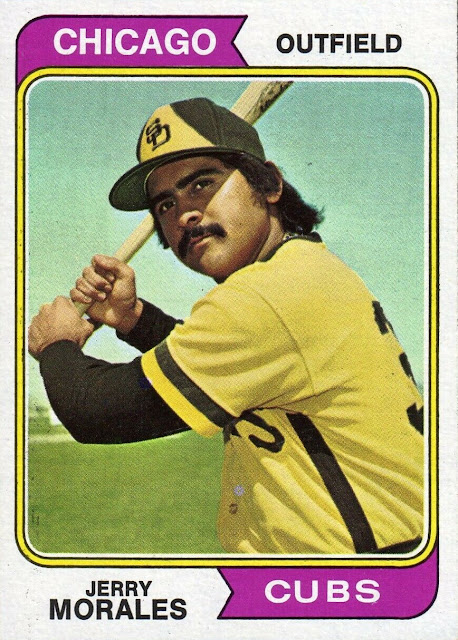 Now the reason I am dragging you down this particular garden path is that on the retail and full set boxes, whether through fate, serendipity or dumb luck, both players are featured on the graphics but on their pre-trade teams.  Here's Beckert, in splitsville so to speak (all scans hereafter are courtesy of Roy Carlson): 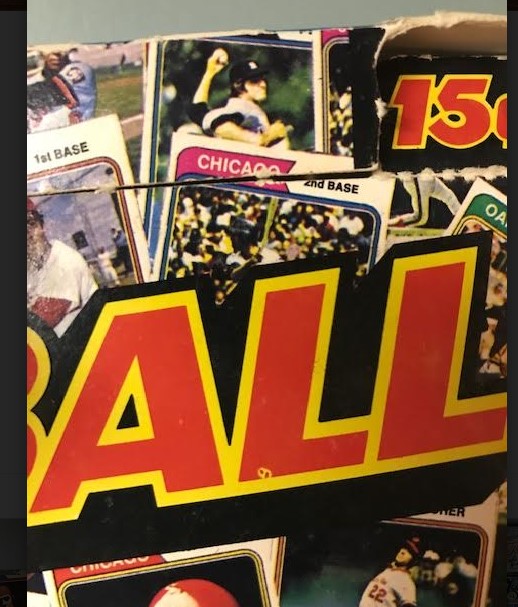 Morales is in the mix too: 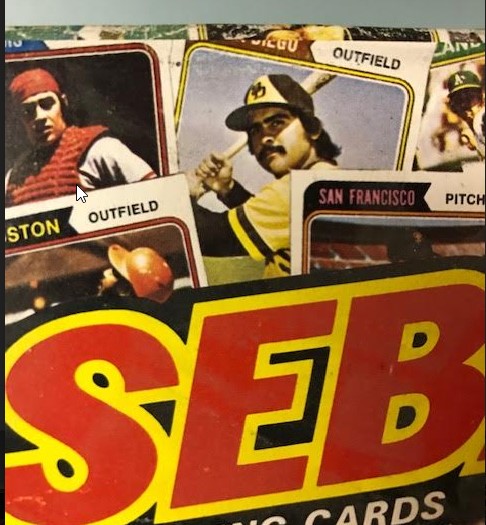 In addition to the much more pleasing color coordination, you get a look at what must have been proofs of Beckert and Morales. and, I assume, all the other cards shown as well).  I imagine Topps could have updated the graphics but it seems like a classic "why bother" scenario, as you could not see their given or team names on the boxes.

Topps also went from a ten to fifteen cent pack at some point in 1974, the latter price point a significant departure from the practice of having their wee consumers pay no more than a penny per card, which had been in place since 1948 but was impossible to maintain post 1973 Suez oil crisis. (UPDATE: It does appear ten cent packs held eight cards only, plus a team checklist in some instances-thanks to gogosox60 and John Moran for that tidbit).

Here's all three boxes with the aforementioned graphics: 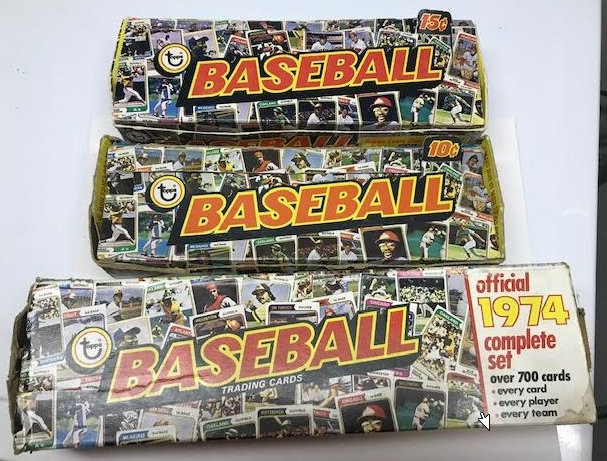 And the all important indicia: 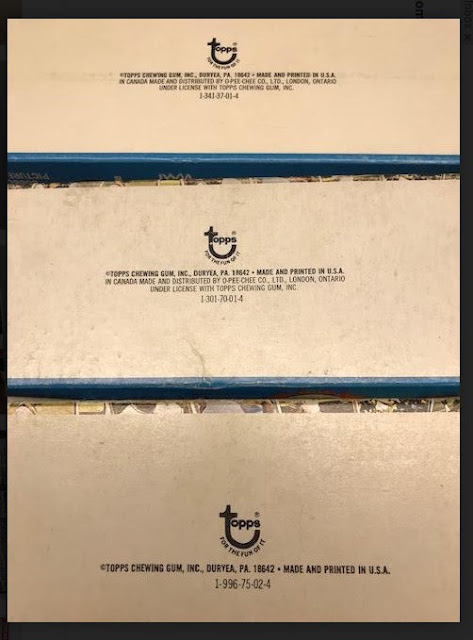 Topps had a lot going in in 1974 for what was their first year of true "all 660" packaging, so it's understandable not everything was worth changing.  They came up with the idea of a "separate' set of Traded cards in '74 and then for some odd reason not bothering with such a thing in 1975 before they ran it back up the flagpole in '76.  That was it for being up to date until the boxed 1981 Update set was released to much criticism (due to no retail option) five years later.
Posted by toppcat at 12:00 PM

We were blessed with the 10 cent 8 card packs in the Chicago area!

The 1974 stamps were evidently issued in-between some of the trades. It reflects the Reggie Smith trade but not the Beckert or Randy Hundley trades.

What's so "infamous" about McDonalds?

Another thing on the Morales card - the team colors are wrong on the border for some reason.