A few weeks ago I posted some Topps Football Salesman Samples and a comment thereon marveled at the 1963 example shown, which had a purple background variation along with two "normal" blue backgrounds.  I don't collect the 1963 Football set and am unfamiliar with the variations for the most part, so I thought I'd try to gather what information I could find about the them and the set itself here in a simple, easy (LOL) to read post.  To refresh your memory (and mine) this was the '63 sample:

Blue, blue, purple-easy enough, right?  Well, not exactly....especially after reading this ur-variation article: click over for a well researched piece.  It's from an older, albeit oft-linked site and it notes the lesser known green background variants as well.

I've nicked the above scan from the linked site (rbwoodenpuzzles.com) or "rb" merely for reference purposes but you can see purple on the left-most card and (over-saturated) green on the right-most in the Nomellini card backgrounds.  The green variations seem to have been done to correct for very drab looking grass and trees in many cases. The salesmen sample I showed in my original post and above is also referenced over at "rb" so it's been known for a while (2014 at least).  This is all starting to remind me of the 1962 Baseball green tint variations!

PSA has a nice article on the set as well and notes the 116 purple background varieties, although I think "rb" has 115.  I am not sure if all the green variations have been counted anywhere but there are a fair number of them. Neither color variant seems to follow the Topps "rule of 11" and as "rb" notes, they were changed at the lithographic level.

The set is 170 cards in length, which is an odd total in Topps-land and Mike Thomas's Vintage Football Card Gallery has a nice "reconstruction" project covering the sheet arrays.  Here is sheet #1 via Mr. Thomas, which is reproduced from an actual half sheet that doesn't display too well: 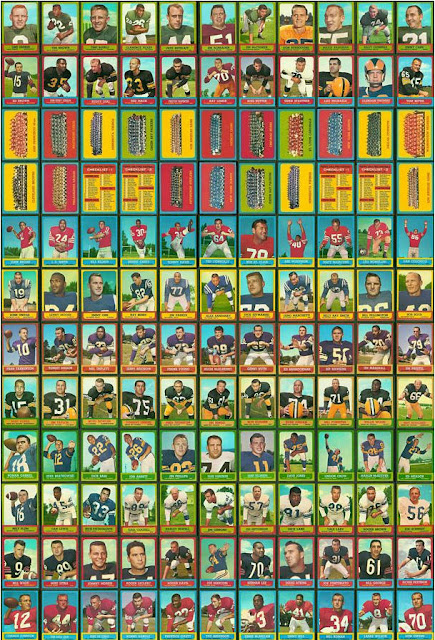 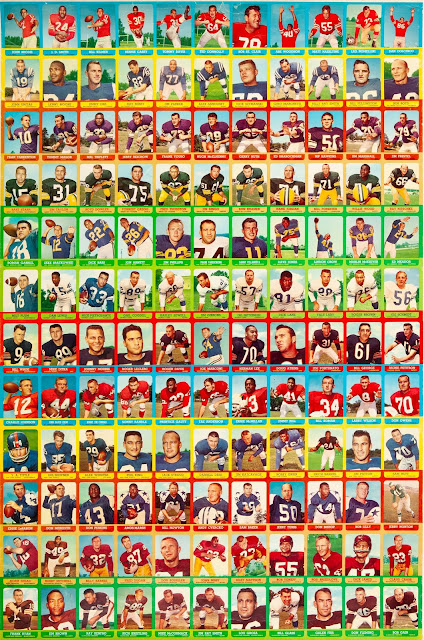 I'll get into the print arrays momentarily but first here is a nice Cardboard Connection capsule summary of the set.  The first sheet is quite interesting to me; it shows how Topps was locked into a format of 11 players and a team card per franchise, so adding additional subjects to bring the total to a more "elegant" and somewhat normal 176 (ideally 98 cards on one sheet plus next series checklist + 76 cards on the second with a DP checklist) could not have been done unless they broke the pattern (or issued non-single player cards like they did with Baseball for several years). Topps was team-centric in football for many years prior, perhaps due to the nature of its deal with the NFL. Here is the array for the first sheet which is easy to digest, as each row, excepting rows 3 and 4, contains all 11 player cards of a specific team:
1 Eagles
2 Steelers
3 Team Cards
4 Team Cards-Checklists
5 49'ers
6 Colts
7 Vikings
8 Packers
9 Rams
10 Lions
11 Bears
12 Cardinals
You will see both checklists (nos. 85 & 170) appear twice in the fourth row.  In addition, the team cards of the Rams (#48), Giants (#60), Packers (#97) and Vikings (#109) repeat from the third row as well.  The ten other team cards appear only once between both rows so we get a first sheet count of:
110 Players
10 Single Print Team Cards
8 Double Print Team Cards
4 Checklist Cards
----
132 Cards
The second sheet has the following row array:
1 49'ers
2 Colts
3 Vikings
4 Packers
5 Rams
6 Lions
7 Bears
8 Cardinals
9 Giants
10 Cowboys
11 Redskins
12 Browns
The last first two rows for the first sheet and the last four rows of the second contain the single printed cards.  Adding in the ten single printed team cards there are 76 short prints in the set.  If issued in two waves then I tend to think there were two identical half sheets made up for each.  If released all at once, each half sheet may just have been different from the other.
It's worth noting the season-long suspensions of Alex Karras and Paul Horning on April 17, 1963 for gambling at this point in the discussion.  The Lions cards ran from #25-35 with the team card clocking in at #36.  Karras, however, was not a guaranteed appearance in a Topps NFL set at the time.  He was not in their 1960 set after his cardboard debut a year prior and even star defensive players often got left out of the shorter Topps sets.  While he made it in 1961 and 1962, Topps lost the NFL contract to Philadephia Gum in 1964 but Karras doesn't appear in any of their sets either until 1966 and then is a miss in 1967.  He then re-appears in 1968 with Topps.  So he's in no mainstream sets from 1963-65 and therefore may not have been in the plans for Topps in 1963.

Hornung on the other hand, was a star offensive player (one of the biggest) and it's interesting to me that card #85, which theoretically would have kicked off the Packers numbering run, instead was assigned to the first checklist card.

So my question is this: were the Packers supposed to have Paul Hornung included? Furthermore, was "series 1" supposed to end at #84, preserving the 11 player + "following" team card formula, where the team card was always divible by 12?  We'll never know but it certainly seems possible.
Posted by toppcat at 8:00 AM

The Karras and defense players makes sense and so does the Hornung theory. Paul did have a down year in 1962, but so did Frank Gifford and he did not make the set either.