A couple of posts ago I delved into the early history of the Shorin family and American Leaf Tobacco Company (ALTC) as a followup to my article in Wrapper #257. Therein I mentioned that in addition to the more well known ALTC, the Shorin's also owned a chain of gas stations in Brooklyn in a period roughly spanning the Depression. The chain was called American Gas Stations and the company was founded in 1928.

American Gas Stations (AGS) may have had the financial backing of Morris Shorin but it appears his youngest son, Joseph, who would have been about 25 at the time, was in charge. Joseph Shorin would eventually end up being President of Topps Chewing Gum but he had the benefit of the decade he spent running AGS to draw upon. Joe Shorin graduated with a degree in Business Administration from New York University in 1925 and attended St. Lawrence Law School, which despite the Canadian sounding name had a branch in Brooklyn at the time.

Information on the company is scant but I suspect it was set up as a partnership. The first location may have been a couple of blocks north of Ebbets Field at 1619 Bedford Avenue in Brooklyn, which ended up as the eventual headquarters of the whole operation. Here is a matchbook showing their logo and some gas station addresses: 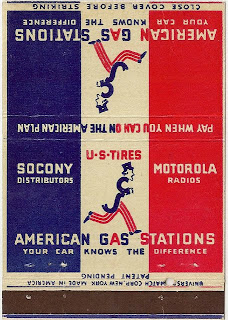 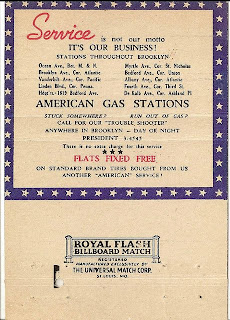 I've never been able to find an American Leaf Tobacco Company logo but wonder if it had the same red, white and blue color scheme. It would make sense.I'll get to the locations in a minute but take a look at the logo first, which is highly stylized and slyly incorporates the initials of the firm: 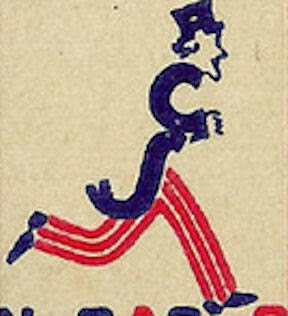 I was able to determine two of the locations shown on the back of the matchbook were purchased in early February of 1938 by AGS. By the time Joe Shorin sold the company to Socony-Vacuum (later Mobil) in 1939 they had seventeen stations so they were snapping up locations at a pretty good clip in '38. I am still doing research but the sale of AGS seems to have been initiated by Socony-Vacuum.

The American Leaf Tobacco Company was sold just prior to AGS I believe and while I do have some details on why I think ALTC was sold and did not wither away in the depths of the Depression, I will save those comments for another time.

Joe Shorin was knocking down whatever existed when he purchased his properties for AGS and building a distinctive style of building for each station; red brick with white trim was the color scheme and I have to think a touch of blue would have shown up somewhere in the design. I am told they were quite easy to spot back in the day. One AGS station still remains, at 1815 Ocean Avenue between Avenues M and N, although it has been painted over and is now called Tomat Service Center (NOTE 11/19/12-it appears to have been torn down and replaced with a Sunoco storefront):

More pre history of Topps to come folks!
Posted by toppcat at 6:57 AM