A Recount Is In Order

Following the solution of the 1967 Topps Baseball Punchouts player distribution a little while back, I have been pondering from time to time the prior year's set of uber-rare Punchboard prototypes. Given how the positional array of players in 1967 was so minutely worked out before fate intervened in the form of some interleague trades, it occured to me that 1966 might exhibit the same characteristics.

To refresh your memory, the 66's looked like this: 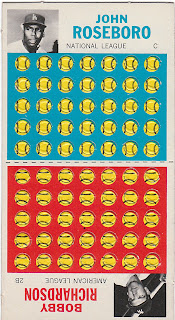 Each two player panel had nubs at various points, showing where they were attached to each other just before being separated at the factory. You can see two above Roseboro if you look closely. I did an analysis of these based upon the location of the nubs on each card and came up with a basic array that looked like this for the 14 known cards:

Those 5 in the lower right could be picking up some that should have been in the upper left corner (inverted, in other words) , which I noted in my original post. I suspect now that was the case as no other position has more than three cards showing. Let's come back to that momentarily.

The positional analysis, which was key in deciphering the 1967's, may also apply in 1966. Here is the array of known positions (2 players per card):


Excepting the outfielders, no more than two positions per league exist. Since the 67's counted each OF position separately, despite not identifying who played left, center or right, the number of outfielders were triple that of any other position on the diamond (five players per position, per league). If that applies in 1966 and we assume the two per position theory holds, then there should be six outfielders per league. Therefore, we are missing an AL catcher, two NL second baseman, third and short from the AL , two NL outfielders and one from the AL. That's eight holes, which fit on four full cards. Adding it all up (2 players known on 14 cards) yields 36 players on 18 cards.

If you look at the "nub array" and assume each place on it holds three cards (signaling three small sheets of six each) then you get 18 cards. All conjecture but based upon the 67's, I think it possible the final count of cards in this set will be prove to be 18 someday. Now, who are the eight men out.......
Posted by toppcat at 3:01 PM