So I got this innocuous e-mail yesterday from friend o'the archive and online buddy Shane Hardie, asking me to take a look at some 1960 Topps Baseball Tattoo scans. That was about six hours ago and I lost Saturday afternoon to the quest!

Long story short, Shane has a theory that the little rips that appear at the top of each tattoo were not the result of the pack being opened but rather a production mark. Here is a closeup:

Shane noticed that when you looked at an unopened tattoo that the rip was already in place and neatly hidden by a flap of the wrapper from the other end when folded on the production line. Well, I happen to have a few pieces of unopened Topps gum from 1946 in my collection and I poked out the foil wrapped gum on a piece of Peppermint

and could see a little rip on the interior of the wrapper, covered by the flap from the other end. I then opened a piece of Spearmint

and observed the same thing. Here is the Spearmint from the other side: 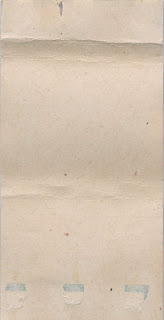 My first thought was that the little rip was caused when the wrappers were cut by Topps on the production line but a closer look revealed the foil wrapped gum tab had a corresponding notch in the same location on the Peppermint: 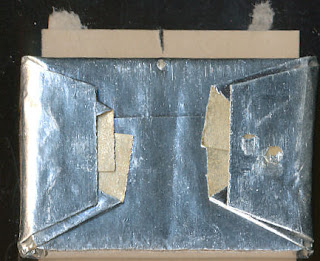 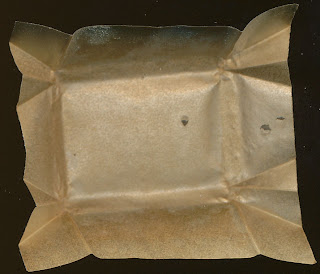 It's hard to see but it's there. It's also on the Spearmint tab but much fainter and it does not present well so I've left it out of the pictures here. It's impossible to make it show up on a scan but the gum tab also had a slight depression in the same spot. Here is some 65 year old gum for your viewing pleasure: 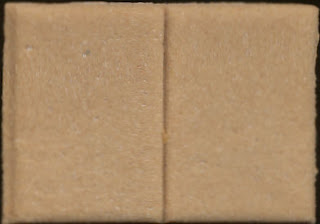 I was tempted to chew it but thought better of it. The score line actually appears just to the right of the rip on the example above (where the foil is still folded). I suspect it was the result of a pin holding the wrapped tab down to secure it before gluing.

Other wrappers share the rip as well. here is a 1949 Stop n Go pack that held a license plate card: 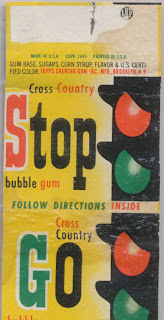 There's another goodie on the flap, I'll get into it next time. Here's a couple from Chris Benjamin's Non Sport Guide: 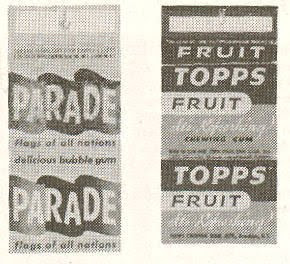 To top it off, here is an OPC Football Tattoo from 1960, also with the rip: 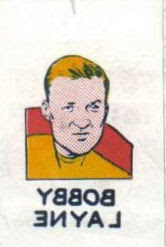 That would mean that Topps either imported the Football Tattoos into Canada or that O-Pee-Chee used the same equipment as Topps.

I think Shane is right-the rip is the result of the production process and not caused by the opening of the pack. Topps used the same equipment for a long time it seems; here is a 1939 wrapper with the same rip, sent to me by friend o'the archive Jeff Shepherd:

That one is pretty pronounced and you can see the white area where the glue must have gone to seal the flap on top of it. The 1964 Baseball Tattoos also have this rip:

I can't find any scans at the moment but Topps last penny tattoo issues in this style were 1967's Dr. Doolittle and Comic Book Tattoos, although they issued a non-tattoo product the following year called Magic Funny Fortunes. I'll try to see if those have the rips; if they do it mean Topps might have used the same packaging equipment for thirty years! In 1969 Topps went to an accordion style tattoo sheet that sold for a dime so maybe that's when they upgraded their machinery, although one would think the 1966 move to Duryea, PA would have resulted in gleaming new production equipment.

I wonder if this post will cause a "flap" over the rips?
Posted by toppcat at 5:16 PM

Thanks for your expert opinion. I'm glad we agree on that. Maybe we can get some people to notice this and maybe it will make the "rip" more acceptable since virtually everyone will have the rip.

The 1960 Superman Tattoo wrappers have a similar notch.