I don't even know where to begin with today's entry. In 1970 Topps issued a set of small, plastic toys called Mini Model Cars: 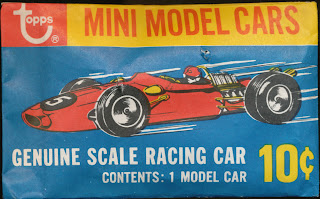 According to Chris Benjamin's Sport Americana Price Guide to the Non-Sports Cards Number 4, there are twelve cars in a complete set but I frankly have no idea if that is true. The back of the pack shows what was in store for the lucky purchaser: 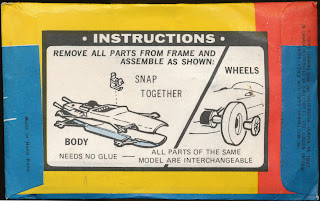 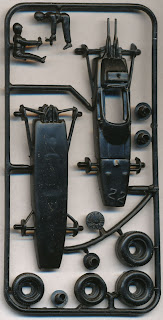 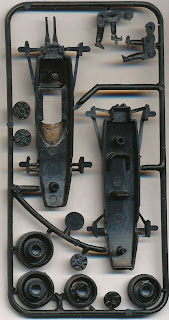 That windshield is not brown but rather has a weird translucence like certain areas of the 1968 Baseball Plaks. Unlike the Plaks though, which were fairly thick, the model cars are made of flimsier material. This particular model has number 22 on the hood: 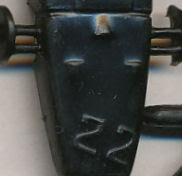 The cars came packaged with a very thin insert card, or rather one of two types of insert cards. The cards that make sense are called Racing Track Cards: 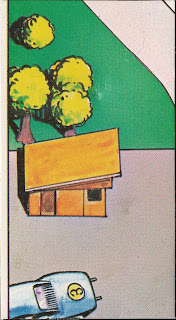 The back indicates 21 were in the set and obviously they made up a race track for your mini cars: 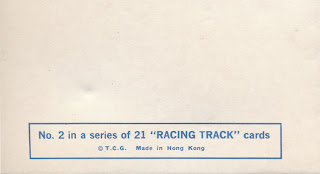 The cards are oddly sized at 2" x 3 5/8". You can see one of the two dimples on the card (caused by the main body pieces of the model) in the back scan. The box advertised the fact you could make a starting grid, as Topps put it: 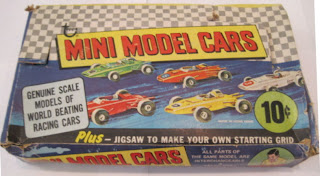 Here is a full box flat from the wonderful norman-saunders.com site: 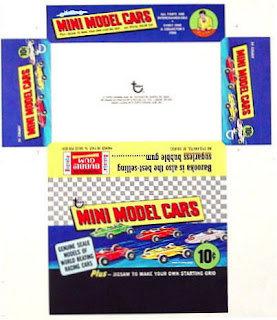 Here is an interior shot of a box from an Ebay auction a while back: 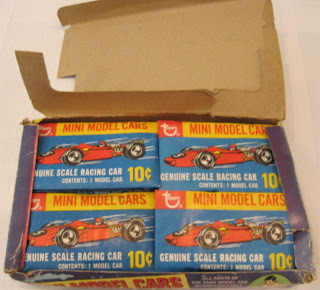 Now, the weirdest part of this whole thing though is that certain packs held something called Soda Fountain Car cards. The only place I have ever seen a picture of them is from the aforementioned Sport Americana Price Guide to the Non-Sports Cards Number 4 by Chris Benjamin: 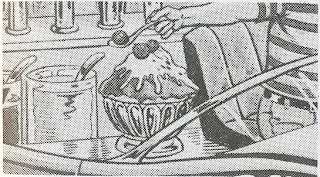 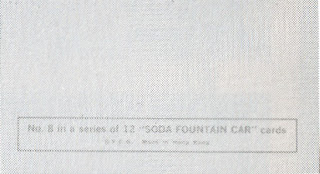 Twelve in number, the card front would have been in color. If you take the 21 Racing Track cards and add them to the 12 Soda Fountain Car cards you get 33, which is a total used by Topps quite a bit for their insert and oddball sets and is divisible by that favorite Topps number, 11. Why Topps had such strange cards as inserts beats me; it seems there was to be a set of soda-fountain cars issued as well that was scrapped. It looks like the kid in the above scan has an ice cream sundae on the seat next to him and they are both situated behind a windshield.

The mind reels at what those would have looked like in plastic form or why they even were contemplated. The only thing I can think of is that the Brooklyn property the Shorin's once lived on around the turn of the century (that's the 19th century turning over folks) when the four eventual Topps founders would have been very young, featured a converted saloon that was, yup, a soda fountain. Other than that, I have no idea what was going on.
Posted by toppcat at 7:21 PM

I remember these quite well. I bought quite a few from the ice cream truck back in 72-74.

The cars came in different colors, as I remember getting a color rather than a particular car as being what was important.

The cars were ok to look at but came apart easily, so pieces were quickly lost...until the ice cream truck came back & you bought another!