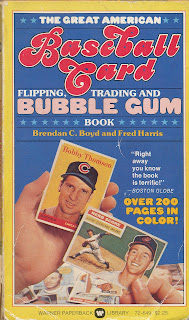 this morning and noted a comment by Sy Berger that he had been originally hired by Topps to run a special promotion. Well, I said to myself "Self, it would be a fine thing to find out what that contest was." As it turns out, I already knew the answer but didn't realize it.

Friend o'the Archive Jeff Shepherd regularly sends along batches of scans for me to peruse. They are quite useful in researching the early history of the company and in addition to being fun to read are great fodder for illustrating blog posts here. Shep had already sent me a letter that revealed the answer: 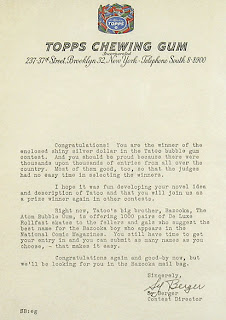 Sadly the letter is undated but Sy Berger is clearly shown as the Contest Director for a promotion where a silver dollar was awarded to the winners of a contest relating to Tatoo Bubble Gum. It's hard to be sure but it looks like the contest involved sending in suggestions for the next series of Tatoos. A separate contest for Bazooka is noted in the letter and names were being solicited for a mascot. I believe the winning name was Bazooka, the Atom Bubble Boy. 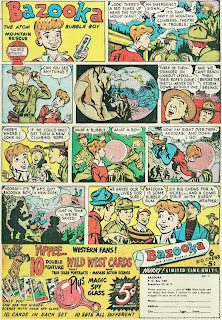 Bazooka Joe was still a good half-decade off. That scan is from the awesome Comic Book Hall of Fame site. 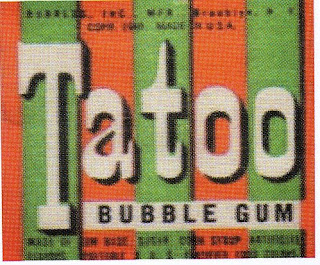 (From Non-Sports Archive by Adam Tucker)

Tatoo may have been the first Topps penny gum product sold with a novelty and designed for kids-Bazooka was originally a five cent confection. First issued in 1948, it was reissued in 1949 and again in 1953; packaging differs slightly among the three. The first run in 1948 purportedly had 100 different subjects and came in an innovative package called a tourist pouch (color scan needed, big time). The ins and outs of these sets are for another day's post though; it gets complicated. Here is some original artwork from the set for a Buck Rogers inspired tatoo:

There would have been some color added to the final tatoo. I'll get some scans together and do a full writeup on these someday. As for Sy Berger, I think the contest went well, since he spent the next 50 years working for Topps!
Posted by toppcat at 6:06 PM