Quality Was Job One

Seeing how I showed a slew of old Topps gum scans from the 30's and 40's last time out (wrappers and yes, gum) , I feel it's time to share two scans sent by friend o'the archive Jeff Shepherd that give a glimpse as to how Topps marketed their products in the very early days. Topps upper management, which was dominated by the Shorin brothers in the first twenty years, did not leave anything to chance. They paid for third party market research and they also paid for some high quality advertising.

This ad sheet would have been handed out at various confectionery trade events and conventions and may date from 1938 or '39: 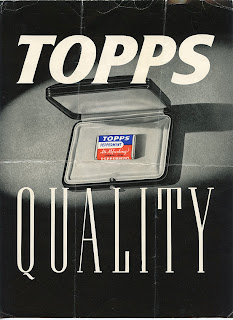 I love the noir-ish, deco-ish look to the ad; it's a very well executed piece and brings home the fact the gum was being marketed to an adult crowd originally. The back is more prosaic: 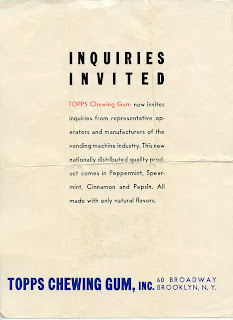 As readers of this blog know, 60 Broadway was where Topps first set up shop in Williamsburg, Brooklyn. The building was known as the Gretsch building, built in 1915 and rehabbed around 2005 into an ultra ritzy condo building. The text really leads me to believe this ad sheet dates right from the startup of the company, although it's possible it was just a little bit later on if over the counter sales of the gum came first.

Topps used the distribution channels established by American Leaf Tobacco Company, another Shorin family business, to quickly establish a national presence for their gum line. By 1940, as we have seen previously, they were well distributed nationally and were about to contract with the US Government to provide gum for military field rations. The 1940's were very good indeed to Topps Chewing Gum.
Posted by toppcat at 7:05 PM