As Steve Martin used to say: "let's get small, real small." As faithful readers of this blog know, probably ad nauseum by now, most early Topps gum products and inserts were quite small, especially in 1948-49, measuring about 7/8" x 1 7/16" at their tiniest. Well lurking on some of the wrappers for these issues is something even smaller.

I first noted today's quarry on a Stop Go wrapper, which would have contained a 1949 License Plate card:

If you look at the upper right portion of the opened wrapper, which is made of very thin paper, on the flap there is a small circle that would have been hidden from view when the pack was sealed. This little circle contains three initials: LBP. Here, take a look for yourself; I made a high-res scan of it:

It took me about three seconds to realize these initials stood for Lord Baltimore Printing, a known producer of the 1954 baseball cards and probably the main printer for Topps until the middle to late 1950's (still working on that part of it folks but they ran off quite a few sets for Topps). I checked a scan of a Pixie Bubble Gum wrapper (not mine) which would have held an X-Ray Round-Up card and found another circle.

Yup, there it is, same spot but in red:

Sorry, that's way blurry but I can't really get it to resolve any better. However, I found another Pixie wrapper without the logo. That wrapper may have been from a second series pack as it was shown with two cards numbered above 100 but I can't say for certain:

It could have been ripped off when the package was opened and it adhered to the other side but I don't think so. Then I noticed it gracing a 1948 dated Magic Photos wrapper (which states Hocus Focus but held Magic Photos: 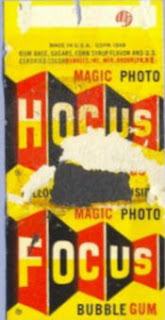 I have not been able to spot the underbelly of a 1949 Magic Photos penny wrapper (which may have been used for the second series),nor have I seen the if the World Coins wrapper has it. Varsity does not, at least on this example:

And I can't tell on this Parade wrapper due to low resolution. If it's there it's dead center on the flap:

I also need to see a '48 Tatoo wrapper but am not certain if they were paper. The larger-sized sets from 1948-49 such as Golden Coin and Flip-o-Vision had a different style wrapper that was probably not made by Lord Baltimore Printing. I think it probable the early non-paper wrappers were a Wisconsin product and there is another story or two there someday buckaroos!

I think the little circle is a clue actually and that it appears on the earliest penny tab issues. Tatoo was probably the earliest of them all but as noted above, I need to sight and feel a wrapper. Magic Photos was likely the next small card set issued, followed by X-Ray Round-Up from what I have been able to determine. The License Plates were probably a little bit later, just before Varsity, which would have been late summer or early fall issue. World Coins probably came after Varsity so my guesstimate is that it does not have the LBP logo. Its also possible Topps switched printers or used more than one for some sets.

So, did the circle disappear sometime between Series 1 and 2 of X-Ray Round-Up? I'll take any and all scans for comparative purposes folks, so send 'em if ya got 'em.
Posted by toppcat at 6:12 PM