The Secret Origins Of The American Leaf Tobacco Company

This post will be part shameless plug and part history lesson. I've been digging deep into the history of the Shorin family and the early days of Topps and their predecessor companies, American Leaf Tobacco Company and American Gas Stations, of late. I'll save my discourse about the latter, much more obscure gas station chain for another day in order to look at the tobacco firm, which I'll dub ALTC for short. First though, my plug for issue #257 of The Wrapper, wherein Les Davis granted me far too much space for a look at these same subjects in an article titled Before Bazooka. 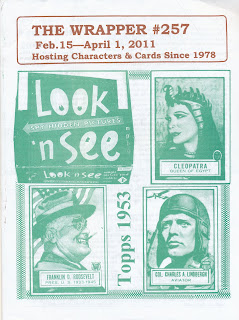 I don't intend to trample on the Wrapper article just yet to allow Les a chance to sell the issue but do want to add some to the back story as I have found out quite a bit more about ALTC since submitting my piece. I'll also save the ancillary stories attaching to the other surprises revealed in the article for another day but suffice to say the early stories of Topps' founding have been greatly burnished.

The standard story goes like this (and does so on about 200 different sites and in dozens of articles):

American Leaf Tobacco encountered difficulties as World War I cut off Turkish supplies of tobacco to the United States, and later as a result of the Great Depression. Shorin's sons, Abram, Ira, Philip, and Joseph, decided to focus on a new product but take advantage of the company's existing distribution channels. To do this, they relaunched the company as Topps, with the name meant to indicate that it would be "tops" in its field. The chosen field was the manufacture of chewing gum, selected after going into the produce business was considered and rejected."

Well, not really as each paragraph above is about half true. I suspect this official story was a creation of Topps' publicity department, created when stories about baseball cards started popping up in newspapers and magazines in the early days of the hobby and the company needed some kind of narrative to supply to the various writers who contacted them. For a couple of reasons, I believe this official narrative to date to the early 1960's but again, that's a tale for another time. Let's go back to the beginning then, shall we?

I have spent the last three months wading through all sorts of genealogy webs, news archives and Google Books sites in search of the primordial Shorin's and can tell you I have not found a single factual reference to the actual founding of the company relating to Morris Shorin. Oh, Morris was real enough and I am certain the ALTC was founded in 1890 but the first problem I encountered was that he immigrated to the United States from Russia in 1892, or two years after the founding date of the company and four years after some accounts indicated he made the Atlantic crossing.

The earliest reference I did find about the company was a commerce directory that showed an address at either No. 22 or 23 Central Wharf (the discrepancy is likely due to the Google OCR software) in Boston and listing a Mr. S. Salomon, late of New York, as proprietor. Further notations revealed the company was indeed founded in 1890 but by the same S. Salomon.

A little more digging yielded a major clue. In January of 1888 there was a spectacular failure of a tobacco importer in New York City called M&E Salomon. Among the 13 preferred creditors whose firms were affected was a Mr. Gustave Salomon. The more I looked, the more Salomon's I found and further digging found a story about the failure of a tobacco wholesaler, also of New York City, called Simon Salomon and Son, which was related to the M&E Salomon meltdown. Simon Salomon's son had the first name of Solomon and it seems probable his full name was Solomon Simon Salomon (wow!).

Maddeningly, I can't yet locate the Salomon family genealogy or reliable census records, primarily due to the 1890 U.S. Census archive being virtually destroyed by fire in 1921. I believe with about 95% certainty that Solomon S. Salomon is the same S. Salomon shown in Boston in 1892, that he is the the likely son of Simon Salomon and was the true founder of American Leaf Tobacco Company.

The Salomon's seem to have been major figures in the New York City tobacco business following the Civil War and their roots extend back even farther than that. I cannot fully determine what happened to send our young Mr. S. Salomon off to Boston following the M&E Salomon crash but he may have wanted to get away from the family mess in NYC for a bit. There is also some anecdotal evidence the family had relatives in Boston so more research is going the be required on that front.

Solomon Salomon was back in New York City by 1895 and 1897 is the first year I can find a citation showing the ALTC domiciled in Brooklyn, where they are listed in a City Directory as being on Throop Avenue, regrettably without a street number shown. I have to think Morris owned, or was at least heavily involved with the company by this time as Throop is exactly one block over from Tompkins Avenue, where the family (who were not called the Shorin's at the time--and no, they were not originally Salomon's) lived. Since all of the Salomon's tobacco business seems to have been conducted in Manhattan and not Brooklyn in the 1880's and 90's, I would estimate Morris could have acquired the ALTC or at least was running it by 1895 when Solomon Salomon was back in New York. There is also some evidence Morris Shorin did not have full control though until 1908; still digging there but the date may just refer to a major incorporation or reincorporation of the firm.

Morris, for reasons that will be explained another day, was not lacking for funds from what I have uncovered so his purchase of another company would not surprise me one bit, especially given the later patterns in business of the Shorin family. The deliberate blurring of the ALTC timeline also fits these patterns.

I was unable to find a picture of any buildings housing American Leaf Tobacco anywhere and considering the company eventually had a global presence, this is another quest I will maintain. I managed to unearth scans showing the Central Wharf well before it was destroyed to make room for a rebuilding project though. Two of the best are shown below.

The first is taken from a stereoscopic view that may predate 1892 but could show #22 or 23 (off to the left of the central cupola, probably within the framework of the two ship's masts in the foreground). 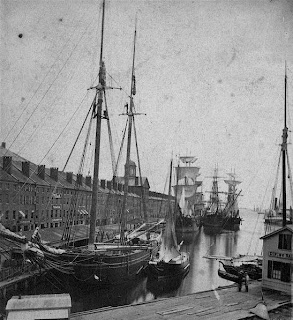 (From the collection of Robert N. Dennis)

Another view, from a 1906 print, shows a colorized Central Wharf but is skewed too far to the right to show the ALTC address (numbering is consecutive, each chimney represents a different address). I can't recall where I nicked this scan from but it's nice, no? 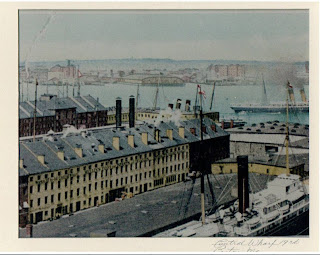 Pretty neat! Much more to come come on the early days as 2011 progresses.
Posted by toppcat at 6:16 PM

Nice work! I'll keep an eye out for future entries.

I'm related to the Shorin's via Morris's wife, Rebecca's, sister, Jessie Jablow. I know your post is a few years old now, so perhaps you'e already discovered that prior to 1920 the Shorins went by the last name Chigorinsky. You will find Morris Chigorinsky and his family listed in the 1900 and 1910 New York City Census in Kings County. I hope that's helpful. If you have any further questions you can contact me at:
jessicagajda@gmail.com

jm-thanks for your input. I actually wrote a book last year (Modern Hobby Guide) that gets into a bit of the family history. It's a free download, just click the link over to the right