I am starting to spend an inordinate amount of time contemplating the world of Topps from 1947-49 and one of the things that keeps popping up is, of course, Bazooka. Bazooka pretty much made the company and its success paid for the good stuff on cardboard to come but Topps first turned to comics before they turned to cards.  After a couple of years selling Bazooka only as a nickel roll, Topps started producing a penny pack of the bubble gum in the fall of 1949.  To launch the product they took out ads in a slew of comic books and then added some extras to entice the kiddies: 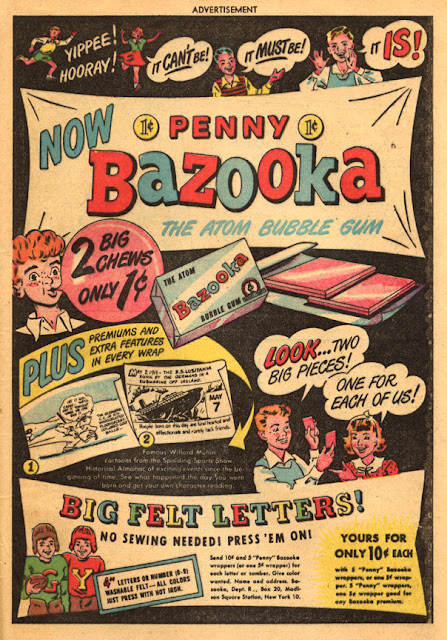 The "twin chew" idea added the idea of value to the product and the inclusion of not one but two comics was a smart move to keep the kiddies looking for more subjects, all the while buying more gum.  The Willard Mullin Spalding Sports Show comics (ACC# R414-1) were on the back of the foil wrapper (and may also have been briefly issued with the Topps Gum "changemakers"as well) as were the Famous Events comics (R711-4 in the ACC, which also gave this issue that name) so it appears you would get either one or the other (and possibly, eventually a third, see below).  Additionally, there was a premium offer for felt letters and numbers, staples of the Topps catalog for many years.  The retailers also got a premium certificate for their own use inside the counter carton, to encourage that they sold as many pieces of gum as possible.
I've covered the Mullin cartoons here before but here'a few more for you to look at. 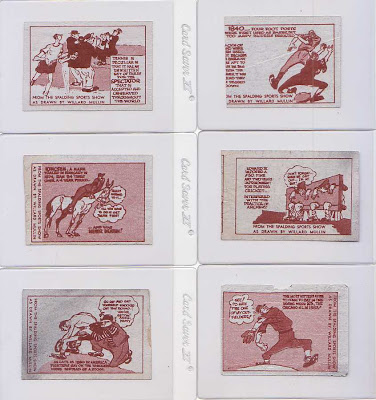 A similar looking "This Day In Sports" and/or "Sports Oddities" type comic also made an appearance, possibly in early 1950; the style looks like Mullin's but I'm not sure this is his work (Update 10/29/20-it's not!): 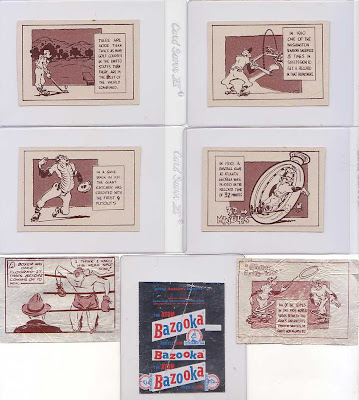 I'll work on getting some more Famous Events scans together but here's a gander at one that actually references some of my ancestors o'the archive: Some dates are associated with more than one event, which makes me wonder if the series was reissued at some point.  Not the prettiest of issues but it does have a certain rough charm, like all of the issues of the period (at least to my eyes).  Apologies to those who sent me the Mullin and Mullin-esque scans as I cannot recall where they originated.
Posted by toppcat at 11:31 PM