This Too I Know

Well a little bit of digging and catching up on my e-mails has led to the title of that Willard Mullin sports trivia comic I wrote about recently.  Jeff Shepherd (who else?) had the details on the set, which is called "Know Your Sports" and appears on both nickel and penny Bazooka wrappers. Penny Bazooka did not exist until late 1949 and Mullin's artwork (who does look to be the artist, despite my wondering if it was someone else last time) seems to be a 1949-50 era license so the timeline makes some sense.
(10/29/20 Update-These are not by Mullin-working on who did them.) 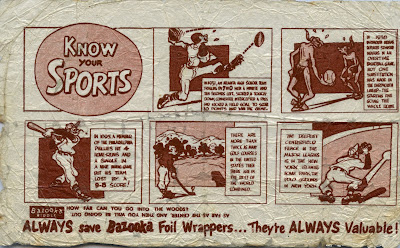 The penny version resembles the Spalding Sports Show comics but lacks the identification on the comic, so these may have been drawn to order for Topps by Mullin.

I have to say I am a huge fan of Mullin's work-the way he presents  the boxer in the above comic is pure genius. Unlike the Spalding Sports Show comics, these do not have an ACC number.  You can see how the panels could be used on either version, another neat little extra.  I am not sure if he added the word balloon to the penny version to make it a little more humorous of if such embellishment depended upon the subject matter at hand.  The Ripleys' Believe It Or Not! mentality is evident in these, common for the times.
Posted by toppcat at 2:42 PM