Up until last month, the largest portions I had ever seen of a 1952 Topps baseball uncut sheet were 5 x 5 card quadrants.  There have been a few pictures and scans published over the years showing purportedly larger partial sheets but upon inspection they have always been stitched together from 5 x 5's or even smaller  chunks. There have also been written accounts of 100 card sheets over the years that have been credible but until Friend O'the Archive John Moran sent this beauty along, 25 card panels were as good as it got: 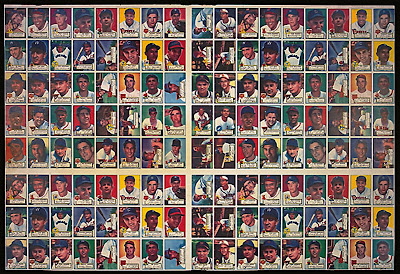 There is a lot going on here.  We have the full 50 card series shown, although not fully realized on each hemisphere, plus what looks to be a misplaced horizontal gutter below the fifth row.  You can see how the left and right sides are cut close and there would have been two more cards on the left side, leftmost  plus a final column hard right.  This was either a proof sheet or something that came off the Lord Baltimore Printing press incorrectly and was pulled (and saved, obviously).  You can see how the left and right sides, if in their full array, would each make up a half sheet of a full, 200 card behemoth.  I originally thought maybe Topps was working in quads but the consensus is that this sheet is just an oddity and shows the break between sections.

The full sheet would then have four iterations of each card and as anyone who collects this set knows, the second series is abundant.  Following the series by sheets (or vice-versa) the first was 80 cards, the second 50, the third 60 and the fourth 60 as well, depositing us at #250.  The fifth series, known as the semi-highs, would run another 60 cards and would be printed in lesser quantities than the previous series.  This, of course, left room for the highs, beginning at #311 (Mantle) and then ending at #407 (Mathews), with three double prints (the Mick, the Staten Island Scot and Jackie) filling the three holes.  I believe that the highs were printed in roughly the same quantities as the semi-high's, as the rationale for issuing the 6th series (which had not been originally contemplated) was that the 5th was selling well.  Topps ultimately compromised the final run by destroying their remaining stock of high's in later years.

I am not certain if Topps would start mixing one series with another as they rolled each out in '52 but they were clearly experimenting with the length of each series as they puzzled out this classic issue.  We thus get  overprints for all but the second series (40 in series one, 20 each in series 3-5) and perhaps some of the counts were influenced by contractual concerns for players who were in Bowman's stable as well. I really like the fact it's still not possible to exactly piece together the story of the 1952 set!
Posted by toppcat at 11:45 AM