Well the 62nd anniversary of the premiere of Hopalong Cassidy has come and gone with nary a nod from the media.  In 1949 it was a different story and when Hoppy was a certified marketing miracle a year later there was press coverage galore.  As we saw last time out, Topps took full advantage and also had two price points on the cards. Since we are in penny arcade mode these days, a look at the penny pack seem appropriate: 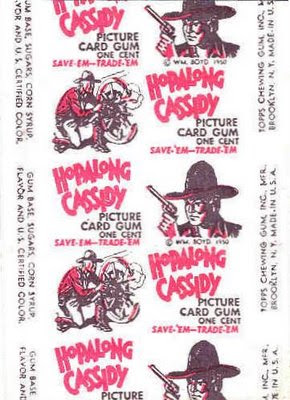 The graphics are great, huh?  The copyright belongs to Willam Boyd (who played Hoppy) and we get Topps Chewing Gum as manufacturer, naturally.  Actually, I shouldn't say naturally since Topps ued about four different corporate identities in the early 1950's but that is another story!  There's also a tougher green version of the wrapper: 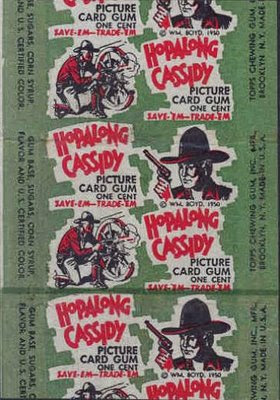 I'm not certain but the green packs may have held the high number part of the release with two additional episodes chronicled.  Topps though, was not don with Hoppy after the highs came out and marketed a short series of lollipop boxes.  The only two good pictures I can find are from Chris Benjamin's Sport Americana Price Guide to the Non Sports Cards Volume 2, published about 20 years ago: 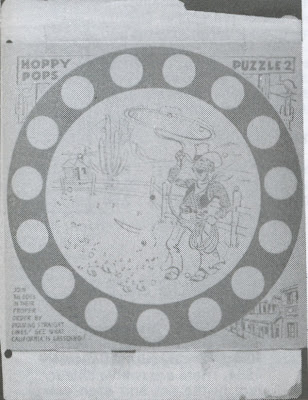 There's at least one other box type out the based upon the puzzle numbering but I'd wager there were a couple more puzzles than that.  The boxes made it to the street in time for Hallowe'en in 1950.  The wrappers limned those used for the cards but with a small difference: 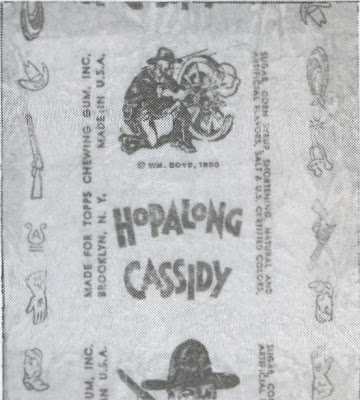 Those would have been twisted around each individual pop. Curiously they state "Made for Topps Chewing Gum" which is odd since Topps owned a plant in Chattanooga, Tennessee at the time that produced candy and table syrup.  While that plant was winding down around this time, I believe it was still quite viable for another couple of years.  They may have had a Brooklyn candy plant as well, still working on confirming that but Topps may have just decided it was easier to buy lolly's than to make them.
Next time we'll look some third party cross promotions that Topps used with Hoppy.
Posted by toppcat at 7:14 AM