Well it's official folks, I am completely flummoxed by the clock at the moment and will be posting a series of shorter posts for the forseeable future.  A combination of personal goings-on, summer vacation, my new gig as a highly compensated columnist for The Wrapper,  a big project (see below) and various real world intrusions have winnowed my timeslice for this blog into an almost invisible fragment.

It's not all bad though, as a lot of of my free time is being spent these days on writing a guide to the early days of Topps, which will be made available when (if?) it's finished as a free PDF download.  When that is, I can't say but I'm hoping it will be around the fall of this year.  So instead of suspending the blog, which I do not want to do, we'll all have to make do with some Penny Arcade posts, purloined Ebay scans and shorter riffs on ancient Topps ephemera for the duration.  I hope to still maintain my twice a week posting schedule though and expect I'll sneak a couple of meatier posts in here and there.

The guide will cover Topps and their history from the founding of the American Leaf Tobacco Company by Morris "Shorin" in either 1890, 1892, 1901, 1904 or 1908 (the last date's a winner methinks) through the end of the Giant Size era following the purchase of Bowman in 1956. Originally I was going to only do a guide to the small, penny tab issues but that morphed into a project that grew and grew and grew.....

So I figured I would present today a look at the one cent wrapper from the first standard size (2 1/2" x 3 1/2") Topps issue, which was Elvis Presley, released in the late fall of 1956.  The Bubbles, Inc. attribution may have meant Topps thought this would be a controversial set.  The penny wrapper is a thing of austere beauty: 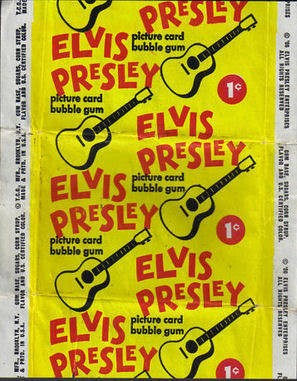 The nickel version was a bit more Elvis-like and a lot more exciting: 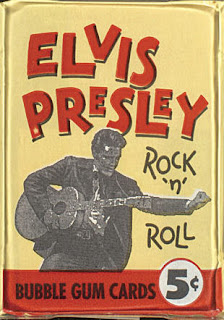 The cards, sadly, are nothing special (unless you were a teenage girl in 1956, I guess): 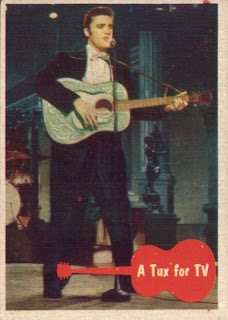 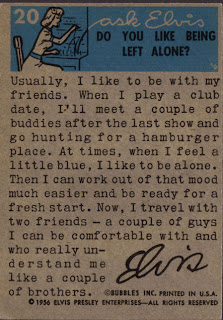 Topps was quickly moving toward retouched photos instead of using artwork by this time.  A partial uncut sheet is known: 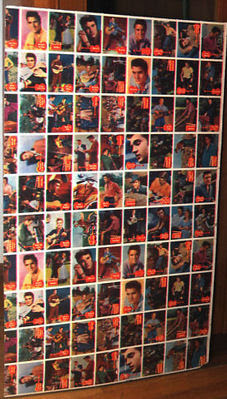 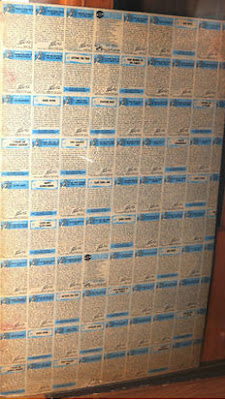